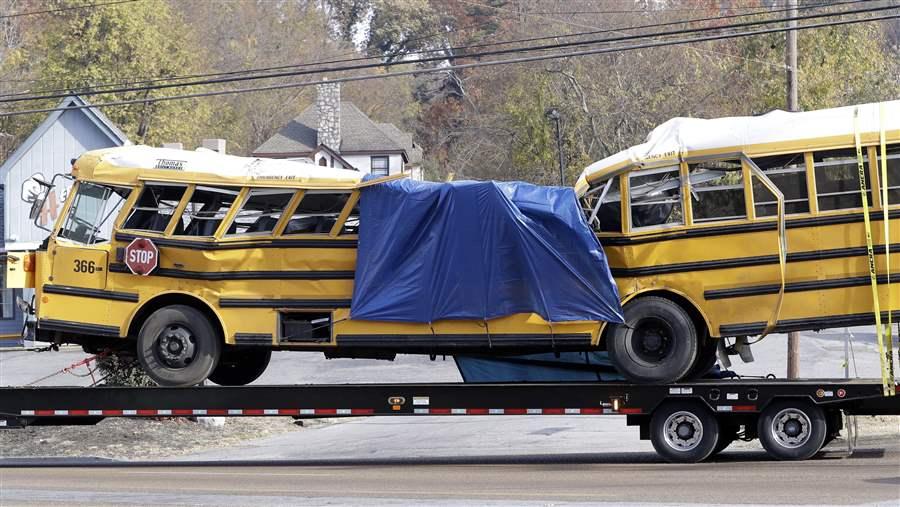 A school bus is carried away from a crash site in November in Chattanooga, Tennessee. Six elementary school students died and 31 were injured. This week, Nevada became the seventh state to pass a law mandating seat belts on school buses.

Nevada Republican Gov. Brian Sandoval has signed legislation that will require new school buses to be equipped with seat belts.

More than a dozen children were injured in a school bus crash last month in Las Vegas, and in the last seven months, students in Massachusetts and Tennessee have been killed or injured in school bus accidents.

The Nevada legislation, which was passed overwhelmingly by the Legislature, requires that any new school bus purchased by a school district on or after July 1, 2019, be equipped with a shoulder-harness-type safety belt assembly for passengers.

Nevada joins six other states — California, Florida, Louisiana, New Jersey, New York and Texas —in enacting laws requiring seat belts on the big yellow school buses that most students ride. In Louisiana and Texas, however, the requirements are contingent upon funds being appropriated by the state, and that hasn’t happened.

Advocates for seat belts on school buses say they should be required to protect children from being seriously injured or killed in crashes. Opponents say school buses are already very safe and question whether children can quickly unbuckle and evacuate in some emergencies. School districts also are concerned about the estimated $7,000 to $10,000 cost of adding seat belts to a new bus.