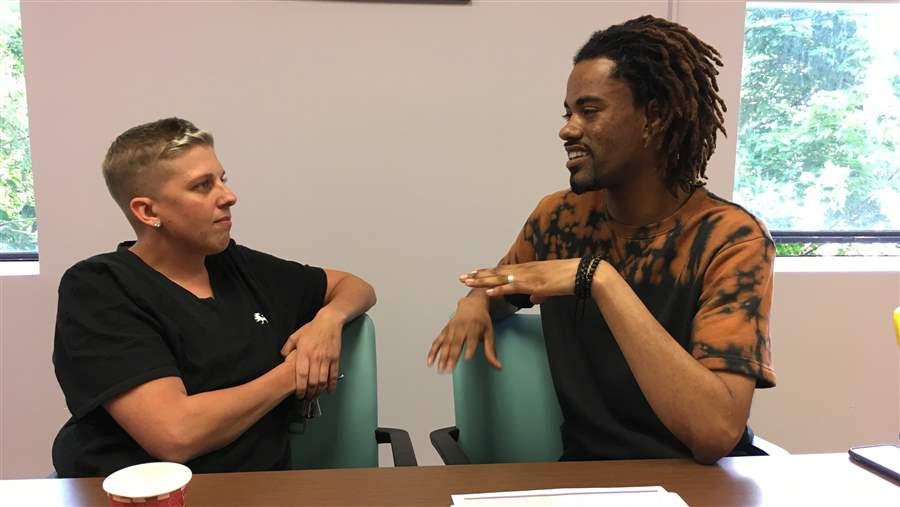 Jamie Longo (left) and Tarik Arafat, “recovery coaches” at Community Health Action of Staten Island in New York, discuss care for people recovering from drug addiction and alcoholism. In recovery themselves, they are among the growing number of trained addiction professionals on the front lines of the opioid epidemic.

NEW YORK — Five months into his job at a 24-hour walk-in behavioral health center here on Staten Island, Tarik Arafat has a new assignment. In three weeks, he’ll be on call for a nearby hospital to counsel people who have just been revived from an opioid overdose.

In recovery from drug addiction himself, Arafat, 25, said he understands why someone in a brightly lit emergency room who uses drugs would be more comfortable talking to him than to a medical professional. “My job is to open myself up and be like a toolbox for them,” he said.

Arafat’s mission, and that of other so-called recovery coaches, is not to convince overdose survivors to get into treatment, but to offer them advice on how to get started once they’ve decided they’re ready to quit. If they’re not interested in that moment, he’ll follow up with phone calls to see how they’re doing after they leave the hospital. He’ll also advise them on how to use drugs more safely, if that’s what they choose to do.

Nationwide, tens of thousands of opioid overdose victims have been saved over the last two decades by first responders, friends, family and bystanders who administered naloxone, an opioid overdose antidote.

But the majority of those who are rescued from near death go back to using drugs as soon as they leave the hospital, pushed by the brutal withdrawal symptoms that accompany an opioid overdose reversal.

In fact, the likelihood of a second overdose among those who survive their first is substantially higher, said Dr. Hillary Kunins, assistant commissioner for New York City’s alcohol and drug abuse agency.

To reduce those odds, New York City, Connecticut and Massachusetts are replicating a Rhode Island program that sends recovery coaches like Arafat to hospital emergency departments to meet overdose survivors and offer them support, whether it’s on the day of their ER visit or weeks or months later.

Officials in at least seven other states — California, Maine, North Carolina, Ohio, Oklahoma, Texas and Vermont — have been talking to the program’s founders over the last year about starting similar programs in their states. And New Hampshire and New Jersey have created similar programs.

And federal money under the Comprehensive Addiction and Recovery Act and the 21st Century Cures Act is available through the Substance Abuse and Mental Health Services Administration to local jurisdictions that want to start pilot recovery coach programs.

Called AnchorED, the Rhode Island program dispatches recovery coaches to the bedside of overdose survivors in every hospital in the state. The coaches let the survivors know what resources are available to help them quit, or how they can reduce their chances of a fatal overdose, if they choose to keep using.

In the three years since it started, AnchorED’s recovery coaches have counseled more than 2,000 overdose survivors, with 87 percent of them opting to engage in some type of recovery service after being discharged from the ER, according to Michelle Harter, director of the state-funded program.

Not all of those who engage in recovery services — such as detox, spiritual guidance, medication-assisted treatment, peer counseling, job training and nutrition programs — end up quitting drugs, Harter said. “But we help them get started on a recovery pathway of their choice.”

The plan is to set up similar programs in seven more hospitals by 2019, at an annual cost of $4.3 million. While the hope is that more people will get into treatment, the city’s primary goal is to reduce overdose deaths, Kunins said.

In addition to offering overall support, recovery coaches in New York’s program will talk to survivors about where to find drug treatment and mental health services and how to pay for them, as well as how to reduce their risk of a fatal overdose.

They’ll distribute naloxone kits, train survivors and their friends and family on how to use them, and tell them where they can get clean syringes and needles to avoid contracting HIV/AIDS and hepatitis C.

Here on Staten Island, Arafat will rely on his colleagues at Community Health Action of Staten Island, located in a freshly painted new headquarters on Bay Street, to provide counseling and support services and to make referrals to local mental health and addiction treatment providers. He’ll take calls about overdose patients from nearby Richmond University Medical Center during his regular shift, 4 p.m. to midnight. Two other recovery coaches will cover the rest of the day. They expect to receive roughly one call a day because the hospital is taking in on average 30 overdose survivors a month.

In general, the job of a recovery coach is to help overdose survivors stay alive and as healthy as possible and, when they’re ready, work on their own personal goals for recovery. “I know that no one could talk me into getting treatment until I was ready,” he said. “I feel like this is what I was meant to do.”

Recovery coaches — sometimes called peers, peer professionals, outreach workers or people with lived experience — are not new. They’ve been working with people with mental illness and drug addiction for decades and they have proven highly effective at gaining patients’ trust and engaging them in programs designed to improve their health and long-term survival. As the opioid epidemic spreads, their numbers are increasing.

More than 33,000 people died of an opioid overdose in 2015, and with the advent of fentanyl and other powerful synthetic opioids in the illicit drug supply, the number of deaths is increasing dramatically, according to the Centers for Disease Control and Prevention.

New York’s Kunins says the city’s experience with the HIV/AIDS epidemic in the 1980s will be helpful as it dispatches peer recovery coaches to hospitals to try to reduce overdose deaths. Back then, the city was among the first to enlist peer professionals to meet injection drug users at needle exchanges and warn them about the dangers of the deadly disease and offer them help, she said.

“What set us up to do this work is the availability of these recovery organizations throughout the city and our historical knowledge that it’s important to tell people about them,” she said.

In Rhode Island, George O’Toole was the first recovery coach dispatched to an emergency room when the program started, in July 2014. He was on call from 8 p.m. on Fridays to 8 a.m. on Mondays. But demand was so high hospitals started calling him throughout the week, too.

By 2015, AnchorED was sending recovery coaches to 10 hospitals around the clock, seven days a week. Today, O’Toole manages a staff of 20 coaches who assist not only opioid overdose survivors but people who come into emergency rooms for drug- or alcohol-related problems.

Anchor Recovery Community Centers, the umbrella organization that runs the Providence-based program, also offers a mobile outreach service. Recovery coaches meet people in homeless shelters, tent cities and soup kitchens in and around Providence to tell them about recovery services they can access. “Most of the people they talk to have no idea these services are available,” O’Toole said.

There are no hard numbers, but O’Toole guesses that only about one in five people who land in Rhode Island emergency rooms after an overdose consents to seeing a recovery coach. An emergency room nurse or doctor asks them if they would like to talk to someone about recovery and harm reduction services and most refuse, he said.

“I get that. They just overdosed. You ruined their high. They’re embarrassed, ashamed, and don’t want to hear about it,” he said. “The ones who agree may already be motivated. They realize they just died and got brought back to life, and they need a plan for how that isn’t going to happen again. That’s why we’re here.”