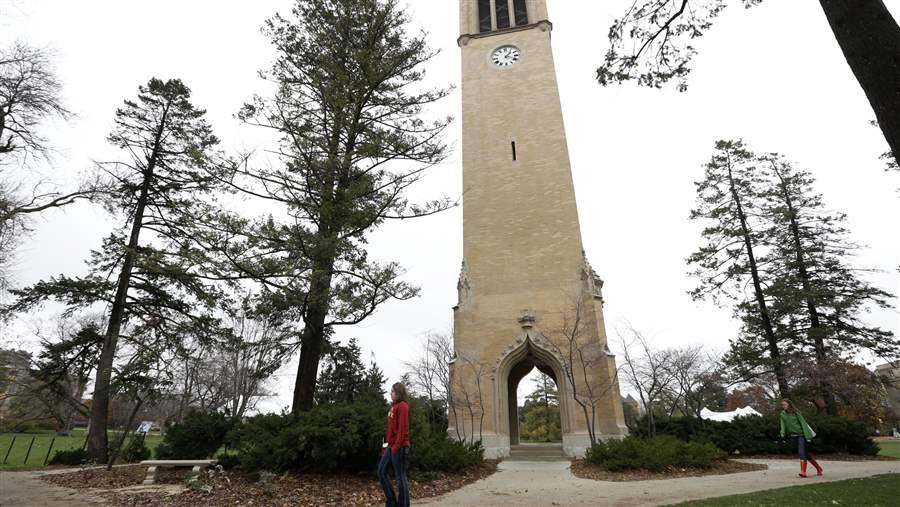 Students walk past the campanile at Iowa State University. Iowa State is among the universities that charge higher tuition to students in certain programs.

Tuition prices listed on college websites have long been divorced from what students actually pay. The students strolling through campus pay very different amounts depending on their financial aid awards.

But recently, many colleges have added a new complication: Sixty percent of public research universities now assess tuition based on students’ year of study, major, or both, according to an upcoming study led by Gregory Wolniak, a research director at New York University.

At the University of Illinois at Urbana-Champaign, for instance, undergraduates in the College of Business were charged 42 percent higher in-state tuition — about $5,000 more — last year than undergraduates studying, say, English. Art students paid an additional $1,600, not counting additional fees to cover the cost of art supplies in certain classes. Even journalism majors have to kick in an extra $780 in tuition.

Universities say they need the additional money to cover the cost of expensive programs. And in some states, governors have encouraged so-called differential tuition, or program fees, as alternatives to across-the-board tuition increases.

But other policymakers and advocates for students worry that surcharges will drive young people away from subjects important to the state economy, or shut low-income students out of majors that lead to lucrative jobs.

“We’re trying to produce more [science, technology, engineering and mathematics] degrees and raising the price would be a disincentive,” said then-Maryland Gov. Martin O’Malley, a Democrat, in 2012, criticizing the University of Maryland’s request to raise the price of some science and engineering programs. The university and its Board of Regents approved increases for engineering, business and computer science programs three years later. 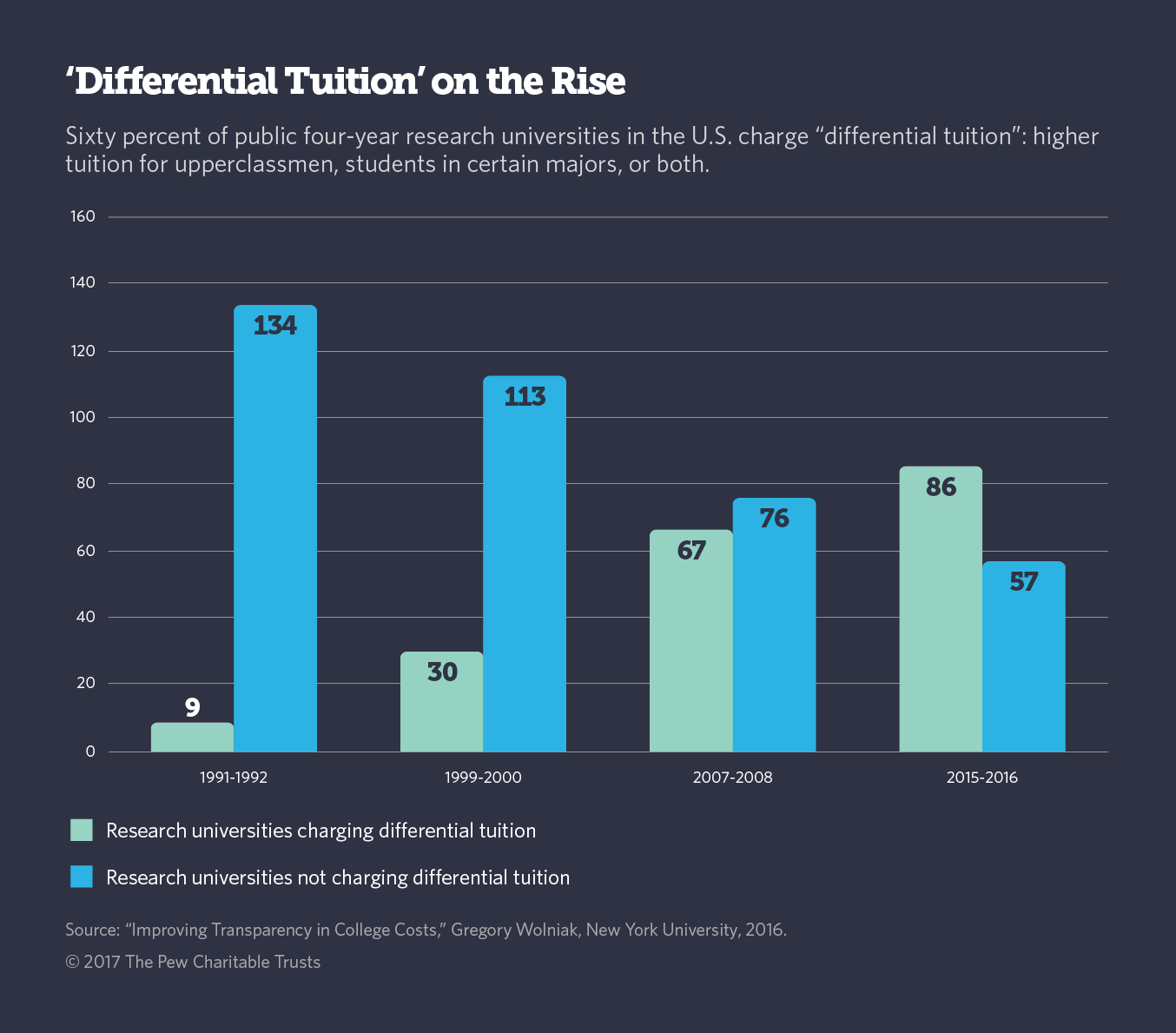 It’s hard to say if differential pricing is changing students’ decisions. Officials at universities that have differential tuition say their more expensive programs are as popular as ever. And as Wolniak’s research team found, information about higher tuition and additional fees isn’t always clearly communicated, so that students and parents might not know about it.

The six graduate students on his research team, who scoured university websites for tuition information, frequently reached different conclusions for the same university. Sometimes notice of a program fee would show up in the footnotes of a PDF file on the bursar’s office website. Some universities only provide cost information by credit hour.

“Things should not be this opaque,” Wolniak said.

In 2015, 86 of 143 public research universities had a differential tuition policy, Wolniak and his colleagues at Arizona State University and the University of Louisville found. Back in the early 1990s, just nine institutions did. In the working paper they’re circulating, the researchers say differential tuition is particularly common in the Midwest.

A survey conducted by Cornell researchers in 2011 found that universities most often charge more for business, engineering and nursing programs.

The math doesn’t include fees for individual courses, which make calculating the real cost even more complicated. For instance, at the University of Michigan, freshmen and sophomores spend $1,000 more per year to study engineering than to study film, and juniors and seniors pay $3,644 more.

But many film studies classes have a fee attached, such as a course in writing feature-length screenplays ($150) and a dramatic narrative course that gives students access to high-tech movie production equipment ($200). Depending on the classes they take, film students could end up paying hundreds of dollars more than the posted price. 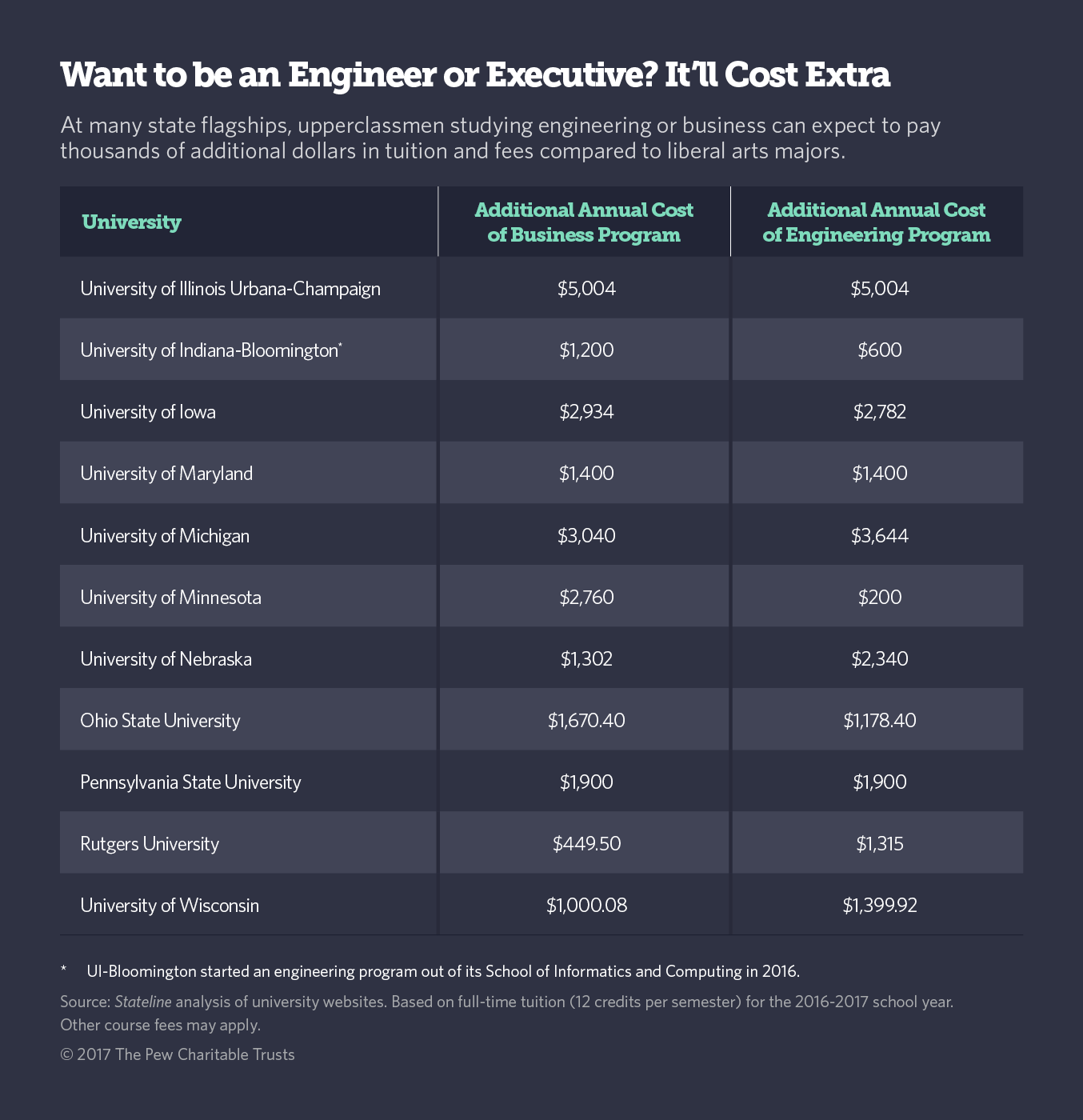 University officials give a simple reason for why they charge additional tuition to students in some majors. “Certain majors and programs are just more expensive to provide than others,” said Sue Curry, University of Iowa interim executive vice president and provost.

Engineering classes require specialized equipment, for instance. Business and computer science faculty expect salaries comparable to the private sector. Small class sizes are a must in nursing programs. And coordinating internships and clinical experiences takes a lot of university resources.

And business and engineering students pay even higher prices as upperclassmen, when they’re enrolled in more intimate, advanced classes. Curry said the pricing makes sense because students who pay extra are taking classes that cost the university more. She also noted that graduates of the three more expensive programs typically go on to make good money.

Former Virginia Gov. Bob McDonnell encouraged universities to adopt differential tuition during his time in office, from 2010 to 2014. “Using some basic market and economic principles, this approach makes sense,” the Republican said in an email. “If it costs more to produce the degree, and your earning potential when you get out is more, meaning you can pay off tuition debt faster, then the value of the degree, purely in financial terms, is greater.”

Falling state funding, which has pushed up tuition nationwide, has influenced many universities’ decision to charge more for certain programs.

In Iowa last year, less-than-expected state funding led the university system and Board of Regents to approve a 2 percent tuition increase for in-state students and increases for out-of-state students that varied depending on the university. The board approved even larger tuition increases for many of the eight programs across the three universities that already had differential tuition.

The tuition increases will be reinvested in the programs — to buy livestock for the animal science program, for instance, university officials say.

Administrators wanted to expand differential tuition because they were concerned that falling funding — combined with eight years of enrollment increases — would lead to lower-quality programs, said Jonathan Wickert, senior vice president and provost at Iowa State.

“We are an institution with very economical and affordable tuition. That’s important to us,” he said. “But at the same time, we want to balance that affordability with the quality of the program.”

Wickert and his team met with students to discuss the new pricing. They pointed out that Iowa State tuition would remain lower than its peers and shared data on program cost. In biology, for instance, about 40 percent of class time is spent in laboratories, which require professional staff to maintain.

Cole Staudt, who served as Iowa State’s student body president last year, wasn’t a fan of the decision to charge more for certain majors. He preferred an earlier idea floated by the university president: to charge all upperclassmen a little more.

“We don’t want students who come to Iowa State — or come to college in general — who are low-income, or first-generation, and can barely afford to come to college in the first place, to choose a major based on cost,” Staudt said. If only affluent students can afford the expensive majors at Iowa State, and those majors all lead to higher-paying jobs, that just perpetuates inequality, he said.

Then-Gov. Terry Branstad, however, had a different worry. “My concern is that a lot of our students are starting out at the community colleges because they can’t afford to go to the state universities,” the Republican told reporters last September. “We don’t want to penalize them by having higher tuition for them in their junior and senior years.”

Meanwhile, at many state universities, fields like computer science and engineering are becoming more expensive.

Advocates for low-income and minority students have criticized differential tuition, saying that even a modest tuition or fee increase can leave students scrambling to pay for school. At four-year colleges, which are already expensive, “any additional cost you take on absolutely has an impact,” says MorraLee Keller, director of technical assistance at the National College Access Network.

Keller said that the more cost information gets broken down by program and by course, the harder it is for families to figure out the price. “There’s a possibility that you’ll only find out when your bill arrives,” she said, particularly if the information isn’t easy to find online, or clearly communicated by a college admissions officer or high school guidance counselor.

Few researchers have studied differential tuition’s effect on students. A 2013 statistical analysis by University of Michigan researcher Kevin Stange suggests that raising the price of an engineering program may lower the number of women and minority students who enroll. The impact on business programs and nursing programs was close to zero.

University leaders say differential tuition hasn’t hurt their enrollment or graduation rates. In fact, Iowa State’s Wickert said that since the university raised engineering tuition in 2005, the program’s popularity has soared. “One in four students on our campus is studying engineering, perhaps because of differential tuition that has built the quality of the program,” he said.

Business is the most popular bachelor’s degree in America, according to federal statistics. Health professions are the second most popular. From 2008 to 2014, the number of engineering degree awards shot up by 29 percent.

Students and families are often willing to pay more for a program with a good reputation. That gives universities leeway to raise tuition. “There’s no doubt that institutions are trying to charge what the market will allow them to charge,” said David Strauss, principal at the Art & Science Group LLC, a higher education consulting firm.

Savvy students may be able to game a differential tuition system — declaring one major, taking a bunch of courses outside it, and then switching at the last minute, said Staudt, Iowa State’s former student body president. “Another argument we put forward is — where does it stop?” he said. Given the state’s budget situation, he said, different strategies for raising tuition will likely continue to be discussed. 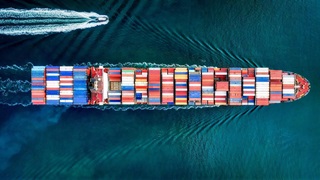 The Role of the Seafood Supply Chain in Sustainable Fisheries