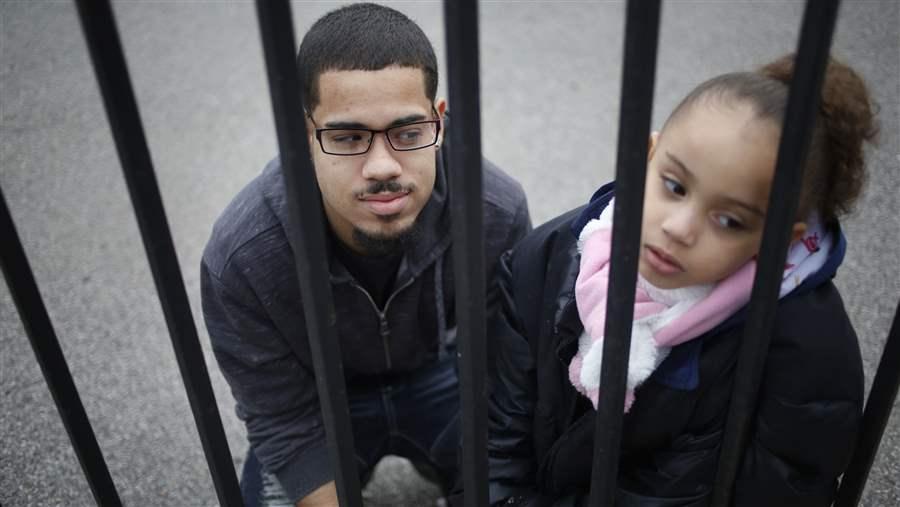 Luis Padilla with his daughter, Isabella, near their home in New York. Padilla was arrested at 16 and sent to Rikers Island. A new law in New York will raise the age of criminal responsibility to 18 by 2019.

You have to be 18 to vote in a general election or join the military without your parents’ consent — and you’ve got to be 21 before you can belly up to the bar.

But in some states, if you’re under 18 and you break the law, you’ll be treated as an adult, no matter how slight the crime — even if it’s just jumping a subway turnstile or shoplifting.

Sixteen-year-olds in New York and North Carolina are still funneled through adult criminal courts and housed in adult prisons and jails. In Georgia, Michigan, Missouri, Texas and Wisconsin, 17-year-olds are automatically prosecuted as adults.

Raising the age can have a huge impact on the lives of young people. Teens funneled into adult prisons do not have access to rehabilitative services that the juvenile justice system provides. And adult prisons can be extremely dangerous for teens.

Prosecuting minors as adults used to be more common. But the practice has declined amid increasing awareness that young people, with brains that are still developing, may not fully understand the consequences of their actions, as well as evidence that teens are more likely to commit additional crimes if they are prosecuted as adults.

Over the past decade, at least seven states have raised the age of criminal responsibility to 18, and today most states set it there. And more changes are on the way.

And this month, after years of debate, the North Carolina House overwhelmingly passed a bill that would raise the age of criminal responsibility to 18.

North Carolina state Rep. Duane Hall, a former public defender who sponsored the legislation there, said he’s seen how a permanent adult conviction can destroy a young life. “A kid who gets into a fight at a football game in North Carolina could have an adult conviction,” the Democrat said.

Meanwhile, lawmakers in Georgia, Michigan and Missouri are considering legislation that would raise the age of criminal responsibility from 17 to 18. (A similar bill failed to make it to a vote in Wisconsin last year because of concerns over cost.) Since 2007, Connecticut, Illinois, Louisiana, Massachusetts, Mississippi, New Hampshire and South Carolina have all enacted laws raising the age to 18.

Some states are taking things a step further: In February, Connecticut Gov. Dannel Malloy, a Democrat, introduced a bill that would make the state one of the first to raise the age of criminal responsibility to 21. And last year, Vermont enacted a law that will gradually raise the age of criminal responsibility from 18 to 21 by July 2018 and create a separate prison for incarcerated youth up to age 25.

The goal is to steer older teens into the juvenile court system, where they can participate in counseling and diversion programs such as substance abuse treatment and educational assistance.

By charging and convicting adolescents as adults, Ginsburg said, “you basically create a whole class of people who cannot be employed and cannot obtain housing for no other reason than we decided to hold them accountable for things that they did when they were young.”

There are several reasons behind the nationwide push to raise the age. One is the growing awareness that young brains aren’t fully developed until around age 25 and youth don’t fully understand the consequences of their actions.

Advocates also point to evidence that teens who’ve been arrested are less likely to commit additional crimes if they are prosecuted as minors, and to the fact that young people incarcerated in adult prisons are at a much greater risk of sexual assault than adult offenders.

Funneling more teens to juvenile courts initially may increase costs for state and local governments. But evidence suggests that prosecuting more youthful offenders in juvenile justice courts will save taxpayers money as recidivism rates are reduced and more youth are able to lead successful lives, earn a living, and contributing to the local economy.

But some critics, such as the Brooklyn NAACP, argue the New York law doesn’t go far enough to protect children. Others, such as Bill Fitzpatrick, the district attorney for Onondaga County in upstate New York, argue the measures go too far.

“What are we going to do, raise the age to 26?” said Fitzpatrick, who serves as chairman of the National District Attorneys’ Association. “The overwhelming majority of [prosecutors] recognize there’s a difference between a 16-year-old and a 36-year-old, and we attempt to deal with them appropriately.”

Relatively few young offenders are incarcerated in adult facilities, Fitzpatrick pointed out. In 2015, state prisons held an estimated 1,000 prisoners 17 or younger; federal prisons in April held 21 prisoners under 18 and 2,204 inmates 18 to 21 years old. Meanwhile, in 2015, fewer than 4,000 juveniles were in local jails.

“There’s so much misinformation out there about juveniles being locked up and treated inappropriately,” Fitzpatrick said.

Elizabeth Clarke, executive director of the Juvenile Justice Initiative, an advocacy group based in Evanston, Illinois, that pushed to raise the state’s age of criminal responsibility to 18, said young people do better in the juvenile justice system, where the focus is on individual rehabilitation.

“There’s no good that comes for kids out of adult court,” Clarke said. “It’s not a deterrent. This is really about what works and what’s been shown to work.”

Under the adult system, police were limited to two options: Arrest a suspect and send them to court or don’t arrest and send them home. But the Illinois law meant greater leeway for handling 17-year-olds. Because they now are automatically treated as juveniles, police can send them to counseling, make them do community service, or simply make them write a letter of apology.

As a result of the law and other programs focused on rehabilitating troubled teens, the number of youth in the juvenile prison population has dropped from 1,195 to under 400 today, according to a Juvenile Justice Initiative analysis of Illinois Department of Juvenile Justice data. Three of the state’s eight juvenile prisons have closed, and the number of youth held in pre-trial detention also dropped 13 percent between 2011 and 2015, Clarke said.

In a report this year about the potential ramifications of raising the age in North Carolina, Jon Guze, a director of legal studies with the John Locke Foundation, a conservative think tank based in the state, cited research finding that recidivism rates are significantly lower when young offenders are pushed through the juvenile justice system.

But, she said, “States that have raised the age have not seen their juvenile court systems crushed by the numbers.” A 2011 Vera Institute study found that if North Carolina raised the age to 18, the state would save $52.3 million a year.

After Connecticut passed its “raise the age” law in 2007, the state ended up spending slightly less on its juvenile justice system than it did before the age was raised, according to the Justice Policy Institute.

Arrests of 15- to 19-year-olds decreased 60 percent between 2008 and 2015, according to data compiled by the state’s Office of Policy and Management. The number of 16- and 17-year-olds in the adult prison population dropped by three-quarters between 2009 and 2016. The number of 18- to 21-year-old prisoners fell more than half.

“We can’t prove cause and effect here,” said Mike Lawlor, the state’s undersecretary for criminal justice policy and planning who sponsored the 2007 bill when he was a Democratic state lawmaker. “But you could theorize that if youth are being handled differently, then fewer and fewer are ending up in prisons as adults down the road.”

New York’s raise-the-age law is complicated, the result of years of haggling from both sides of the aisle.

The legislation ensures young people who commit nonviolent crimes will receive intervention and treatment. Young people will no longer be held at the notorious Rikers Island prison complex after October 2018. And people of all ages who have been crime-free for 10 years can now apply to have their criminal records sealed.

All misdemeanors will be automatically referred to family court, which handles juvenile cases. Youth charged with felonies will be treated a little differently. Their cases will be heard in a special part of adult criminal court where a family court judge will preside. No youth will be housed in adult prison facilities or jails.

“Is it the law that I would’ve written? No. But it’s a political process,” Ginsburg of the Legal Aid Society said. “The vast majority of the kids will be out of the adult system. It’s a strong first step. But there’s certainly more work to be done.”