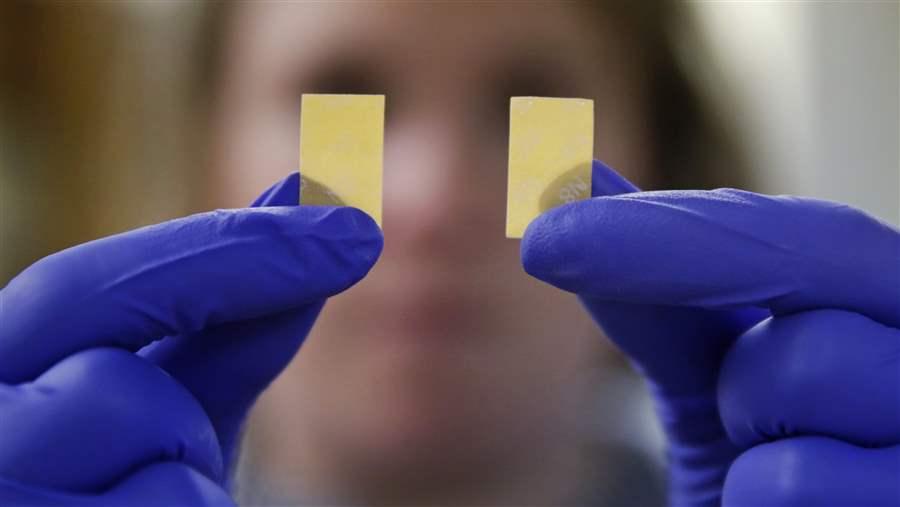 An investigator with the New Hampshire Department of Corrections shows Suboxone strips found in a smuggling attempt. The state recently banned kissing between inmates and visitors and removed board games and vending machines from visiting rooms in an attempt to stop the flow of drugs.

In New Hampshire, a new rule bars inmates and their visitors from hugging for more than three seconds. In Virginia, prisoners now must change their underwear before and after receiving a visitor. And states across the country are placing new limits on what kind of mail inmates can receive.

All of the changes are designed to keep drugs, especially opioids, out of prison.

Of particular concern is Suboxone, an addiction-treatment drug whose razor-thin strips, designed to be placed under the tongue like breath strips, are easily hidden. The drugs can help tame withdrawals for those already addicted to opioids or provide a mild high to those who are not.

Once affixed to something, Suboxone strips leave a pale yellow outline. Prison officials have found the strips hidden under postage stamps and concealed by crayon drawings. In visiting rooms, people have transferred the drugs to each other during embraces and hidden them in packages of food from on-site vending machines.

Drugs have long been a problem in prisons, but the opioid epidemic is straining the resources of prison staff in a way other drugs have not. Prison officials say they cannot stand by as the drugs cause overdoses and spur gang activity. And, they say, they have generally moved to limit inmates’ contact with the outside world after it’s been shown as an avenue for drug smuggling.

But critics question the effectiveness of the strategies they are employing, and say they unfairly restrict the rights of prisoners and their visitors while ignoring the possible role of prison staff. 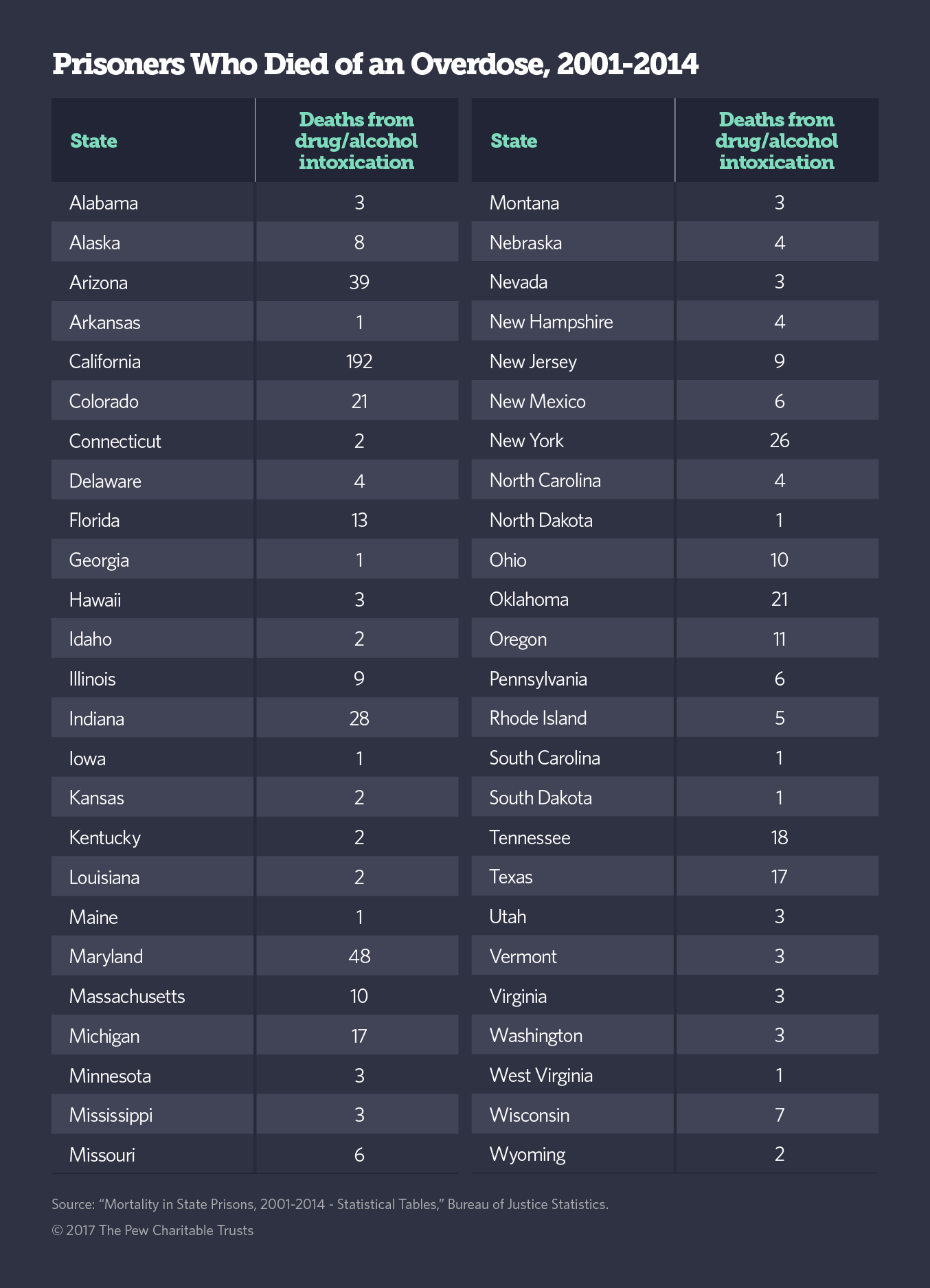 New Hampshire rolled out its policy in January, spurred by four overdoses earlier that month, one of which was fatal. In addition to the time limit on hugs, the state banned kissing between inmates and visitors and removed board games and vending machine food from visiting rooms.

Inmates in one prison protested the new rules with a hunger strike. At another New Hampshire facility, inmates set trash on fire, and corrections staff used pepper spray and a taser to quell the rioting.

“We don’t have corrections officers sitting there with a stopwatch,” said Jeff Lyons, a spokesman for the New Hampshire Department of Corrections. But, he said, staff will break apart a hug if it goes on too long, and inmates are expected to keep their hands visible throughout a visit.

In 2015, the state tried to stop Suboxone coming through prison mail by banning greeting cards, drawings and colored paper. The state is still battling the American Civil Liberties Union of New Hampshire over the policy, which the group’s legal director Gilles Bissonnette said is “particularly punitive to inmates who have a child family member who can only communicate through drawings.”

In Virginia, where inmates usually wear jeans and button-up denim shirts, a rule that took effect in April requires male prisoners to change into jumpsuits that zip in the back before they can go into a visiting room. The new policy also requires them to change into new underwear and the jumpsuit while in view of staff and to undergo a strip search before and after visits. The state also now gives inmates photocopies of their mail, rather than the original documents, and limits envelopes and their contents to six photocopied pages.

A department spokesman said the policies were implemented in response to nine inmate deaths over the last two years resulting from overdoses of heroin and fentanyl, a synthetic opioid. Since 2016, drugs have been caught in the mail 20 times across the state prison system, and 70 visitors have been caught trying to sneak drugs into prisons, the spokesman said.

In Maryland, the state introduced a policy similar to New Hampshire’s limits on hugging and kissing in 2015.

“Literally an embrace can allow them to introduce contraband into a pocket, the collar of shirt, under their armpit — I don’t want to give people ideas. We’ve seen it all,” said Gary McLhinney, who helped develop the policy for Maryland’s Department of Public Safety and Correctional Services.

In July 2016, the department successfully lobbied Maryland’s health department to remove Suboxone strips as a treatment option for people on the state’s Medicaid program, arguing corrections officials have an easier time stopping the smuggling of pills. So far this year, the state has found 1,886 Suboxone strips in prison facilities, compared with 2,217 for the same time period last year.

Prison officials in several states have had to rush to administer life-saving drugs to inmates who are overdosing on illegally obtained drugs. Inmates have even overdosed in areas with high security like death row in California.

Across the U.S., drugs and alcohol are responsible for 1 percent of inmate deaths, according to the Bureau of Justice Statistics. Drug tests of roughly 10 percent of California inmates in 2014 showed nearly 8 percent tested positive for drugs, with 4 percent showing opiate use.

The dangers of such drugs go beyond overdoses. Kirk Cassavaugh, a New Hampshire inmate serving two life sentences after being convicted of two murders, said by phone that some prisoners will run up debt with other inmates who supply drugs. That can lead to violence inside the facilities and sometimes corrections staff must keep the inmates separated.

Amid criticism of expensive video visits and research that suggests prisoners who maintain contact with relatives are less likely to reoffend, prison officials say they are reluctant to curb in-person visits.

But they insist that some new restrictions are necessary.

“We are responding to a serious situation. We try to be open and allow prisoners as many privileges as we can, but when they start abusing those privileges we have to take action,” said Lyons, adding that the state catches visitors trying to sneak drugs into prison about once a month. “If we weren’t seeing drugs coming into mail room and visiting rooms, we wouldn’t have taken action like that.”

Some prisoners complain that the actions of a few have resulted in the loss of privileges for many.

Cassavaugh said his visits with his 82-year-old grandmother are a lot less rewarding now that they aren’t allowed to eat snacks and play cribbage. He’s collecting signatures on a letter to the governor protesting the new rules.

“I don’t want her to make that four-hour round trip for a three-hour visit that isn’t that enjoyable,” he said. She has already cut her weekly visits back to every other week.

In any case, Cassavaugh said, the measures are no match for addicts who will try anything to get the drugs they crave.

“We got nothing but time. If that’s what your thing is then that’s all you think about,” Cassavaugh said of drug users in prison. “A good number of people in here have substance abuse issues, so at that point they’re going to sit down and brainstorm. ‘How can we get this? How can we get our fix.’ They don’t care about the consequences.”

California spent nearly $15.3 million on a pilot program to curb drug and contraband issues, only to see mixed results.

Under the three-year program, which ended last year, 11 prisons received additional drug-sniffing dogs and ion scanners similar to those used at airports. Three of the prisons also used full body X-ray scanners for inmates and video surveillance of visiting rooms.

The state is now planning to use more drug-sniffing dogs in all of its facilities, though Steven Raphael, a University of California, Berkeley, professor and one of the study authors, said the study did not indicate that method would be more helpful than any other.

“You ultimately have employees coming into facitilies, and a lot of them are not adequately searched when they enter,” he said, adding that a few bad actors are responsible for most of the drugs entering the system. “The vast majority of correctional officers don’t smuggle in drugs, but the vast majority of visitors don’t either. It doesn’t make sense to only go after one group.”

Some big prison drug busts have involved staff. Eighteen correctional officers were charged in Maryland last year after they were found to be taking bribes from inmates — the going rate was $500 to sneak in a package — and accepting sex from inmates as payment. Thirty-five inmates and 27 people outside of the prison system were also charged.

And in New Hampshire, one staff chef was caught in 2015 trying to smuggle in more than $67,000 worth of Suboxone, and is now serving time in prison. But reports from the state’s corrections department show that in many cases, the drugs intercepted by prison staff were brought in by relatives and friends of inmates.

Lyons said the state will start using X-ray scanners to find drugs and that both inmates and prison staff will have to use them, though staff will not be scanned as often.

“If staff is going [in and out] six, seven, or even eight times a day, we don’t want to subject them to those rays,” he said. “That’s why we want to make it random.”

Some doctors and researchers also suggest trying to address the demand rather than the supply.

Raphael said drugs and other contraband like cellphones could be dealt with by giving prisoners better access to what they might want: cheaper phone calls on prisons lines and drug treatment therapies.

Few prisons have medication-assisted treatment programs at their facilities, though the list is slowly growing. Rhode Island’s correctional system began offering one about nine months ago.

Jennifer Clarke, medical program director for the Rhode Island Department of Corrections, said it can be a big cultural shift to provide drugs like Suboxone to people who have an opioid addiction. But she said the Food and Drug Administration-approved treatment is successful and should be open to inmates.

“If we are treating people who use opiates, if we’re giving them the same treatment within prison that they can get on the outside, a treatment that helps them stop using opiates at a higher rate, it’s likely the same thing will happen on the inside,” she said.