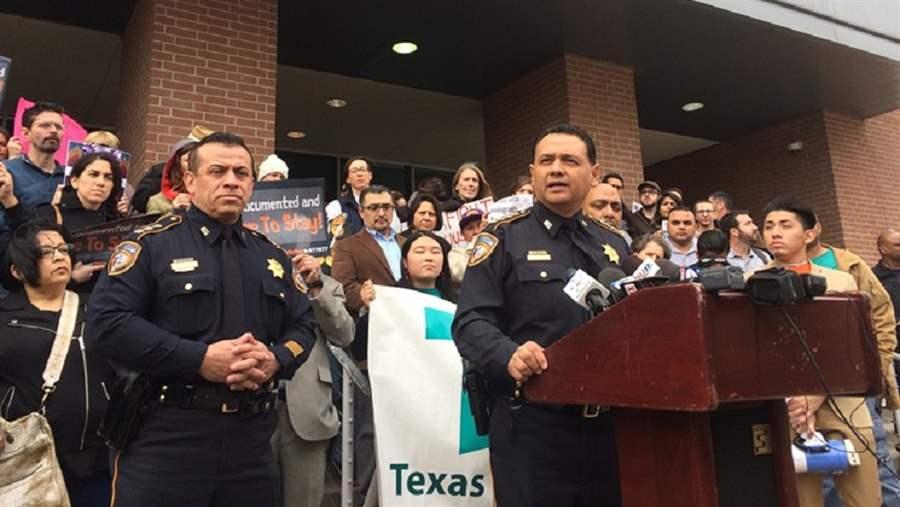 FREDERICK, Md. — In a whitewashed cinderblock room here at the Frederick County Detention Center, each new inmate answers two questions: “What country were you born in?” and “Of what country are you a citizen?”

A sheriff’s deputy will investigate any inmate who says he was born in another country, using computer equipment and databases provided by U.S. Immigration and Customs Enforcement (ICE). Those found to be in the country illegally could face extra jail time and deportation.

The Sheriff’s Office in this western Maryland county is one of 41 law enforcement agencies, generally county jails run by sheriffs, who have agreed to help federal immigration authorities deport unauthorized immigrants in what are known as 287(g) partnerships. The participants stand in stark contrast to “sanctuary cities”: Instead of declining to cooperate with federal immigration officials, these sheriffs have volunteered to investigate the immigration status of prisoners when they book them.

Despite concerns about the added personnel costs and the possibility of being sued for civil rights violations, a variety of local officials, from conservative sheriffs in Texas to a liberal county executive in New Jersey, have embraced the program.

Many sheriffs who are participating cite a desire to investigate prisoners as soon as possible, to root out those with serious criminal histories before they are released on bail. Some of the sheriffs, especially along the Southwest border, say they want to help federal authorities protect national security. Many of them agree with President Donald Trump that it’s time for a crackdown on illegal immigration.

“I think the general populace is tired of illegal immigration — tired of the costs and tired of being victims of crimes,” said Frederick County Sheriff Chuck Jenkins.

In New Jersey, Hudson County Executive Tom DeGise, who describes himself as a liberal Democrat, said he wants his New York City suburb, where 42 percent of residents are immigrants, to continue taking part in the program as long as it targets only violent criminals.

“Serious criminals, especially those who commit sexual assaults against women and children or engage in violent felonies don’t deserve to remain in this country to prey on the very immigrants we cherish in Hudson County,” DeGise said in a speech this year.

Created in 1996, the 287(g) program peaked in 2011, with 65 local police agencies actively participating. That number dropped to 46 in 2013 amid growing concerns about its operations. A 2010 report by the Department of Homeland Security inspector general called for better training of participating officers and more thorough reporting requirements to prevent racial profiling and other civil rights violations.

The Trump administration’s focus on unauthorized immigration has sparked a resurgence of interest in the program. Trump pledged to encourage more 287(g) partnerships in a Jan. 25 executive order. That was followed by a Department of Homeland Security memo pledging to “engage immediately with all willing and qualified law enforcement jurisdictions.”

Forty-one agencies have now entered into the agreements, including 11 since the presidential election.

In Frederick, the Sheriff’s Office has identified 1,444 prisoners for possible deportation since it entered into a 287(g) agreement in 2008. Jenkins said that sometimes, his department identifies an unauthorized immigrant but declines to recommend deportation to ICE because the person has witnessed a crime, is pregnant, or is receiving care for a serious medical condition, among other mitigating factors. But ICE is aware of local officers’ decisions, and can choose to overrule them.

The new administration will need all the help it can get if it plans to deport a significant number of the estimated 11 million unauthorized immigrants in the country, or even the estimated 820,000 who have been convicted of crimes.

An April report by the Homeland Security inspector general found that ICE agents are overwhelmed by their caseloads and lack clear guidelines on which arrests to prioritize.

Agencies that want to help through 287(g) apply to ICE. If they are accepted into the program, they sign an agreement, which ICE can renew annually or withdraw at any time. The agreements give local officers, after they receive federal training, the right to investigate federal immigration matters under ICE supervision during the jail intake process.

Some border-state sheriffs, such as A.J. “Andy” Louderback of Jackson County, Texas, see themselves as the first line of defense for larger cities that attract scores of immigrants. Jackson County joined the program in January, and Louderback said at least a dozen other Texas counties have plans to do the same.

“For public safety, there’s no better or more effective way of checking people who come through the jail,” Louderback said. “It doesn’t matter if they’re from Mexico or Saudi Arabia. We need to find out about that person.”

But some departments that might otherwise participate in the program have been dissuaded by the cost. Sheriff Leon Wilmot of Yuma County, Arizona, used to participate but dropped out years ago after the federal government stopped reimbursing him for staffing costs.

“I don’t have the manpower. I would not use our tax dollars to do a federal function,” Wilmot said.

Harris County, Texas, dropped out of the program this year when newly elected Sheriff Ed Gonzalez said the cost of paying deputies to do the work had reached $675,000 per year while staffing shortages elsewhere in the county jail were costing millions of dollars in overtime.

Harris County, where Houston is located, was once the biggest producer of ICE arrests under 287(g). In 2013, the last year for which ICE released statistics, Harris County identified 1,880 immigrants for possible deportation, the largest number of the 46 agencies active in the program that year. In total, agencies participating in the program identified 15,281 unauthorized immigrants in 2013 and more than three-quarters, 11,767, were deported or left the country voluntarily.

In addition to the cost, some agencies are concerned about becoming vulnerable to civil rights lawsuits, said Andy Capps, director of research for the nonpartisan Migration Policy Institute.

The American Civil Liberties Union has been fighting new 287(g) agreements, organizing protests with the help of local immigrant advocates, said Chris Rickerd, a policy attorney for the ACLU. He said the program erodes trust in local police.

“When people see a deputy in one of these programs, they no longer know whether it’s an officer there they can call for help or an immigration official there to check their status. That’s the core of the dilemma,” Rickerd said.

The ACLU has also cited potential civil rights issues in opposing 287(g) agreements, despite ICE assurances that it will not tolerate racial profiling or other civil rights abuses.

The National Sheriffs’ Association, which represents more than 3,000 elected sheriffs, doesn’t take a position on whether sheriffs should pursue the agreements.

“We don’t say it’s a good program or a bad program,” said Director Jonathan Thompson. “We do feel it can be an effective way to allow county sheriffs to cooperate fully with ICE.”