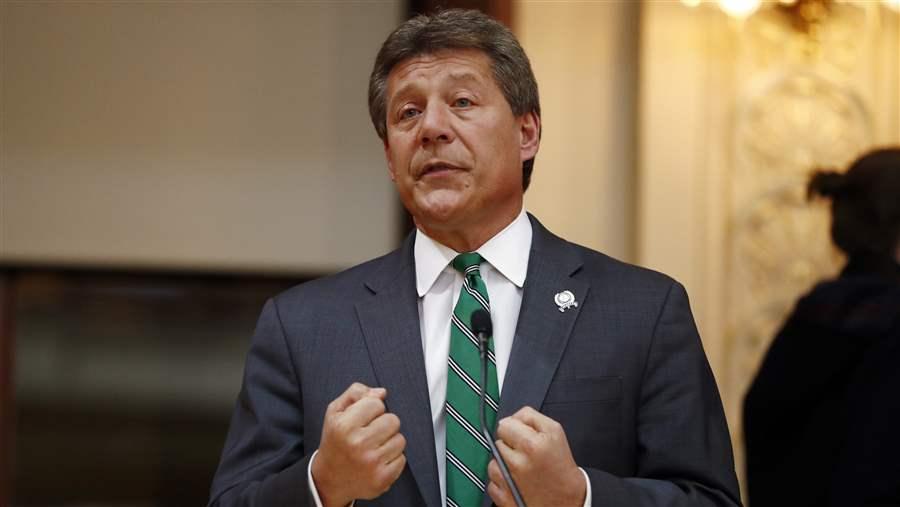 John McKeon, a Democratic New Jersey state legislator and author of a measure passed by the General Assembly this year that would bar state and local governments from entering into confidential settlements with whistleblowers.

Missouri has settled some expensive lawsuits this year. One case against the state’s Department of Labor resulted in a $1.2 million settlement; another, against the Department of Social Services, was settled for $2 million. Other state agencies, including the departments of Conservation and Public Safety, have also settled cases.

The payouts came to light early this month, when Missouri Attorney General Josh Hawley followed through on a pledge to release monthly reports detailing settlements paid by the state, as well as associated court costs and other expenses.

“Missouri citizens deserve transparent and accountable government, especially in the expenditure of their tax dollars,” Hawley, a Republican, said in a letter to the Legislature earlier this year.

Secret legal settlements and other confidential arrangements with government agencies are drawing scrutiny in other states, as well. In March, the New Jersey General Assembly passed a bill that would bar state and local governments from entering into confidential settlements with whistleblowers. In South Dakota, a bill introduced this year would have required a court order to approve secret settlements involving public entities.

And in Iowa, then-Gov. Terry Branstad, a Republican, issued an executive order in 2014 that effectively banned secret settlements between the state and public employees. He acted after dozens of settlements with confidentiality clauses cost Iowa taxpayers nearly $700,000 between 2011 and 2014.

The effort to limit secret settlements has drawn support from fiscal hawks, who say the agreements can waste taxpayer money. Transparency advocates are pushing limits on secret settlements as well, arguing that government misconduct will persist if details of settlements are kept from the public and whistleblowers are unable to speak out.

“Confidentiality clauses in agreements with the government largely serve as a mechanism to keep wrongdoing from coming to light,” said Jonathan Berns, a St. Louis attorney who represented several employees in suits against the Missouri Department of Corrections. “It significantly reduces incentive for the government to solve or correct the underlying problem.”

But critics say plaintiffs are less likely to settle lawsuits against government bodies if they don’t have a guarantee of confidentiality, and that could result in lengthy legal battles at taxpayers’ expense. Others argue that if legislation to end secrecy in government agreements is drafted too broadly, it could have unintended consequences, such as making it hard for law enforcement officials to broker deals with informants in drug cases.

In Missouri, documents related to lawsuits settled by the state government are subject to open records laws.

But House Minority Leader Gail McCann Beatty, a Democrat, proposed a measure this year that would require regular public disclosure of settlement details.

Beatty said she grew concerned about the issue when a series of articles exposed dozens of settlements with current and former employees at the Missouri Department of Corrections over workplace harassment and assault claims, which cost taxpayers $7.6 million between 2012 and 2016.

“We need to see how many settlements are happening,” she said. “And if we see trends, we need to figure out what departmental changes, what statutory changes need to happen.”

Monthly reports from the Attorney General’s Office are a start, Beatty says, but she wants to go further. Her proposal, which was passed by the Legislature as an amendment to a different bill, would require not only agencies represented by the Attorney General’s Office but also the departments of Transportation and Conservation, as well as four-year public colleges and universities, to report lawsuit settlements. The bill now awaits Republican Gov. Eric Greitens’ signature.

Next year, Beatty says she wants to push for a ban on gag orders, which keep public employees who sue the government from speaking out about their cases.

Jamison pointed to a 2015 settlement, the details of which have been kept from the public, between Sioux Falls and a group of contractors that reimbursed the city $1 million for faulty siding that was installed on a new arena.

“If the building was being constructed with taxpayer money,” Jamison said, the public “should know the details of the settlement.”

Jamison’s bill was voted down by the House Judiciary Committee in February. Opponents said it would simply add an extra legal step to an already complicated settlement process and place an additional burden on taxpayers.

Critics raised other objections, as well. Paul Bachand, executive director of the South Dakota State’s Attorneys Association, said the broad language in the bill could make it difficult for law enforcement officials to cut secret deals with informants in drug cases — a crucial tool, he said, for getting drugs off the street.

Jamison plans to try again next year. He said he will tighten the language to exclude deals between law enforcement and informants, and may propose that confidential settlements be reviewed by a body of elected officials, such as a city council, in certain circumstances.

“The way you build trust between the public and government is through transparency,” Jamison said. “I think this bill is an important opportunity to do that.”

In New Jersey, the focus of the debate over secret settlements is on whistleblower agreements.

In 2010, prosecutors in Hunterdon County believed they had a viable case against a local sheriff and two of her deputies. A grand jury found probable cause to indict the three defendants on 43 counts, including misconduct and falsification of documents.

But before the case went to trial, the indictments were dismissed by the office of the state’s newly appointed attorney general.

Bennett Barlyn, then an assistant prosecutor in Hunterdon County, said that the indictments were killed for political reasons, a charge the then-attorney general denied. Barlyn says he was terminated for speaking up about what he saw as an abuse of power.

Barlyn filed a wrongful termination suit that wound its way through the legal system for four years, costing taxpayers more than $3 million in legal fees. Under a settlement reached in late 2016, he was awarded $1.5 million, but the agreement carried strict terms of confidentiality, Barlyn said. He was unable to make public grand jury transcripts that a judge granted him access to the year before and that he said contained details proving state officials acted improperly.

“To fire a career prosecutor who spoke out against what looked like wrongdoing is absurd,” said John McKeon, a Democratic assemblyman. “I’m outraged — as any taxpayer would be — that this amount of money would be paid out and then the documents be sealed.”

McKeon authored a measure the General Assembly passed in March that would bar state and local governments from entering into confidential settlements with whistleblowers. Documents from such settlements would be accessible through public records requests, and only agreements that involved matters of national security would remain confidential.

Advocates for greater government transparency, including Gregg Leslie of the Reporters Committee for Freedom of the Press, say confidential agreements can undermine citizens’ access to important information about their government.

“Openness is just essential in these cases,” Leslie said. “Usually settlements with whistleblowers are a way to keep something quiet … but the government should be accountable for their actions.”

“When you sue an employer, they will try to dig up as much on the employee as possible, do everything they can to undermine his credibility,” Zurofsky said. That could result in the release of unflattering personal details that a whistleblower would rather keep private.

In Iowa in 2014, Senate Democrats tried to expand whistleblower protections in tandem with Branstad’s ban on secret settlements between public employees and government agencies. They have since pointed to several high-profile cases of whistleblowers enduring retaliation, arguing that increased protections might have shielded them.