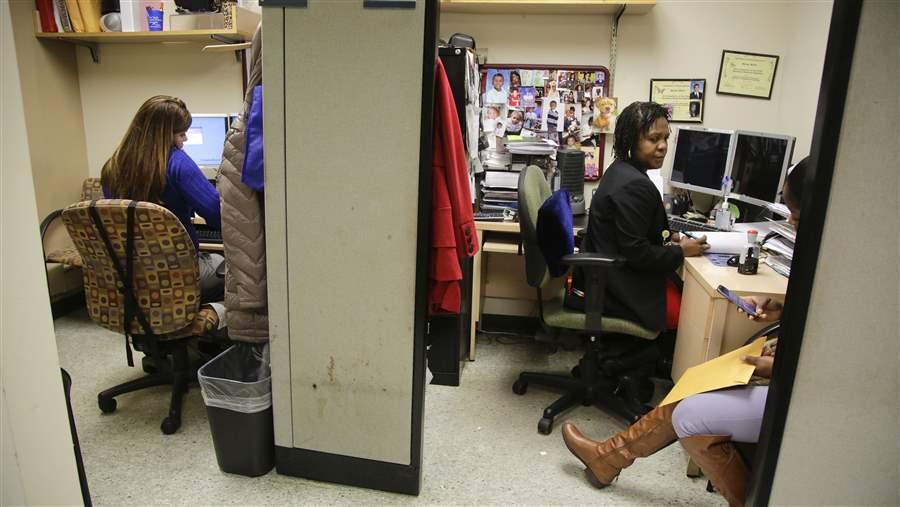 A patient applies for Medicaid at Montefiore Medical Center in New York. Several states are turning to private contractors to verify people’s eligibility for the program.

By the time Illinois decided to crack down on Medicaid fraud in 2012, state officials knew that many people enrolled in the program probably weren’t eligible. For years, caseworkers hadn’t had the time or resources to check.

To catch up, the state hired a private contractor to identify people who might not be eligible for the low-income health program and to make recommendations for whose benefits should be canceled. Within about a year, Illinois had canceled benefits for nearly 150,000 people whose eligibility could not be verified — and saved an estimated $70 million.

Now, faced with growing Medicaid enrollment and tight budgets, Republican lawmakers in several other states are taking similar steps to ensure that people receiving welfare benefits are eligible for them. Under their proposals, which are modeled on legislation drafted by a national conservative group, recipients would face tougher and more frequent eligibility checks. And the checks could be conducted by private contractors who are motivated to justify their hiring by knocking as many people as possible off the rolls.

Mississippi enacted a law in April that will require the state to hire a private contractor to create a new computer system to review and more frequently check the eligibility of people participating in Medicaid and the federal food stamps program, formally called the Supplemental Nutrition Assistance Program. Similar bills are being considered in Oklahoma and Ohio, and Missouri and Wyoming enacted similar laws last year.

Supporters say the measures will root out fraud in the welfare system. Fraud, overpayments and underpayments in all assistance programs cost federal and state governments about $136.7 billion in 2015, out of about $2.8 trillion spent in assistance overall.

In Mississippi, people “are intentionally scamming the system,” said state Sen. Josh Harkins, a Republican who supported the new law there. “This is to make sure we aren’t just carelessly spending state tax dollars.”

But Democratic policy analysts and advocates for people on welfare say that while it’s important to try to reduce fraud, the proposals go about it the wrong way. Roy Mitchell, executive director of the Mississippi Health Advocacy Program, says the bills are meant to sweep even eligible families off the system. “You basically put a bounty on Medicaid recipients,” Mitchell said.

The most concerning part of the new Mississippi law and the other proposals, Mitchell and others say, is that they give people who receive benefits as little as 10 days to respond when they are asked for more information to prove their eligibility. If they don’t respond or can’t provide the information, their benefits are canceled.

Welfare recipients move often, and many will miss the request, Mitchell said. People will be forced off the system, he said, just to re-enroll shortly after — a phenomenon referred to as “churn.”

In Illinois, the state saw savings when it first stepped up eligibility checks. But about 20 percent of those who were kicked off the rolls re-enrolled a short time later, according to state data. Most simply fail at first to respond to the state’s request for information.

The recent proposals follow model legislation drafted by the Foundation for Government Accountability, a Florida-based nonprofit that favors free-market principles. The point, said Jonathan Ingram, the foundation’s vice president of research, is to preserve finite government resources by ensuring that only eligible people are receiving benefits.

Many states, such as Oregon, are facing a backlog in verifying the eligibility of people enrolled in welfare programs. In a survey last year, officials from six states told the Kaiser Family Foundation that they were facing delays in confirming eligibility for Medicaid recipients, due mostly to challenges with their computer system or staff capacity.

Federal law generally requires eligibility checks once a year for Medicaid recipients and every six months for SNAP recipients, although that varies based on age, disability status and other factors. Eligibility requirements vary by program, but, generally, recipients must prove they make under a certain amount of money, are U.S. citizens and are residents of the state.

To verify citizenship and income, states use information from federal agencies, such as the Social Security Administration. About half of states also use a service provided by Equifax, a consumer credit reporting agency, to get more up-to-date information about wages when verifying Medicaid eligibility.

Many states rely on what recipients tell them about where they live and how many people they live with, which helps determine whether their household is eligible. Some state agencies cross-check the information applicants provide with other state agencies, inside or outside of their state.

The model legislation would require recipients to prove their identity. It would allow states to hire a contractor to collect personal information about welfare recipients, and would require the state to check any information that might indicate a change in eligibility at least quarterly. (The Mississippi law requires the state to hire a private contractor.) The state would also be required to explore joining a multi-state cooperative to identify individuals enrolled in other states.

Under the model, the state, not the contractor, would make the final decision about whether someone continues to receive benefits. And the amount the state saves by removing people from the rolls must exceed that spent to pay the contractors — a provision that could mean outside firms lose their state contract if they don’t flag enough ineligible recipients.

Mitchell said the bills are wrongly targeted at welfare recipients when they should be targeted at health care providers, such as doctors and pharmacists, who often commit fraud.

In general, states are already doing most of what is outlined in the bills, said Stacy Dean, vice president for food assistance policy at the Center on Budget and Policy Priorities. But, in instances where they aren’t, Dean and others say that hiring staff or updating computer systems would help, more than hiring an outside firm.

The bills are predicated, she said, on “the false narrative that SNAP and Medicaid are in crisis, that state administrators are bad at their job, and that low-income people are committing fraud.”

When states do start to check with more frequency, it increases the amount of churn, Dean said, and that can be costly to states. One national study found that administering agencies spend between $400 and $600 per person who is removed from the rolls and then re-enrolled.

States that look more closely to ensure that people receiving benefits are eligible often find erroneous payments, as Minnesota did.

On average, about 4.8 percent of assistance payments by federal and state government agencies were made in error in 2015, according to a 2016 GAO report. The error rate for SNAP was estimated at about 3.7 percent and for Medicaid at about 9.8 percent.

States are particularly concerned with erroneous Medicaid payments because the program is expensive, at nearly $300 billion in 2015, and because states pay for part of it — about 37 percent in 2016. The federal government pays for SNAP.

The Foundation for Government Accountability says that by passing its model bill, states will save millions by canceling benefits for those who are dead, who don’t qualify, or who are committing fraud. If every state adopted the practices it advocates, the total savings could be up to $8 billion annually, the group said in a press release.

While Illinois did see savings in at least the first year of its new system, that was mostly because the state was catching up, said Anne Irving, director of public policy for AFSCME Council 31, the union that represents the state’s workers. The union estimated that having state employees do the work, rather than hiring a private contractor, would have saved the state an additional $18 million a year.

Faced with a grievance from the union related to its collective bargaining agreement, the state in 2013 reduced the amount of work it was paying the contractor to do. The contractor still flags discrepancies in the system, but it no longer makes recommendations on what the state should do about them.

In Mississippi, Equifax, the company that many states already contract with for up-to-date information, lobbied for the new law. The company wanted to educate lawmakers about the tools available in the private sector that can help them better determine eligibility, said Robert Purser of Equifax.

Under the new law, the state will now issue a request for proposals for a third-party company, and Purser said Equifax may apply. “The legislation is a step in the right direction,” he said. “It gives states the tools they need to determine eligibility.”

But it’s unclear what exactly will change under Mississippi’s new law. The law is not specific, and state officials say it’s too soon to tell how often eligibility checks will happen or whether the state will collect more information about recipients.