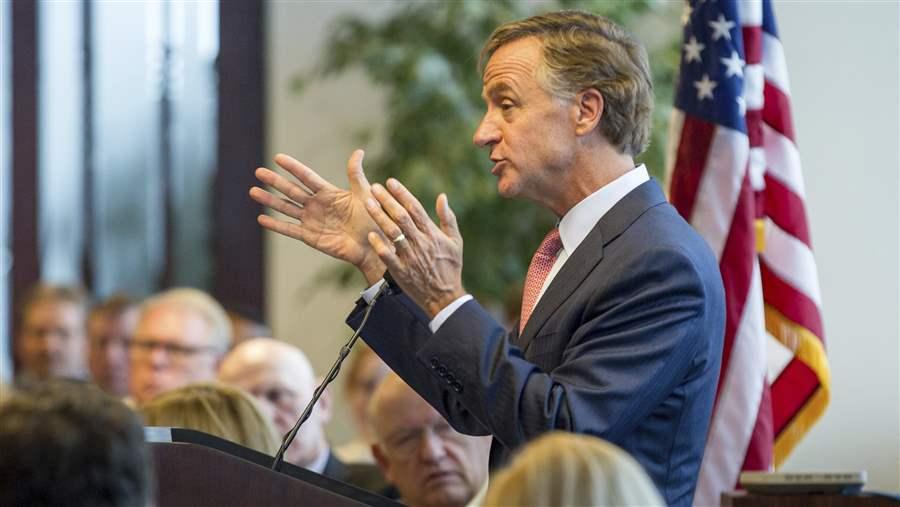 Imagine having $26 billion dangling just in front of you, only to have it repeatedly jerked away. That’s the situation facing the 45 states that have a sales tax, as people do more of their shopping from the comfort of their couches, rather than in retail stores.

The $26 billion is what states estimate they could collect in sales taxes on products sold remotely — online and via mail order. But because taxes are not collected on most remote sales — with the exception of most Amazon sales — states aren’t capturing those potential billions in revenue.

“Obviously e-commerce is becoming more important every day,” said Andy Gerlach, secretary of revenue in South Dakota, which set the pace in 2016 in attempting to capture sales tax from remote retailing. “You see the stores that have closed or downsized — J.C. Penney and a lot of others in this area. If you can’t tax e-commerce, it’s going to continue to erode the taxes your state is going to take in. We need a tax policy that keeps up with that.”

Taxing online sales is just one of the ways states are trying to keep up with the modern economy by reforming their tax codes, which have not been overhauled in decades.

Bills to tax remote sales were filed in at least 30 states this year, according to the National Conference of State Legislatures. “It’s been hotly discussed,” said Max Behlke, director of state budget and tax policy at NCSL. With many states facing budget deficits, “they are looking either to continue to cut programs, raise revenue somewhere else, which is always unpopular, or shore up revenue they should be collecting” like remote sales taxes, he said.

In 2017, six states have enacted laws or set tax rules that address the lack of tax on remote sales — Alabama, Indiana, North Dakota, Virginia, Tennessee and Wyoming. All but Virginia have Republican governors and majority GOP legislatures, which are not generally in favor of tax increases. But Main Street concerns about the tough competition from out-of-state sellers seem to have held sway.

While states are moving ahead with their efforts, two large roadblocks stand in their way — the courts and Congress.

The 2016 South Dakota law requires remote retailers to collect and remit sales tax in the state if they have more than 200 transactions or $100,000 in sales in the state. The state sued Wayfair Inc., Overstock.com Inc. and Newegg Inc. to try to force them to comply with the law and the case has now been appealed to the state’s highest court, with an appeal to the U.S. Supreme Court likely no matter which side loses in state court.

The nation’s highest court set the stage for the decadeslong saga over states collecting sales taxes from remote sellers in 1992, when it ruled that Quill Corp., a Delaware floppy disk seller, did not have to pay state sales tax in North Dakota because it did not have a physical location, or “nexus,” in North Dakota.

State legislators and others who want to change the nexus laws argue that the ruling in Quill Corp. v. North Dakota has far outlasted the era of the floppy disk and is ripe for change. In 2015, Supreme Court Associate Justice Anthony Kennedy appeared to agree when he said the Quill decision should be revisited. “Quill now harms states to a degree far greater than could have been anticipated earlier,” he wrote in a concurring opinion to a ruling that allowed a sales tax case from Colorado to go forward.

The 2010 Colorado law at issue in that case, which was upheld by the high court last year, does not require remote retailers with sales of more than $100,000 in the state to act as the tax man. Instead, it gives them a choice: collect the tax or notify purchasers one by one how much they owe.

That’s the dirty little secret of the sales tax in virtually all of the states that have one: Purchasers are required to pay the tax, even if sellers don’t collect it right away. But practically speaking, few consumers fork over the cash voluntarily on their annual tax returns if the tax is not paid at the time of purchase.

Alabama enacted a voluntary remote collection of sales tax law a couple of years ago. As a result, sellers collected and sent the state $15 million from October 2016, to January 2017, helped in part by Amazon’s decision to participate. This year, lawmakers put some teeth into it with a law that requires remote sellers that don’t collect the sales tax to notify customers and penalizes noncompliance. Officials say the state’s 8 percent sales tax on remote purchases could capture $40 million for the fiscal year that ends in September.

To entice online sellers to sign up, Alabama offers a simplified procedure that eliminates some of the paperwork that had been required to sort out varying city and county taxes in favor of a flat rate of 8 percent. Former Gov. Robert Bentley, a Republican, said the online sales tax is one reason the state’s budget picture has improved recently.

The Tennessee Department of Revenue approved a rule earlier this year that requires out-of-state retailers with more than $500,000 in sales to Tennessee customers to begin collecting sales tax by July 1.

But the Tennessee Legislature has put a hold on collections, and the rule is also being challenged in court. Kelly Cortesi, spokeswoman for the department, said that in the meantime, “the tax remains due from the customer, and businesses can still choose to voluntarily collect it and remit to the Department of Revenue.”

Indiana’s law, enacted this year, mirrors the other state laws, requiring remote sellers that don’t have a physical presence in the state to collect sales tax if their sales are over $100,000 annually or they have more than 200 transactions. North Dakota passed a similar law, but made it contingent on the U.S. Supreme Court overturning Quill.

And Virginia enacted a law in February that requires any out-of-state seller that stores inventory in the state to pay sales tax.

There is action at the federal level, too. The Quill decision was based on the Commerce Clause of the U.S. Constitution, which gives the federal government the power to regulate interstate commerce.

In April, a bipartisan group of U.S. senators introduced the “Marketplace Fairness Act,” which would require remote sellers to collect sales tax for states that have the levy. It was the latest in a series of similar bills introduced over the past few years, none of which has been enacted.

U.S. Sen. Mike Enzi, a Republican from Wyoming, one of the states that passed a remote sellers law this year, said the federal bill is “about supporting jobs and services we have in our towns while ensuring states have the ability to collect taxes they are owed, if they choose to.”

“Right now, thousands of local brick and mortar businesses are forced to do business at a competitive disadvantage because they have to collect sales and use taxes and remote sellers do not,” Enzi said.

But opponents, including eBay, smaller online sellers and anti-tax groups such as the National Taxpayers Union, argue that collecting sales taxes on their transactions is too burdensome and would hurt their businesses.

Republican Gov. Matt Mead of Wyoming signed a bill in March, modeled after South Dakota’s, that requires vendors with more than $100,000 in annual sales or 200 transactions a year, to collect the state’s 4 percent sales tax. The state Revenue Department is notifying remote retailers who qualify about the action, which will take effect July 1 unless the state is sued.

Wyoming state Sen. Cale Case, a Republican and a senior member of the Senate Revenue Committee who says he’s not “much of a tax guy,” said he supported the legislation because it’s “an issue of fairness. More stuff comes to town in brown trucks,” he said. “Main Street folks are pretty stressed about it.” He said small towns and cities in his state support extending the collection of sales tax to remote sellers because while the state gets the tax payments from retailers, much of it is returned to local governments.

Wyoming has estimated it is missing out on at least $28 million annually in uncollected remote sales tax. But Kim Lovett, an official in the state’s Revenue Department, said Amazon’s voluntary sales tax collections, which began in March, have vastly exceeded estimates, leading her to believe the $28 million number is low.

Dan Noble, director of the Wyoming Department of Revenue, said there has been a threat of legal action against the law, but it has not happened yet.

“We’ve known for years that electronic commerce is becoming a larger and larger part of the economy in Wyoming,” he said. “If states can’t capture that tax, it will erode our tax base at some point.”