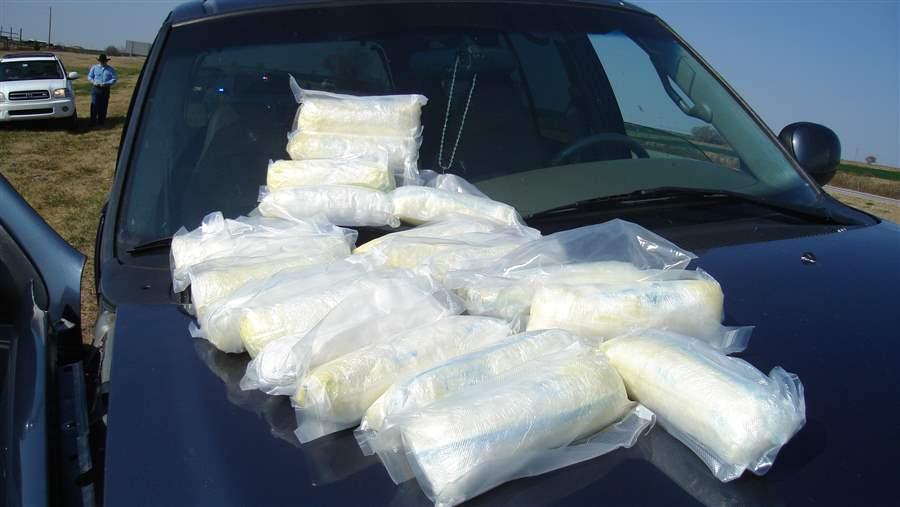 An Oklahoma narcotics agent displays 20 pounds of Mexican crystal meth seized from a drug dealer. As federal, state and local health officials focus on the opioid epidemic, the supply and use of methamphetamine is surging in Oklahoma and other Western, Midwestern and Southern states.

© Courtesy of the Oklahoma Bureau of Narcotics

The opioid epidemic has killed tens of thousands over the last two years and driven major reforms in state and local law enforcement and public health policies for people with addiction.

But another deadly but popular drug, methamphetamine, also has been surging in many parts of the country. And federal officials say that, based on what they learned as opioids swept the U.S., methamphetamine is likely to spread even further.

“The beginning of the opioid epidemic was 2000 and we thought it was just localized,” said Kimberly Johnson, director of the Center for Substance Abuse Treatment at the Substance Abuse and Mental Health Services Administration (SAMHSA). “Now we know that drug outbreaks aren’t likely to stay localized so we can start addressing them sooner and letting other states know of the potential for it spreading.”

From Arizona, New Mexico and Oklahoma to Montana, Wisconsin and Minnesota and all across the South, inexpensive methamphetamine is flowing in from Mexico, fueling what police and epidemiologists say is an alarming increase in the number of people using the drug, and dying from it.

The number of people using methamphetamine, also known as meth, crystal meth, crystal, crank, ice and speed, has been among the highest of any illicit substance for decades. But despite the stimulant’s harmful long-term effects on the body — including rotting teeth, heart and kidney failure, and skin lesions — its overdose potential is much lower than prescription painkillers and other opioids.

In 2014, roughly 3,700 Americans died from drug overdoses involving methamphetamine, more than double the 2010 number, according to the Centers for Disease Control and Prevention. In 2015, the most recent year for which federal data are available, nearly 4,900 meth users died of an overdose, a 30 percent jump in one year.

In Oklahoma, methamphetamine was involved in 328 overdose deaths last year, a sharp climb from 271 in 2015, and more than the combined deaths from prescription painkillers hydrocodone and oxycodone, according to Mark Woodward, a spokesman for the Oklahoma Narcotics Bureau.

In contrast to the last epidemic, which began in the 1990s, rural meth labs are now a rarity and the fires and explosions that captured headlines back then are practically nonexistent today, Woodward said. “So a lot of people thought if meth labs are down, meth use is down.”

“But so much is coming in from Mexico, and it’s just as good as the domestic cooked product,” he said. “Why risk leaving a paper trail at a pharmacy when you have a buddy coming up from El Paso tonight with a cheap supply?”

The majority of methamphetamine is now smuggled across the Southwest border, according to the Drug Enforcement Administration’s 2016 National Drug Threat Assessment Summary. Its purity is high and its street price is relatively low, much cheaper than heroin. “While the current opioid crisis has deservedly garnered significant attention, the methamphetamine threat has remained prevalent,” the report warns.

Minnesota, a hot spot during the last methamphetamine epidemic, is experiencing a surge in admissions for treatment of methamphetamine addiction, according to the state Human Services Department.

In the upper Midwest and much of the rest of the country, 2005 was the peak year for methamphetamine use. After that, federal and state laws restricting the sale of an essential ingredient in methamphetamine, the over-the-counter cold medicine pseudoephedrine, led to a sharp decrease in U.S. meth labs.

As more meth started coming in from Mexico, the number of people seeking treatment began creeping up again and began to surge in many places in 2015. Last year, nearly 11,600 meth users were admitted for treatment in Minnesota, according to state data — a significant increase over the 6,700 who sought treatment for methamphetamine addiction in 2005.

Methamphetamine is also showing up in places that never experienced an earlier epidemic.

“What we’re seeing is that the use of methamphetamines has recently moved out of trailer parks and rural areas and into inner cities,” said Ken Roy, medical director of a major treatment facility, Addiction Recovery Resources, in New Orleans. “We’re seeing a lot of heroin addicts that also use methamphetamines. It used to be the only way we got meth patients was when they came to the hospital from rural areas,” Roy said.

Opioid users experience a dreamlike state and typically nod off. But methamphetamine produces an entirely different high. Users experience a sense of elation and hypervigilance, and often become paranoid and aggressive. “They may binge on meth for days without eating or sleeping, and they often start seeing things that aren’t there,” said Carol Falkowski, an addiction expert in Minnesota.

Death from a methamphetamine overdose is also very different from an opioid death. With opioids, which affect the part of the brain that controls breathing, high enough doses can shut down respiratory functions, quickly causing death.

With methamphetamine, death is typically caused by a stroke or heart attack, and is characterized by extreme sweating as the body overheats prior to death. Because methamphetamine represents a lower risk of overdose, many use it for decades, which often results in gradual organ failure and death. Those deaths are typically not counted in the overdose statistics.

Likewise, treatment for addiction to methamphetamine is different than for opioids. No FDA-approved medications exist to stop the cravings for methamphetamine, whereas three effective drugs are available to help people recover from opioid addiction.

As a result, methamphetamine treatment primarily consists of outpatient therapy, often after a brief stay in a residential facility. People who stop using methamphetamine do not suffer the severe withdrawal symptoms such as the vomiting, muscle pain and other flu-like symptoms suffered by opioid users. But they do tend to become immobilized, sleeping a lot and binge eating, as well as suffering from severe depression, anxiety and drug cravings.

Falkowski said that during the last methamphetamine epidemic, there was more emphasis on the way people behaved when using meth for long periods of time, and the threat they posed to public safety.

Health officials in places like Minnesota and Oklahoma say the health care providers who helped legions of people overcome methamphetamine addiction during the last epidemic are prepared for a new onslaught. But Johnson, the SAMHSA director, cautioned that the addiction treatment workforce has not grown in proportion to the growth in overall drug use since then.

Tackling a new meth addiction wave on top of an opioid epidemic could strain the nation’s health care system, she said. “I don’t think what we’ve done to scale up access to treatment for opioid disorders is going to be that helpful for methamphetamines.”