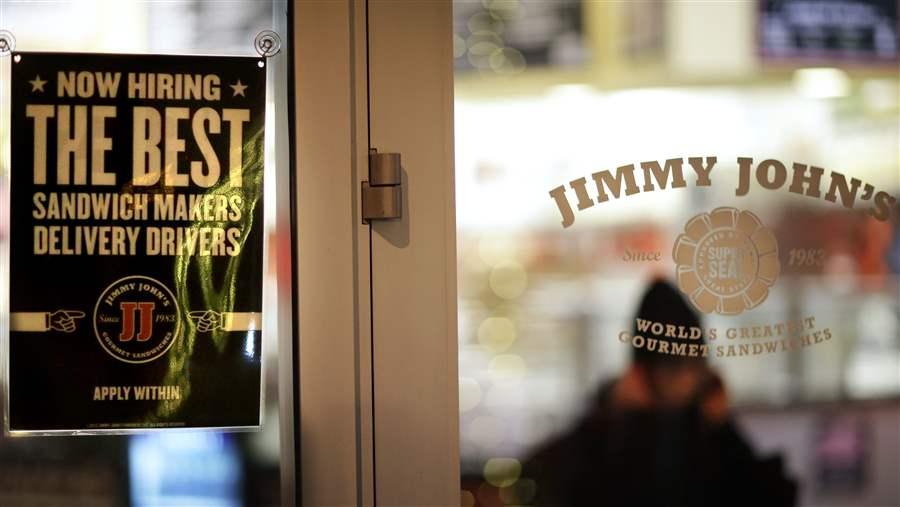 A sign advertising hiring opportunities at a Jimmy John’s sandwich shop. Jimmy John’s agreed to stop asking low-wage workers to sign noncompete agreements in settlements with the attorneys general of New York and Illinois last year. States are considering changes that would curb the use of such agreements.

When Krishna Regmi started work as a personal care aide for a Pittsburgh home health agency in 2015, he was given a stack of paperwork to sign. “They just told us, ‘It’s just a formality, sign here, here, here,’ ” he said.

Regmi didn’t think much of it. That is, until he quit his job nine months later and announced his decision to move to a rival agency — and his ex-employer sued him for violating a noncompete clause Regmi says he didn’t know he had signed. The agreement barred Regmi from working as a personal care aide at another home health agency for two years.

Big companies often ask top executives who have access to confidential business information to sign noncompete agreements. But low-wage, unskilled laborers such as janitors, landscapers and entry-level health workers are often asked to sign them, too.

Employers say the agreements help them retain their workers in a tight labor market and protect their business interests — from secret formulas to client lists. And, they say, workers who sign them sometimes get additional training or higher pay in return, because their employer knows they won’t leave for a competitor.

But advocates for workers say it’s ridiculous to ask employees who don’t have specialized skills or secret knowledge to give up their freedom to work for a rival company. They say noncompete agreements reduce social mobility and clog up the labor market by preventing businesses from hiring the workers they want and preventing workers from taking the jobs they want. And for many workers, just being threatened with legal action is enough to make them back away from their career and look for different jobs instead.

Requiring low-wage workers to sign the agreement is “really abusive, and I think interferes with people’s ability to earn a living,” said Maryland state Del. Alfred Carr, a Democrat.

This year, legislation has been introduced in at least six states that would tighten the legal standards the agreements have to meet in order to be enforced, or make certain types of them illegal outright. Four states passed laws on the issue last year, including Illinois, which prohibited noncompete agreements for employees who earn $13 an hour or less.

Bills in Maine, Maryland and Massachusetts would restrict noncompete agreements that involve low-wage employees; New York Attorney General Eric Schneiderman, a Democrat, is pushing for the same change in his state. Proposals in Massachusetts and Washington would also restrict the agreements for other types of workers, such as temporary employees and independent contractors.

Such bills face an uphill struggle, however, often because of stiff opposition from business. “Non-compete agreements are essential to the growth and viability of businesses by protecting trade secrets and promoting business development,” the Maryland Chamber of Commerce said in written testimony opposing a bill Carr introduced that would have voided agreements signed by workers who earn less than $15 an hour. The bill passed the House in February but died in the Senate.

Federal surveys don’t track how many U.S. workers have signed a noncompete agreement. The best estimate comes from a 2014 online survey of over 11,000 people analyzed by researchers Evan Starr of the University of Maryland and J.J. Prescott and Norman Bishara of the University of Michigan.

They calculate that about 38 percent of U.S. workers have signed a noncompete agreement at some point in their careers and 18 percent of workers are currently bound by one. High earners are more likely to sign such agreements, but about a third of workers earning under $40,000 have done so. 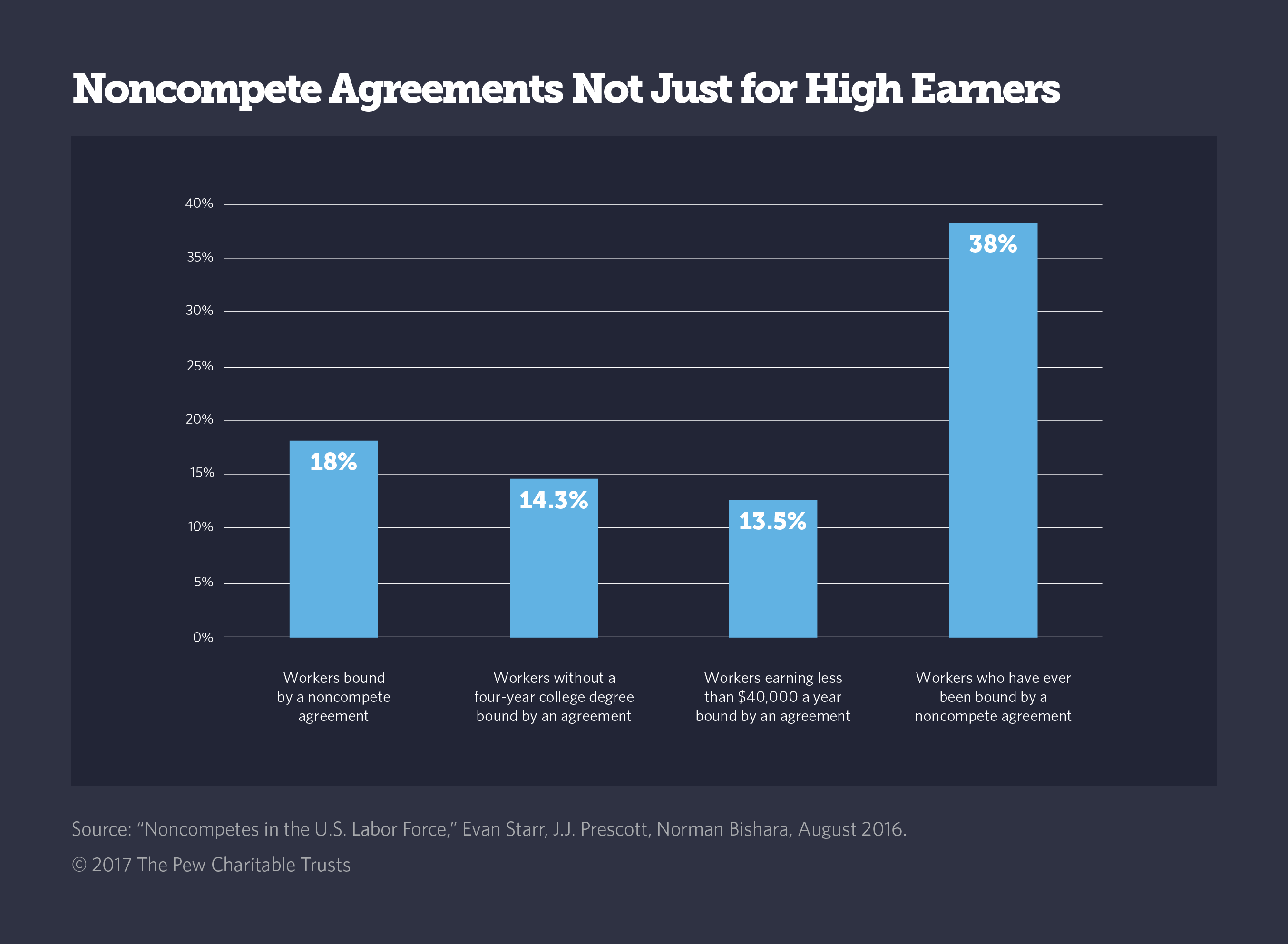 In theory, both employers and employees can benefit from noncompete agreements. But in practice, advocates for workers say the agreements often favor employers. And both parties can be confused about what courts will enforce.

Many workers sign noncompete agreements after they have accepted a job, when they have less power to negotiate. In the survey study, respondents who signed an agreement after accepting a job or when they didn’t have other offers were less likely to say they received something in return, such as better working conditions or additional training, Starr said.

Other survey respondents weren’t sure if they signed one at all. “People who have high education levels, who are making lots of money — they’re pretty confident about whether they signed or not,” Starr said. “But people who are relatively low-skilled, people with, let’s say, a high school degree or less, or people who earn less than $40,000 — they’re very unsure.”

Brendan Lynch, an attorney for Community Legal Services of Philadelphia, says his low-income clients usually have no idea that they agreed to a noncompete clause. They find out after they’ve left a company, when their ex-employer slaps them with a court order or sends a threatening message to a prospective future employer.

Lynch represented a clerk at a home care agency, for instance, who signed a five-page employment contract that, according to court records, prohibited her from serving any of the agency’s clients within a 35-mile radius for five years. It also required her to pay the company’s legal fees if they ever went to court.

Lynch says the noncompete agreements he sees are often written too broadly and wouldn’t survive a lawsuit. But most workers obey initial threats rather than going to court over them, he said. “I think there are people who have been affected by this, and it doesn’t even occur to them to get a lawyer,” Lynch said.

Regmi did get a lawyer, along with 14 other Bhutanese refugees who worked as personal care aides for the same employer and also wanted to leave. They had all been placed there by a refugee resettlement agency, and they were all paid to work for their own family members — an arrangement that is permitted under Pennsylvania’s Medicaid program.

A threatening letter from Friends of Farmworkers, a Pennsylvania legal aid organization, was enough to scare Regmi’s ex-employer into dropping the lawsuit. He now works for the rival agency and still looks after his mother, in addition to caring for another client part time.

In recent years, the New York attorney general’s office has reached settlements with three companies over their use of noncompete agreements, including Jimmy John’s, a national fast food chain. Some Jimmy John’s franchises in New York had forbidden employees from working for other sandwich shops in a 3-mile radius for two years after leaving the company. Under the terms of the settlement, the company agreed to stop giving franchisees sample noncompete agreements and to tell franchisees to void existing agreements. Illinois also reached a settlement with Jimmy John’s last year.

“In general, employers may have a broader conception of what are trade secrets, or what is confidential information, than really is supported by the law,” said Terri Gerstein, former labor bureau chief for the New York attorney general’s office. That means companies sometimes seek to use the agreements in situations in which they aren’t lawful.

When a home care agency asks a low-wage worker to sign a noncompete, it’s usually because it doesn’t want to lose him, says William Dombi, director of the Center for Health Care Law, a public interest law firm established by the National Association for Home Care and Hospice, an industry group. “Those workers are very hard to come by,” he said.

But that strategy only works, Dombi said, if workers know they’re signing a contract that will limit their ability to find another job in the same field. “The strength is in the deterrence, rather than the enforcement.”

No federal law governs noncompete agreements. It’s up to states to decide whether to allow them and how to enforce them.

In California, North Dakota and Oklahoma, the law says the agreements are unenforceable; judges will just throw them out. In other states, statutes and case law create a set of tests that the agreements must pass. In Oregon, for instance, they can only be enforced if workers have two weeks to consider them before taking a job, or if the worker gets a “bona fide advancement” in return, such as a raise.

States have tightened up enforcement criteria in recent years, propelled by news reports, Starr’s research and encouragement from the Obama White House. In addition to Illinois’ law banning noncompete agreements for low-wage workers, last year Utah passed a law that voided agreements that restricted workers for more than a year; Rhode Island invalidated them for physicians; and Connecticut limited how long and in what geographic area physicians can be bound.

Starr said that lawmakers who want to discourage the use of noncompete agreements may want to consider making certain kinds of contracts outright illegal and creating a penalty for companies that make workers sign them. “For the average worker, having the contract is what drives most of the behavior,” he said.

Some bills would move in that direction. In New York, Schneiderman plans to introduce a bill that would ban noncompete agreements for workers earning under $900 a week, require employers to show them to employees before offering them a job, restrict how long they can limit a worker’s activity, and require employers to give higher pay to employees bound by the agreements.

In Massachusetts, a bill would make a number of changes. For instance, it would bar the agreements from restraining employees for more than a year in most cases and would restrict the geographic area an employee can be blocked from working in. The bill would also make unenforceable agreements that involve certain groups of workers, including teenagers, college students and volunteers.

The Massachusetts bill has evolved significantly since state Sen. William Brownsberger, a Democrat, first proposed making all noncompete agreements void and unenforceable in 2009. It’s getting close to legislation lawmakers and the business community can support, he said.

For employers in the state, voiding the agreements for teenagers, seasonal employees, and other workers who may be working low-wage jobs wasn’t that controversial, said James Rooney, president and CEO of the Greater Boston Chamber of Commerce. “That was in the low-hanging-fruit category,” he said. But business groups in the state want to preserve their ability to ask other employees to sign them.

In Maryland, business groups balked at the $15-an-hour income cutoff that Carr and other lawmakers proposed. “Internal dissemination of proprietary and confidential information is not limited by income,” said Larry Richardson, vice president of government affairs at the Maryland Chamber of Commerce.

Besides, in Maryland, case law already puts safeguards in place to protect employees, he said. Those two factors, Richardson said, “made the bill not only unnecessary but dangerous to business.”