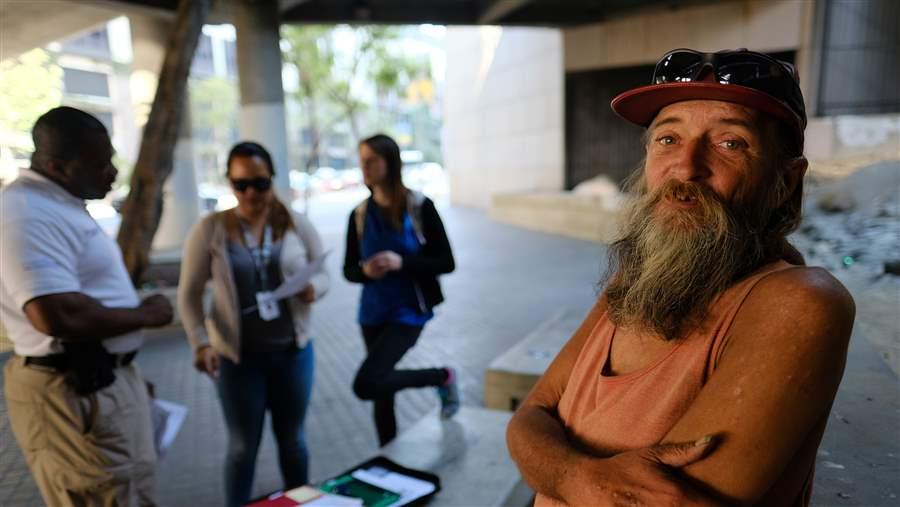 David Brophy, right, talks to representatives of a Los Angeles group who are helping him acquire an ID card on a city street near where he lives. Homeless people often face considerable barriers to obtaining ID. A few cities and states are trying to make it easier for them to do so.

Nearly three years ago, when his fiancee died, Robert Giddings was abruptly evicted from their Flint, Michigan, home. His name wasn’t on the lease, so he had no recourse — and his landlord threw out all his things, including his ID.

Terrified, he stumbled through the wintry streets for a day, until police picked him up for public intoxication. Giddings says he wasn’t drunk, but blind from untreated cataracts.

Giddings was placed in a shelter, but without ID, he couldn’t get the medical care he needed — or even gain entrance to government buildings so he could apply for a replacement ID.

“It was pretty hard,” Giddings, now 58, said. “You can’t go to the doctor. I couldn’t cash any checks. I couldn’t apply for food stamps.”

As Giddings learned, not having ID can make it virtually impossible to escape homelessness. It means being shut out of federal, state and county buildings, where social services agencies that help the homeless are often located. It makes it much harder to get a job, find a place to live, open a bank account, get food stamps and disability benefits — or in some instances, even stay at a homeless shelter. In some states, no ID means not being able to vote. And federal regulations enacted after Sept. 11, 2001, are making it even harder to get ID.

A handful of cities and states are trying to combat this. In January, New Jersey began waiving fees to replace birth certificates, and in July it will allow the homeless to get a state ID card for free. California, Connecticut, Georgia, Illinois, Michigan, Nevada, North Carolina and South Carolina already waive fees for the homeless to obtain IDs.

And this year, lawmakers in Hawaii, Massachusetts, Texas and West Virginia have introduced legislation that would make it easier for homeless individuals to obtain identification, such as eliminating some of the required paperwork.

Later this year, Chicago will roll out a pilot ID program targeted at helping homeless people and undocumented immigrants. Detroit introduced a similar program last year; Newark, New York City, Oakland and San Francisco also offer municipal IDs designed to help people who don’t have the documents required to get a state ID. Such municipal IDs are open to all, but many recent programs came about as cities sought to help undocumented immigrants.

Meanwhile, in Genesee County, Michigan, where Giddings lives, a task force was created this year to streamline the ID process for the homeless population. Three other counties in the state have similar task forces.

“When you’re experiencing homelessness, you get used to being invisible. And now you don’t even have a piece of ID that says who you are,” said Brent Downs, a formerly homeless man who now serves on the board of directors of the Phoenix-based Homeless ID Project, a nonprofit that helps the homeless in the city get identification.

To Get ID, You Need ID

To get an ID card, most states require multiple proofs of identity or permanent residence, such as utility bills, Social Security cards or birth certificates. Some states require proof of homelessness, such as a letter from a social services agency.

And most states charge a fee to get an identification card — not to mention fees of as much as $50 for a copy of a birth certificate. But even with waived fees, getting an ID can be an arduous process entailing multiple visits to a state office.

“The problem is [homeless people] were being turned around so many times,” said Debra Hayes, executive director of My Brother’s Keeper of Genesee County Inc., the homeless men’s shelter where Giddings now lives. “They need this document or that document, and they give up. That’s what we don’t want to have happen. When they give up on having an ID, they give up on the resources available to them.”

Eric Tars, senior attorney for center, said states should stop charging for ID cards for everyone. Even in states that waive fees for the homeless, he said, state workers often don’t know about the waiver or the waiver requires proof, forcing homeless people to go through an extra step. States and counties also should provide replacement birth certificates and other documentation for free and make it generally easier for people to verify their identity, he said.

“That way you don’t create a circular feedback of ‘You need the ID to get the ID,’ ” Tars said.

Last month, the Chicago City Council voted to create a municipal ID program for the undocumented and the homeless. The city has earmarked $1 million from the 2017 budget to get the program going.

The city ID cards, promoted by Mayor Rahm Emanuel, a Democrat, will grant people access to city services and cultural institutions. Cardholders will also be able to load the card with fare for public transit, said City Clerk Anna Valencia.

Chicago’s program is modeled after New York’s idNYC program, which launched this year and lets people use expired state IDs, high school transcripts, and letters from a homeless shelter to verify their identity.

Valencia said she met with a young homeless woman who described the hurdles she faced to get state ID, to access a local food pantry and qualify for the federal nutrition program, WIC, so she could feed her baby. After returning to the DMV multiple times, she was finally able to get ID with the help of a local nonprofit.

The city’s legal team is still working out what documentation will be required for the chronically homeless to obtain IDs, because most of them don’t have access to even the most basic records, Valencia said.

One option city officials are exploring is creating a mobile service that goes to homeless shelters and agencies so people can get an ID card the same day, without having to wait in line at the DMV.

“This will really help people access services right away until they are back on their feet,” Valencia said.

But getting an ID card is becoming more difficult, as states move to meet more stringent document requirements that are part of the federal Real ID program. The idea was to make it tougher for would-be terrorists to get a driver’s license.

So far, 25 states and Washington, D.C., have begun using Real ID driver’s licenses. Under the law, to get a state-issued driver’s license or identification card, applicants have to provide photo ID, proof of their Social Security number and date of birth, and proof of a permanent residence.

For each of those categories, only certain documents are acceptable, such as a lease, a W-2 form or a paystub. For low-income or homeless people who’ve lost their identifying documents, such requirements create an insurmountable barrier, said Danielle Moise, a staff attorney with Bread for the City, a D.C.-based nonprofit that is working to help the homeless get ID.

“It’s making it much more difficult for people to get an ID in the city, even if they’ve lived here all their lives,” Moise said.

If someone had an ID but lost it, it can be relatively simple to get a replacement. But sometimes, helping the homeless obtain ID requires a sleuthing expedition.

The chronically homeless often have trouble remembering when or where they were born, said Downs of the Homeless ID Project. And in some states, to get a copy of a birth certificate, you need to know your parents’ birthplace, too, he said. (Most states allow you to apply for a duplicate by mail.)

“You’re trying to walk them back through their life,” Downs said.

At his shelter, My Brother’s Keeper, which is not affiliated with President Obama’s initiative of the same name, Giddings worked closely with Debra Hayes, his caseworker, who helped him track down the needed paperwork: his birth certificate in Norfolk, Virginia, his adoption papers, everything.

“She worked her butt off trying to get me ID,” Giddings said.

It took almost a year. Finally, ID in hand, Giddings was able to sign up for Medicaid, see a doctor about his eyes and schedule some much-needed eye-surgery.

“Now I can see,” said Giddings, who is planning to move in soon with his new girlfriend.

“Identification helped me get a lot of things. I can go to any doctor. I can apply for food stamps. I can get money out of a bank.”