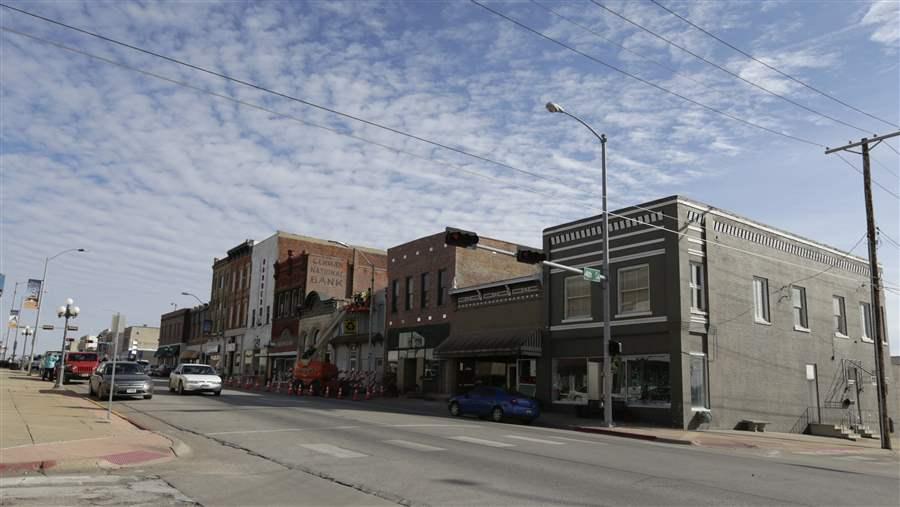 In this photo from Feb. 2, 2017, a city block is seen in downtown Beatrice, in Gage County, Neb. When six people went to prison for the 1985 rape and murder of a 68-year-old Nebraska woman, county officials figured they had put the gruesome high-profile case behind them. But after DNA evidence exonerated all six of the accused in 2008, the rural farming county just south of Lincoln found itself facing a new problem, a $28 million federal judgment that could force officials to file for bankruptcy.

A small rural county in southeast Nebraska might have to declare bankruptcy, not because of mismanagement or high labor costs but because of an unexpected legal judgment that the county government cannot pay.

Gage County on the Nebraska-Kansas border could be the next local government in the nation to file for bankruptcy protection after a federal jury awarded $28.1 million in damages plus attorneys’ fees last July to six people wrongly convicted of a brutal rape and murder.

Leaders from the farming community of about 22,000 people said they can’t afford that amount. The county’s insurance carriers have declined to cover the verdict.

“No county could prepare for that,” Myron Dorn, chairman of the county Board of Supervisors, said in an interview.

Increasing taxes to cover the judgment would be difficult, because Nebraska’s property tax cap limits the county from raising taxes by more than about $3.7 million. Residents could theoretically vote to exceed the state-imposed limit, but that is unlikely.

The county has appealed the verdict and is awaiting a decision; in the meantime, officials have hired bankruptcy attorneys to explore their options in case they lose the appeal.

While municipal bankruptcies are generally rare—only 54 counties, cities, towns, and villages nationwide have filed for bankruptcy since 1980—it’s not unusual for lawsuits to contribute to Chapter 9 filings. Of the 18 general purpose local government bankruptcies filed since 2006, legal judgments have been an important factor in five, or nearly 30 percent, according to research by The Pew Charitable Trusts. [General purpose local governments include entities such as counties, cities, towns, and villages and exclude special purpose districts such as school districts or and fire districts, which account for a much larger proportion of municipal bankruptcies. Nebraska historically has led the nation in special district bankruptcy filings.]

The legal judgments underscore the importance of local governments maintaining a healthy reserve fund balance to absorb unforeseen expenses. They also reinforce the need for states to be aware of the fiscal health of their local governments, so officials can prepare for situations when the state may need to step in to help. Washington state, for example, asks local governments about “litigation costs or pending legal judgments that risk depleting available fund reserves,” to try to anticipate and to plan for potential fiscal shocks.

Elsewhere around the country, Hillview, Kentucky, filed for Chapter 9 in August, 2015, after losing a lawsuit filed by a local truck driving school over a property dispute and being ordered to pay $15 million. The bankruptcy was dismissed in May, 2016 after city leaders agreed to raise taxes and sell bonds as part of a settlement with Truck America.

Other municipal bankruptcies that were prompted at least in part by lawsuits include:

Stephen C. Fehr is a senior officer, Adrienne Lu is a senior associate, and Matthew Cook is an associate with Pew’s state fiscal health team.