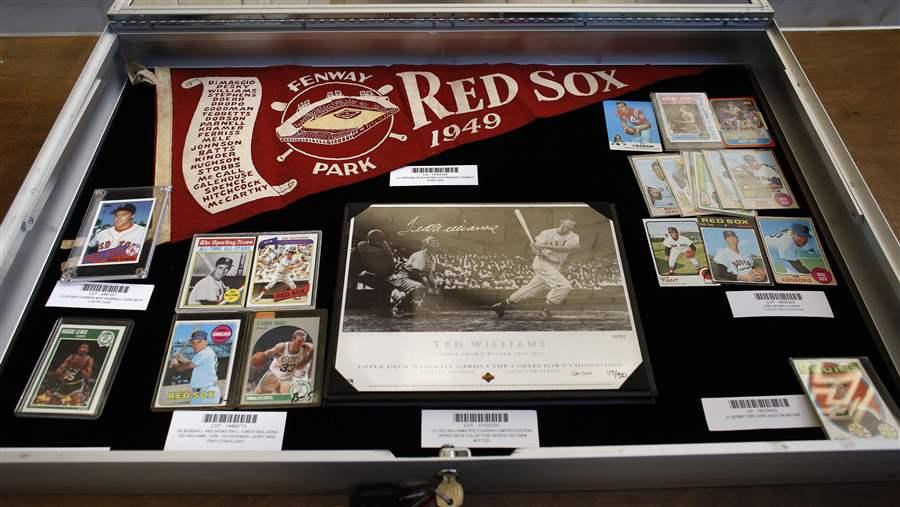 Sports memorabilia is part of an auction of abandoned safe deposit box contents conducted by the Massachusetts Treasurer’s Office in 2015. State officials say residents should contact them if they think they have abandoned property and be wary of scammers who promise to reunite them with lost property for an upfront fee.

The email or letter looks official, and it contains an attention-grabbing message: The state is holding on to your unclaimed property, which may be worth hundreds of thousands of dollars. All you have to do is pay a fee upfront or provide your personal information and the money is yours.

But the letters and emails are the work of scammers, not state officials. A growing number of people across the country are receiving these messages and some are falling for them, losing thousands of dollars or becoming victims of identity theft in the process.

“These scams are just rampant,” said David Milby, director of the National Association of Unclaimed Property Administrators (NAUPA), which represents state unclaimed property programs. “The email from the public we’ve been getting about this has increased tenfold in the past year.”

Some scammers pretend they work for NAUPA and have even used its letterhead to make their pitch.

Besides costing victims money, consumer advocates say this kind of fraud diminishes public trust in state agencies that handle unclaimed property and makes it harder for them to do their jobs.

Unclaimed property is cash or other financial assets considered lost or abandoned when an owner can’t be found after a certain period of time. It includes dormant savings accounts and CDs, life insurance payments, death benefits, uncashed utility dividends and the contents of abandoned safe deposit boxes.

There is plenty of it. In 2015, unclaimed property agencies in the U.S. collected $7.8 billion and returned $3.2 billion to rightful owners, according to NAUPA. At last count in 2013, states were holding on to $43 billion in unclaimed property.

The treasurer, comptroller or auditor of each state maintains a list of abandoned property and runs an online database that anyone can search by name for free. Forty states and the District of Columbia also provide that information to a NAUPA-endorsed national website that the public can search.

But fraudsters don’t bother reviewing or collecting that data. They simply contact people at random, using email, letters or phone calls, hoping to snare a victim.

The scams play on the idea that people are simply getting back assets they’re owed.

“There’s an air of legitimacy to them,” said John Breyault, a vice president at the National Consumers League. “People think it’s their money.”

Banks, insurance companies and other businesses are required by law to turn over assets from abandoned accounts to state unclaimed property agencies. Often, they haven’t heard from the owners or been able to get in touch with them over a period of time. Some people may have forgotten about the account, moved, changed their name or died.

The state agencies hold the funds indefinitely. The only exception is the contents of abandoned safe deposit boxes, which are often too unwieldy for states to store. Many officials use live or internet auctions to sell off the property. (Purple Hearts and other war medals are excluded.) States then add the auction proceeds to the pot of unclaimed assets, but owners who come forward at a later date can collect what they’re owed.

NAUPA’s Milby said states try hard to connect people with their lost assets. Some send staffers to special events or set up kiosks in malls; some use social media, radio and TV; some take out special section ads in newspapers listing every person who has unclaimed property.

Despite those efforts, many owners never reclaim their property. In Maine, for example, the state returned $16.1 million to people in fiscal 2016 but is still holding more than $234 million.

People who want to collect abandoned property can file a claim for free. But some legitimate businesses, called finders or locators, comb through state unclaimed property data, and track down the owners. If an owner signs a contract, the company will tell him where the property is and file a claim for him. The companies charge a fee or a percentage of the total value, which states often cap, sometimes at 10 percent.

In contrast, fraudsters reach out to people randomly, and don’t require a signed contract, as legitimate firms do. They try to get money or personal information from victims upfront and quickly, often warning that the transaction must be kept confidential.

Milby said no one keeps data on the number of complaints states get about unclaimed property scams. But he said he received hundreds of emails last year from people reporting they had been contacted by a fraudster. “You get to the point where people don’t know what’s real and what’s not real,” he said. “It’s a sorry state of affairs.”

In one scam, for example, a fictitious NAUPA regional auditor named Mrs. Alexis James or Mr. Jeff Smith emailed potential victims, informing them they had inherited a large sum from a relative. The “official” would only send more details if they provided their personal information. The idea, which is typical of phishing and other cyber scams, was to trick people and then steal their identity.

In Maine, State Treasurer Terry Hayes said her office last month received seven calls within a week from residents who had gotten email solicitations with an embedded link to a phony website. People were asked to fill in their personal information and credit card number, which would be charged up to $2,300 so they could have their unclaimed property returned.

Disturbed by the number of complaints, Hayes issued an alert, warning consumers to be wary of mailings or emails alleging that the state has their unclaimed property.

In West Virginia, State Treasurer John Perdue in March also put out a warning about an unclaimed property scam.

Breyault said his consumer group has gotten reports from victims, many of them seniors, who have lost thousands of dollars in advanced-fee frauds such as unclaimed property schemes.

“Seniors are an attractive target for scammers,” he said. “They tend to be home. They’ll answer the phone. They tend to have liquid assets. And some are isolated and eager to talk to someone.”

Kristin Keckeisen, of the AARP Fraud Watch Network, said victims often react emotionally, not logically, when scammers lure them into their web.

“With this type of scam, people think, ‘maybe I did have an insurance settlement or a bank account’. There’s an element of potential truth,” she said.

Fraud experts say that while some of the fraudsters are based in the U.S., many operate from overseas, where it’s harder for law enforcement to catch them. The scams have become increasingly sophisticated, using official-looking letters and emails with professional-sounding language that make it hard to distinguish from the real thing.

For officials in the Massachusetts Treasurer’s Office, unclaimed property fraud is personal: The office’s Boston address is being used in a nationwide scam that pilfers NAUPA’s letterhead.

The phony letter, which is posted on NAUPA’s website, says it is from an “unclaimed property adjustor” who works for the association. It uses information about unclaimed property that is cut and pasted from the organization’s website and refers to federal statutes and IRS rules.

The letter explains that the recipient is the second-place winner of a sweepstakes award worth hundreds of thousands of dollars that is now unclaimed property. To claim the money before it is liquidated and have it deposited in a U.S. bank, the person must purchase “important registration stamps” for $2,250 within three to five days.

Massachusetts Assistant Treasurer Mark Bracken said the fraudsters usually ask that a money order be sent to an address in another state. If people take the bait, the scammers contact them later and tell them the first-place winner has been disqualified and they now have won the bigger prize but must purchase more stamps. Often, he said, they ask victims to place cash in the pages of a magazine, seal it and mail it. If they comply, the scammers keep asking for more.

Bracken said the scam, which has ensnared people from across the country, initially was pitched through the mail, but then began using email and phone calls as well. He said his office is working with state and federal law enforcement agencies, who are trying to track down the fraudsters, thought to be based in the U.S.

“A lot of the people falling for it are seniors, but they’re not necessarily targeting seniors,” Bracken said. “I’ve had people in their 20s call, so the ages of people have run the board. It’s a crapshoot, but all they need to do is find one vulnerable person.”