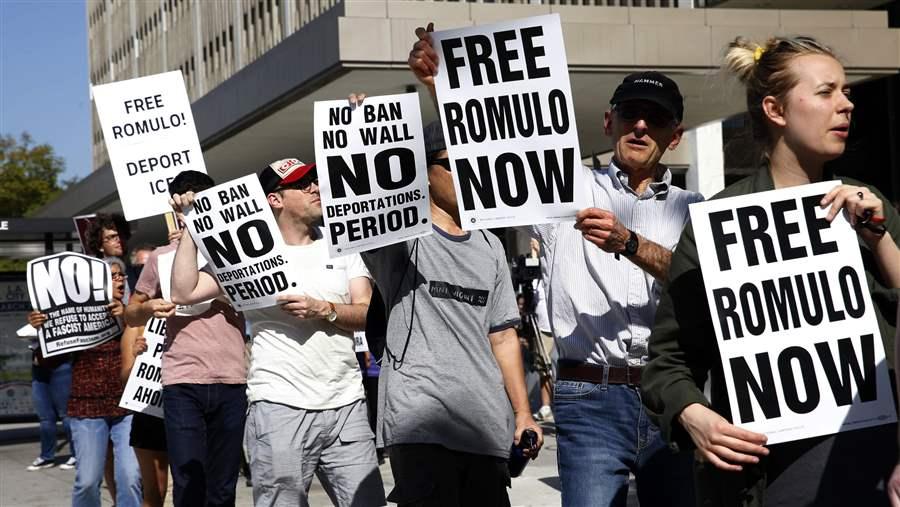 Family and supporters of Romulo Avelica-Gonzalez, an immigrant who was arrested in February after he dropped his daughter off at school, protest outside the Los Angeles offices of Immigration and Customs Enforcement. Officials in some cities and states are trying to block deportation arrests at courthouses, schools and churches.

Amid vows from the Trump administration to crack down on illegal immigration, some city and state officials are trying to calm immigrants’ fear with legislation to prohibit arrests in courthouses, schools, workplaces and other spots where immigrants gather.

The legal rationale for the proposals is not always clear. State and local governments may not have the power to keep immigration agents from arresting people in courthouses or on public streets near churches and schools, where some recent arrests have been made.

What is clear is that fear of deportation is keeping immigrants from sending children to school, showing up for medical appointments, and appearing in court as witnesses or for other reasons.

The tense situation is, at least in part, an unintended consequence of so-called sanctuary policies, under which cities and counties refuse to hold prisoners for possible deportation. In addition, some sheriffs have questioned the legality of “detainers,” or requests from the federal Immigration and Customs Enforcement (ICE) to hold prisoners.

The increased difficulty of arresting immigrants has driven ICE to make more raids in other places, including courthouses.

“Now that many law enforcement agencies no longer honor ICE detainers, these individuals, who often have significant criminal histories, are released onto the street, presenting a potential public safety threat,” said Danielle Bennett, an ICE spokeswoman.

“If they can’t get them at the jails, they have to go out into homes and public places to find these people,” said Randy Capps, a research director at the Migration Policy Institute, a nonpartisan research institution that has recently begun monitoring immigration enforcement. “These communities are under growing pressure.”

State Rep. Jean Philippe Barros, a Rhode Island Democrat, agreed. “A lot of people are uneasy here,” said Barros, who has co-sponsored a bill that would bar schools, churches, hospitals and courthouses from allowing immigration arrests. The Rhode Island House Judiciary Committee had its first hearing on the bill last week.

Similar legislation has been proposed this year in California, Illinois and Pennsylvania. One California bill would go a step further and block employers from allowing immigration agents onto work sites.

At the federal level, U.S. Rep. Suzanne Bonamici, an Oregon Democrat, has co-sponsored a bill barring immigration arrests near schools, hospitals and churches, as well as motor vehicle offices, unless terrorism or some other emergency is involved. Democrats in the Senate have proposed a similar measure.

Officials in Multnomah County, which is partly in Bonamici’s district, say they have heard complaints from schools, health care centers and courthouses that immigrants, including those with legal status, are keeping their children home from school and failing to keep appointments because of rumors that ICE agents are on the streets near schools and hospitals.

State judges in California, Oregon and Washington have also asked immigration agents to stay out of courts, saying their presence deters immigrants from conducting legitimate business.

Some states are moving in the other direction, seeking to outlaw any refusal to help federal immigration officials with deportations.

In Texas, Republican Gov. Greg Abbott signed a law last week that makes it a misdemeanor for a sheriff or police chief to refuse to help deport unauthorized immigrants. Since February, Travis County Sheriff Sally Hernandez has refused to hold prisoners on detainers — except for the most egregious crimes — in the county jail in Austin.

In Florida, a bill that passed the House last month but did not advance in the Senate threatened to withhold state funding and remove elected officials from office for not cooperating with federal deportation efforts.

‘Who’s Going to Take Care of the Kids?’

Some of the state and local measures that have been proposed would bar most immigration arrests in locally controlled schools and courts. That’s in line with an ICE policy, held over from the Obama administration, that discourages raids in what the agency calls “sensitive locations” including churches, hospitals, schools and college campuses, without a supervisor’s approval.

While there have been no recent reports of immigration agents making arrests in churches or schools, some arrests have been made nearby. In February, a man was arrested after taking his daughter to school in Los Angeles, several men were arrested after leaving a church homeless shelter in Fairfax County, Virginia, and a woman released from ICE custody for hospital treatment in Texas was put back in detention while awaiting surgery, though she was later released.

In Rhode Island, Barros said people in the small city of Central Falls have sometimes been afraid to go out when they hear that ICE agents are around — whether it’s real news or “radio pasillo,” the grapevine or rumor mill among South American immigrants in the town.

“The uneasiness comes from the idea that, what if I take my kids to school or a doctor’s appointment and I get arrested? Who’s going to take care of the kids?” Barros said.

Bennett, the ICE spokeswoman, said the agency’s policy against routine enforcement in sensitive locations remains. But, she said, ICE sometimes makes deportation arrests at courthouses, which are considered relatively safe because visitors are screened for weapons before entering.

“They’re largely symbolic. There’s nothing to prevent ICE from waiting on the courthouse steps or in public areas to arrest somebody if they want to,” Yale-Loehr said. Only federal legislation, like that proposed in the House and Senate, could regulate how ICE is allowed to operate, he said.

Capps agreed. He said ICE isn’t likely to start going into churches and schools, but agents are starting to push the envelope. “I don’t know how any state or locality can stop them from setting up on a public street outside a church or outside a school, watching people drop their kids off,” he said.

But the Center for Immigration Studies, which favors limited immigration, sees the proposals as “just another attempt to hinder immigration enforcement in any way they can,” according to Jessica Vaughan, director of policy studies.

“When the sanctuaries block ICE from making arrests in jails, then ICE has to find other places,” Vaughan said. “They’re bringing this on themselves.”

Courthouse arrests have alarmed local advocates and politicians as well as state judges.

In January, county commissioners in Multnomah County, which includes Portland, along with the sheriff, the district attorney and the presiding state judge for the county, issued a statement protesting ICE activity at courthouses.

“Anything that increases the fear of people accessing our courts is of grave concern,” the officials said. “Courthouses need to be safe locations for people to access justice: whether to contest an eviction, seek a restraining order from abuse, or attend a custody hearing. Now, they may be too afraid to show up.”

Chief judges in Washington state and California issued similar protests in March. Attorney General Jeff Sessions and Homeland Security Secretary John Kelly responded to the California complaint, saying that sanctuary policies in that state and others “threaten public safety, rather than enhance it” by forcing ICE to make arrests in public places.

“Courts are not just for criminals,” said Julie Sullivan-Springhetti, a spokeswoman for Multnomah County. Even walk-in legal clinics outside the courthouses have seen fewer clients as a result of fear about ICE, she said, and people with legal immigration status are among those staying away.

Barros, in Rhode Island, said his bill was based on a similar one in California that would require that schools, libraries and health facilities be “safe and accessible” to all residents, regardless of immigration status.

Another proposal in California would bar employers from letting immigration agents into work areas without a warrant. An Illinois bill would bar schools, churches and health care sites from letting immigration agents in without a warrant. And a Pennsylvania bill asks the state attorney general to draft policies for schools, health care facilities and courthouses “limiting assistance with immigration enforcement to the fullest extent possible.”

New York City in March also moved to block immigration enforcement in public schools, and Denver officials in April asked ICE to stay away from schools and courthouses. An ICE official said the department meets regularly with community officials to discuss policy and procedure.