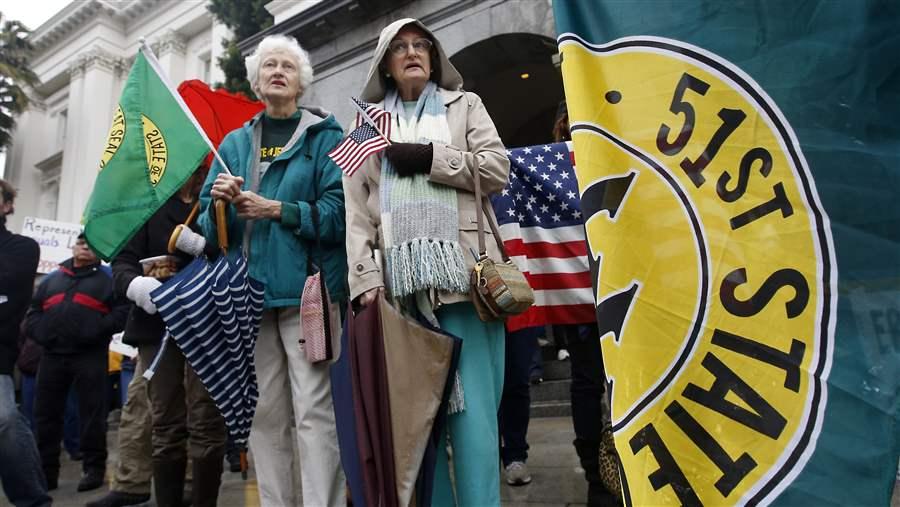 Supporters of a new state along the California-Oregon border rally at the Capitol in Sacramento in 2016. Recent secession efforts have included fairly large, ongoing campaigns in Texas and California and smaller pushes in Oklahoma, Maine, Utah, West Virginia and New York’s Long Island.

Editor's Note: This story has been updated to correctly say the 10th Amendment relates to state powers.

APPOMATTOX COURT HOUSE, Va. — When two generals signed papers here 152 years ago bringing the Civil War to a close, they ended the bid by 11 Southern states to secede from the Union. And that, most believed, was that.

Yet ever since the South’s Gen. Robert E. Lee surrendered to the North’s Gen. Ulysses S. Grant in 1865, groups across the United States have advocated seceding from the country, their own states, or in a few cases, their cities. Recently, these efforts have ranged from fairly large, ongoing campaigns in Texas and California to smaller pushes in Oklahoma, Maine, Utah, West Virginia and New York’s Long Island, among others.

Just last month, a longshot effort to allow Californians to vote on seceding fell apart after one of the founders dropped out amid criticism of his ties to Russia. But a new group pushing secession has vowed to collect the nearly 600,000 signatures required by July to put the measure on the November 2018 ballot.

Last May, the Texas Nationalist Movement came within two votes of adding Texas independence language to the state’s Republican platform. And in Oklahoma, Republican state Sen. Joseph Silk in January introduced a bill to remove the word “inseparable” from the sentence in the state constitution describing Oklahoma as “an inseparable part of the Federal Union.”

Get the story of the day from our state policy reporters — plus five top reads chosen from around the web by our editors.

The move for independence, whether it’s from the right of the political spectrum as in Texas, or the left as in California, reflects the political division felt across the country, said Edward Meisse, a supporter of the Yes California secession group that just disbanded. “We have two diametrically opposed philosophies in our country, and we’re just not getting anywhere,” he said. “I think we should allow states to secede so California can be California and Texas can be Texas.”

Nationwide, interest in seceding is fairly strong. An online survey by Reuters in 2014 found that nearly one in four Americans want their state to secede. The desire was highest — 34 percent — in the Southwest, which includes Texas.

In some areas of the country there is no organized effort to split from the U.S., just a feeling that “we’ve been left behind and no one cares about us,” said Dwayne Yancey, editorial page editor of The Roanoke Times who in March wrote what he called a “tongue in cheek” editorial, “Should Southwest Virginia secede from the rest of Virginia?”

“Historically we have felt left out, and a number of those issues are coming to a head,” Yancey said. Southwest Virginia is mostly rural, white and poor. Coal mining has declined dramatically, although the city of Roanoke has had a stable economy with Virginia Tech University and other employers, he said. Yet, the feeling is that the state Legislature in Richmond is “not doing right by us here.”

Despite the heightened interest in secession, many lawyers and constitutional scholars say it’s legally impossible for a state to secede because the U.S. Constitution doesn’t address the issue, and has no provision to allow it.

The U.S. Supreme Court declared in an 1869 case, Texas vs. White, that the United States is “an indestructible union.” And the late U.S. Supreme Court Justice Antonin Scalia wrote in a 2006 letter that “if there was any constitutional issue resolved by the Civil War, it is that there is no right to secede.”

Yet some lawyers, historians and secession groups argue that the 10th Amendment of the Constitution gives states the right to decide many issues which are not in the power of the federal government. And despite the legal obstacles, the desire for self-rule and separation from others with different political, social or moral views remains strong among some groups.

Being part of a secession movement is “about being a part of the group as it circles around its sacred values and marks out what is good and what is evil,” said Jonathan Haidt, a psychologist and professor at New York University’s Stern School of Business who has written about the moral differences between liberals and conservatives. “Joining a secession movement is an act of both self-expression and group expression,” he said.

One of the first secession movements arose in New England, prompted by the War of 1812. A trade embargo against England had hurt New England’s economy, and a convention was held to discuss secession. Victory in that war put a halt to the movement.

Secession movements have sprung up sporadically ever since. But the election in 2008 of the first African-American president, Barack Obama, set off a spate of efforts to secede, some of which were tied to white supremacist movements.

In California, the election of Donald Trump as president has fueled secession efforts.

“We had 11,000 [signatures] before Trump, then that jumped to 30,000 in a day, then to 45,000,” said Marcus Ruiz Evans, co-founder of Yes California. “People joined because they hate Trump, but we’ve always said, ‘This isn’t about Trump. This is about a country that would elect him.’ A racist, a misogynist? Those are people you want to associate with?”

A second group in California led by Silicon Valley venture capitalist Tim Draper supported an effort to break California into six states. But supporters weren’t able to collect enough signatures to put it on the November 2016 ballot.

Brexit, the U.K.’s vote in June 2016 to leave the European Union, has heartened some U.S. secessionists, many of whom also support Scotland’s efforts to separate from the U.K. Draper’s group is working with Brexit supporter Nigel Farage of the U.K. to figure out a new strategy for splitting California into six states.

Texas and California secession groups argue that their state economies are large enough to stand alone, and that they pay more in taxes to the federal government than they get in services in return.

There’s no doubt that some secession groups are pro-white, anti-immigrant and racist, according to the Southern Poverty Law Center, which studies hate groups nationwide. In 2000, it named the League of the South, formed in 1994, as a hate group. Since 2014, the LOS has funded a billboard campaign in Florida, Tennessee, Georgia, Alabama and Arkansas with one big hashtag: #SECEDE.

Neither the former Yes California nor the Texas Nationalist Movement is on the SPLC’s list of hate groups, but the center says that “neo-Confederates,” who in many cases are openly secessionist, favor segregation and suggest white supremacy.

Could a State Pull Out?

Groups in Texas and California argue, in part, that because their states were once independent, they can be independent again. (A group of northern Californians claimed independence from Mexico for 25 days in 1846.)

But the U.S. Constitution doesn’t address the issue of secession. It neither gives states the right to secede nor denies it, says Gary Gallagher, director of the John L. Nau III Center for Civil War History and professor of history at the University of Virginia.

He and other legal scholars also point to the Supreme Court’s ruling in 1869. That case stemmed from Texas’ sale of U.S. government bonds during the Civil War, to help fund the Confederacy. When Texas rejoined the U.S. after the war, it argued the bonds had been sold illegally and wanted its money back.

The court ruled against Texas, declaring that Texas had “entered an indissoluble relation” when it joined the U.S., and that the country itself is a “perpetual union.”

Miller, who heads the Texas Nationalist Movement, sees it another way.

Craig Lerner, professor of law at George Mason University in Arlington, Virginia, disagrees. “We had a war over secession once, and that war seems to validate Lincoln’s view that a state can’t secede without the consent of all the states.”

Lerner agrees that Texas is a bit different because it used to be an independent state. But since Texas became a part of the United States in 1845, it lost that freedom to separate, he said.

Why do groups like the Texas Nationalist Movement persevere?

“The idea that people say that things will never happen, that this is some kind of pipe dream, well, I’m pretty sure that was the feeling of the British when they wanted to get out of the E.U.,” Miller said.

“Ever since the end of World War I, people have been seeking self-determination,” he said. “Look at Scotland. It never got a vote, but after 800 years, it gets two.” That, he believes, could happen for Texas.

Perhaps. But for now and the foreseeable future, only one flag flies at Appomattox Court House in Virginia: The U.S. flag.