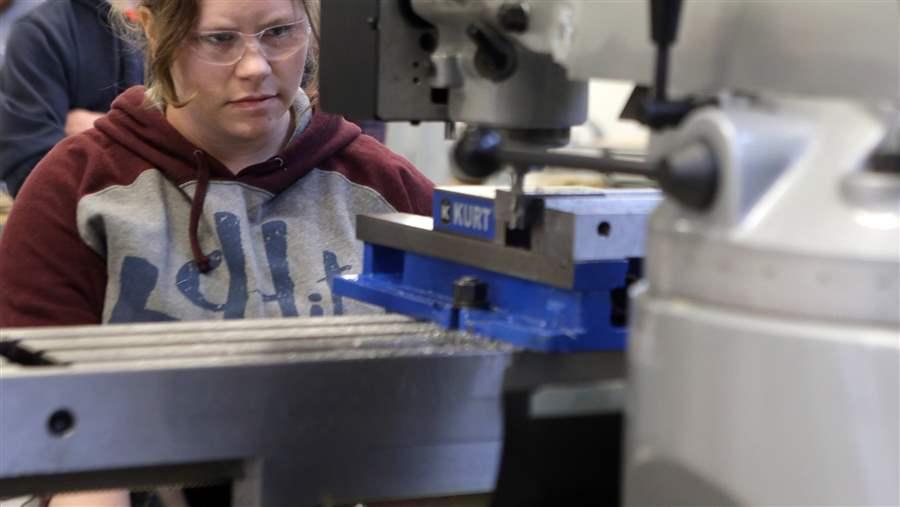 A student in a machining class at Ivy Tech Community College in Valparaiso, Indiana. The state has created a scholarship for students pursuing short-term training for skilled jobs in manufacturing and other industries.

Community colleges are known for their associate degree programs. But these days, many community colleges award more certificates than degrees. Certificates typically take less than two years to complete and promise to prepare students for entry-level jobs in fields such as medical insurance coding or welding.

Now Kentucky and Indiana have created scholarships that would make some certificates tuition-free. The new grants draw inspiration from the free college idea pushed by Democrats like former President Barack Obama and embraced by Oregon, Tennessee and New York. But they’re less focused on reducing soaring tuition prices and more focused on training students for jobs that are sitting open.

“We need to do a better job making sure employers can find people who actually have the skills,” said Teresa Lubbers, the Indiana commissioner for higher education, who pushed for the scholarship program Indiana’s Republican Gov. Eric Holcomb signed into law last week.

States are stepping in to cut the cost of job training as employers complain that they can’t find the workers they need. Reducing the cost of certificates helps students, but also helps employers save money on tuition assistance for their workers.

Arkansas recently put its own twist on free college with a grant that makes two-year degrees free for students of high-demand subjects, such as computer science.

Critics of the free certificate programs warn that they could have a limited impact. Many students already get enough federal and state aid to cover tuition. And while a few months of training leads to earnings gains, studies suggest that certificates lead to less earnings growth over time than degrees do.

“Free certificate programs have broad appeal. They’re directly linked to available jobs in the workforce and have a relatively small price tag in the state budget,” said Tom Harnisch, director of state relations and policy analysis for the American Association of Colleges and Universities.

But regulators will need to work closely with economic development experts to make sure certificates that get funding really do lead to good jobs, Harnisch said. And the Indiana and Kentucky programs include so many eligibility requirements that it’s unclear how many students will benefit.

Certificates are the fastest-growing college credential that the federal government tracks. Between 2000 and 2010, the number of certificates awarded almost doubled, to more than a million, according to a consulting firm’s analysis for the National Center for Education Statistics.

At Indiana’s Ivy Tech Community College, which has 32 campuses across the state, certificates now make up over half of awards given for the completion of academic programs. The college has been adding more certificates to respond to the needs of employers, said Chris Lowery, senior vice president for workforce alignment at Ivy Tech.

Ivy Tech’s certificate programs include a one-year course that trains students to become phlebotomy technicians — people who draw blood from patients in doctors offices, hospitals and labs — and an 18-month program that introduces students to carpentry.

But not all Ivy Tech certificates are tailored to a specific occupation. The business administration technical certificate, for instance, is for a one-year crash course in everything from management and marketing to Microsoft Office.

And the certificate the college awarded most last year was a liberal arts and sciences credential that’s embedded in an associate degree program. Students earn the certificate when they finish their general education requirements. They can then transfer those credits easily to one of six partner universities. 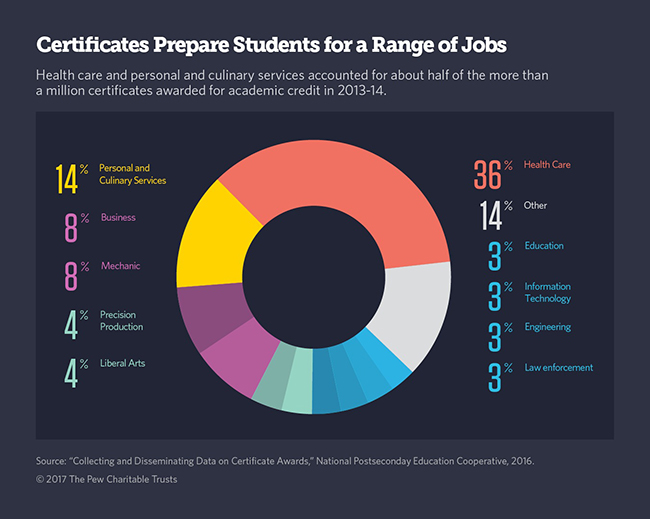 National studies show that earning a certificate pays off, albeit modestly. Certificates increase men’s earnings by about $2,000 a year on average and women’s earnings by almost $3,000 a year, according to a review of current research published in March by the Center for Analysis of Postsecondary Education and Employment (CAPSEE), a research group funded by the U.S. Department of Education.

But the earnings gains vary by state, CAPSEE found, which could be due to differences in certificates or in the local economy. In Virginia, for instance, researchers found no statistically significant increase in earnings for certificate holders. In Arkansas, one study showed, men who earned certificates actually earned less than men who hadn’t gone to college at all.

Associate degrees deliver a bigger increase in earnings, CAPSEE found: $4,600 a year for men and $7,160 for women. They also seem to set students up for more career advancement.

In a separate study of Ohio graduates, CAPSEE researchers found a divergence between the earnings of people who received an associate degree and people who earned a certificate that took almost as long to complete. Both sets of graduates experienced a similar payoff right after graduation. But associate degree holders started to pull ahead after about a year, and 10 years later had higher incomes.

“The crucial difference between certificates and degrees is that while certificates give you a short-term bump in your earnings, [your earnings] don’t continue to grow,” said Thomas Bailey, director of CAPSEE and the Community College Research Center at the Teachers College of Columbia University.

Bailey said students may leave degree programs with a deeper understanding of the subject matter and more general skills, such as how to think critically and work in teams, allowing them to better adapt to changes in their field. Certificates are a better option for adults who need to quickly upgrade their skills than for young people coming out of high school, he said.

In some cases, a certificate is a stepping stone to higher education. About one in four students who earn a certificate go on to earn an associate or a bachelor’s degree within six years, according to the National Student Clearinghouse Research Center. But that number may be inflated, because some certificates — like Ivy Tech’s liberal arts certificate — are embedded in degree programs.

Kentucky’s Legislature last year passed a bill to make community college tuition-free. When it reached Republican Gov. Matt Bevin’s desk, however, he vetoed it, saying the proposal didn’t “permit funding to be targeted based on true need and … may leave behind those students with the greatest need.”

Instead, Bevin used the money lawmakers had appropriated to create a certificate scholarship.

Eligible students must be state residents without a college degree. They must be enrolled in certificate programs the state has identified across five industries: health care, advanced manufacturing, transportation and logistics, business services and information technology, and construction. The grant money will pay any remaining tuition charges students face after federal and state aid kicks in.

The grant will likely go to working adults and middle- and upper-income students who don’t qualify for much other aid, said Rebecca Gilpatrick, director of student aid services at the Kentucky Higher Education Assistance Authority. Her office estimates that with $15.9 million dollars to spend, it will award scholarships to about 8,000 people.

In Indiana, lawmakers have allocated $4 million over two years to pay for grants structured like Kentucky’s — as “last dollar” scholarships for students in training programs that regulators will identify. The Indiana scholarships will only be open to students who aren’t financially dependent on their parents or eligible for other state financial aid. “This is designed for adults,” Lubbers, the Indiana commissioner, said.

And Indiana has gone a step further, instructing its Department of Workforce Development to explore creating a similar grant for students in non-credit training programs at community colleges and elsewhere — for instance, courses that prepare students for the commercial driver’s license exam. Students can’t get federal financial aid for non-credit programs, although they may be eligible for other workforce training grants.

Indiana won’t be the first state to offer grants for students in non-credit programs. Virginia last year created a grant program for students in training programs that range from industry certifications in fields like IT security to continuing education for medical assistants and industrial maintenance workers.

States that want to make certificates free have to grapple with the range of non-degree programs that community colleges offer. Not only is the terminology confusing, but short-term training ranges from a weekend course in leadership development or a three- or four-week class to obtain a commercial driver’s license to an 18-month immersion in auto mechanics that could count toward an associate degree.

“We have to simplify the complexity of this,” said Martha Kanter, a former undersecretary of the U.S. Department of Education and director of the College Promise Campaign, a nonprofit initiative that advocates for making community college free.

States need to make sure they’re guiding students into certificate programs that lead to multiple jobs, not just one job, and act as a stepping stone to higher education, Kanter said. Training to earn a commercial driver’s license and become a trucker, for instance, might not lead to a long-term career. “In 10 years, we’re going to have driverless trucks,” she said.