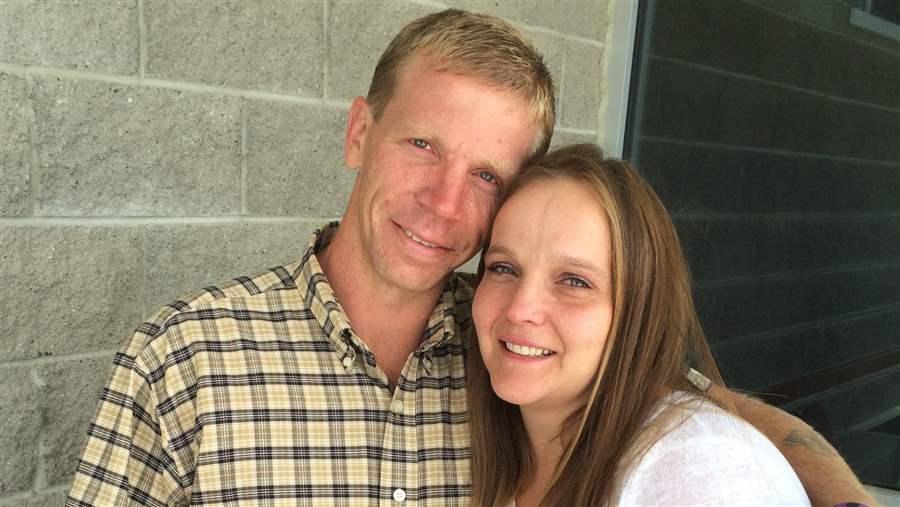 When Russell and Amber Foster were teens, their relationship landed Russell in prison. Now some states, including their home state of Montana, are moving to reduce the penalties for sexual relationships between teens.

More than 20 years ago, when Russell Foster was 19 and his girlfriend Amber was 15, Montana’s laws tore them apart, sending Russell to prison for four years for having sex with a minor.

Their story mostly has a happy ending. They reunited when Russell got out of prison. They’re married now, with four kids, and living in Glasgow, Montana. And last month, Montana Gov. Steve Bullock, a Democrat, granted Russell clemency. But there have been struggles, too. Russell’s record has made it hard for him to find work, and being a registered sex offender has limited where the family can live.

Hoping to spare other young couples severe consequences like those, the Fosters pushed for a bill the Montana Legislature passed last month that would reduce the penalties for teens caught engaging in consensual sexual activity. The measure also would expand the age range covered by the state’s existing Romeo and Juliet law. Named for Shakespeare’s young lovers, the laws vary from state to state but typically provide legal protections or reduced penalties for teens close in age who engage in sexual activity.

Tough penalties for teens convicted of illegal sexual behavior were often written into statute over the past 20 years as part of broader efforts by state legislatures to protect children from predators, following federal laws that called for better tracking of sexual offenders.

But more recently, steep penalties for sexual contact between teens have made some prosecutors reluctant to bring charges, said Tom Raynes, executive director of the Colorado District Attorneys’ Council.

In Cañon City, Colorado, prosecutors in 2015 declined to charge about a hundred middle and high school students who were using their cellphones to exchange nude images of one another. The state currently only has one charge at its disposal to address such cases: sexual exploitation of a minor, a felony that requires sex offender registration.

Colorado legislators are now considering a bill that would establish new, less severe penalties for teens caught sexting or sharing photos with a third party, something the bill’s sponsor, Democratic state Rep. Pete Lee, said could help address situations where teens are “trading pictures of each other the way young kids trade Pokemon cards.”

David Finkelhor, director of the Crimes Against Children Research Center, said bills that limit penalties for consensual sex are less about condoning the activity than acknowledging the long-term consequences for children with records as they head to college and look for jobs.

“The law is still far too punitive with juvenile offenders given that recidivism rates are low and rehabilitation rates are high and therapy seems to be successful,” he said.

Legislators say crafting laws to limit sexual activity between teens requires striking a balance between giving young people a chance to explore their sexuality and protecting victims and punishing offenders when things get out of hand. Lawmakers in Montana resisted calls to expand the ages covered by the state’s Romeo and Juliet law even further for fear that young teens could be exploited. And in Colorado, prosecutors pushed to retain the right to charge some children with felonies.

“Fundamentally you have to understand that there are in fact sexual predators who are teenagers,” Raynes said. “That’s sad to say, but they’re out there, and we need to have that tool available in those situations.”

Sex with someone below the age of consent is typically illegal, but most states impose lesser penalties for consensual teen sex.

Some laws, like Hawaii’s, allow teens who are close in age to have consensual sexual relations. But others, like Montana’s, still consider the act illegal and cover more narrow age ranges.

Under the new legislation approved by the Montana Legislature, sex between people 14 through 18 would still be illegal, but the punishment would be limited to five years in prison with judicial discretion over whether the offender needs to register. The bill is awaiting the governor’s signature.

“We are not exonerating 18-year-olds of their responsibilities to recognize the vulnerability of 14-year- olds who, by Montana law, are still children,” bill sponsor Sen. Sue Malek, a Democrat, told the Montana Senate Judiciary Committee in January. But automatically adding perpetrators to the sex offender registry ruins their lives without making the community safer, she said. “We want to give an 18-year-old who believed they were in love, who made a serious mistake, a chance for a good life and future.”

Malek’s bill wouldn’t have helped Russell Foster, because he was a year past the top end of its age range. Prosecutors and those who treat sex offenders supported the bill, but groups including the American Civil Liberties Union of Montana called to expand the age range to include people in their early 20s.

Brenda Erdelyi, president of the Montana Sex Offender Treatment Association, said being attracted to a 14- or 15-year-old who has already gone through puberty doesn’t make young adults deviant. But brain development continues into the mid-twenties, and without fully developed prefrontal cortexes, young adults struggle more with problem-solving and impulse control. She suggested expanding the bill to cover 13- to 21-year-olds, as long as the activity is between people who are no more than five or six years apart.

But some legislators worried that expanding the age range would allow young adults to take advantage of children. “When you get to age 13, you’re bumping up on that boundary of being a real, actual child instead of an adolescent,” said Montana state Sen. Chas Vincent, a Republican.

Mai Fernandez, executive director of the National Center for Victims of Crimes, said the law needs to protect young people who consent to sexual activity with someone older who may have more power and resources.

“When it gets bigger than a four-year age gap, it’s very hard to tell if this is really two consenting adults or if this is someone who has an enormous amount of power over the victim,” she said. “Even if the victim doesn’t see it that way at the time, they may see it that way later in life.”

That’s the idea behind a bill introduced in Indiana, where the current Romeo and Juliet provision covers people under 16, the state’s age of consent. The bill would create a new crime of “indiscretion” for people over 22 who have sex with a 16- or 17-year-old.

But Amber Foster said she was an “active ingredient” in her relationship with her husband when they were teenagers, and the law should respect that.

“It’s put a lot of guilt on my head,” she told Montana legislators in January. “I never wanted him charged.”

In Colorado, where the House passed a bill last week that includes new, lower penalties for teens who are caught sexting, prosecutors successfully argued that felony charges should remain an option in extreme circumstances.

In sexting cases, people whose images are shared can also face legal repercussions. And advocates for victims in Colorado pushed to limit the penalties for teens whose sexting was only brought to light when another teen shared their image. Under the bill, they would likely face a $50 fine or be required to take a class on the consequences of sexting.

In more complex cases, say where coercion is involved or multiple photos are shared, prosecutors argued they should be able to charge young people with sexual exploitation of a minor — the felony that prosecutors in Cañon City passed over. It’s the only level of conviction that requires sex offender treatment.

Under the Colorado legislation, which now moves to the Senate, teens found guilty of a felony could face time in a juvenile facility, but would most likely receive treatment. They could also petition the court to not be included on the sex offender registry.

Lee, the bill sponsor, agreed that some cases can get serious — he pointed to instances where girls have committed suicide after having images of their bodies shared over the internet. But, he argued, a felony charge is serious too.

“It disables people from living in certain places, getting into college, getting jobs — there are all sorts of collateral consequences that arise from a felony. I think society should reserve a felony for the most egregious and opprobrious crimes, and sexting usually doesn’t fall into that category,” he said. “Most of the time sexting is a casual exploration of sexuality by teenagers.”