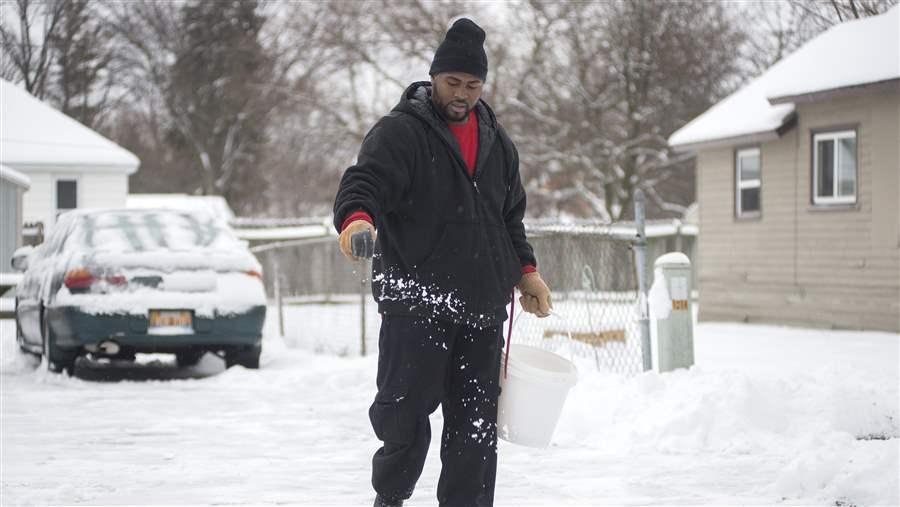 Ontayveis Underwood sprinkles salt after clearing snow from a neighbor’s driveway and sidewalk in Saginaw, Michigan. Many states and cities are educating people on how much salt to use.

Herman Felstehausen and some of his neighbors in the Spring Harbor area of Madison, Wisconsin, say the water flowing out of their faucets is beginning to taste a bit strange.

“The water definitely tastes different,” said Felstehausen, a retired urban and environmental planner who has lived in the area for 30 years. “It’s a mix of chemicals, and chloride is one of them.”

Spring Harbor’s water source is a well at one of the lowest points in the neighborhood. Every winter when the snow and ice melt, more than 100 tons of road salt that people spray and spread on the neighborhood’s roads and sidewalks runs into the soil. Eventually, some of it makes its way into the well.

Most Spring Harbor residents can’t tell exactly what’s different about the taste of their water — at least not yet. But Madison’s water utility warns that if the chloride level in the water continues to rise, the salty taste will be unmistakable. At that point, the utility may have to rebuild the well to filter out the minerals or shut it down.

In the last 40 years, Midwestern and Northern states have dramatically increased their use of salt as a de-icer. The sodium chloride has seeped into the nation’s lakes and waterways and wells, where it is increasingly threatening drinking water, aquatic life, fisheries, irrigation and recreation, according to a new study that is the first to detail the extent of the problem on a national scale.

As the environmental effects become clearer, many state and local agencies in states such as Illinois, Minnesota, New Hampshire and Wisconsin are trying to use less road salt, and to convince the public to do the same. They are using technology to monitor weather conditions to decide when to use salt, and when not to. They are ratcheting up their use of liquid salt brine, which allows them to use less road salt and makes it stick better. And they are training their employees and the public to use as little salt as required to do the job.

It’s important to correct the mindset that more salt is better, said Amy Barrilleaux, spokeswoman for the Madison Water Utility, which is part of the Wisconsin Salt Wise partnership, an effort to educate people on proper salt use. “That’s the human tendency, to think that if this much is good, then this much is really good, and that’s not really the case.” 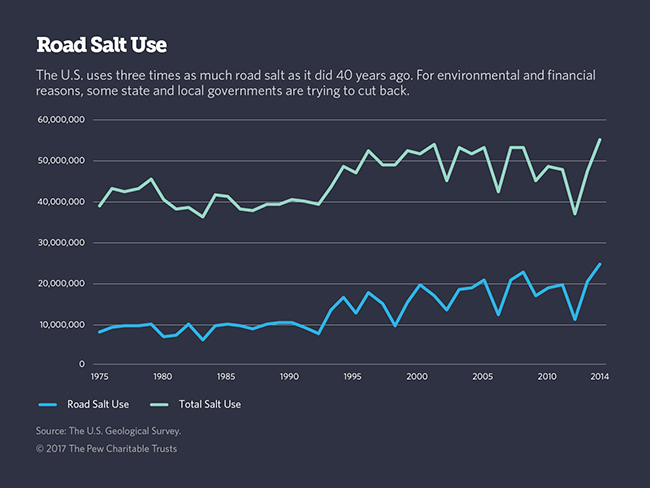 The most common way that agencies are cutting back on road salt is by spraying liquid salt brine — most commonly 23 percent salt and 77 percent water — instead of just spreading salt. This method is estimated to cut salt use by at least 30 percent, according to a report by Clear Roads, a national research consortium focused on testing winter maintenance materials, equipment and methods.

Treating roads with liquid helps the salt stick. It also creates a barrier between the road and the snow and ice to prevent them from bonding to the pavement, said Bret Hodne, public services director for West Des Moines, Iowa, who helps the American Public Works Association with its winter maintenance training.

Some agencies have gotten creative in seeking to make the salt stick even better by adding sugarcane molasses, cheese or dregs from beer-making to the brine. West Des Moines uses beet molasses. “It’s like putting Coca-Cola down,” Hodne said. “It’s sugar and it’s sticky.”

In Wisconsin, a state known for its cheese, Polk County has sprayed its roads since 2008 with cheese brine — a liquid mixture used in the process of making cheese that it gets from a local dairy. The county found it reduced the amount of salt needed on the roads and the county’s costs, said Moe Norby, the county’s highway commissioner.

Salt melts ice only when the pavement is warmer than 15 degrees. Brines are more effective in lower temperatures. To ensure that they are using salt and brine at the right times, in the right places, and in the right amounts, many transportation agencies use road sensors that monitor pavement temperatures. Some also are equipping snowplows with tracking gear to collect information on weather, road conditions, and how much salt is being used.

The use of thermal or porous pavement to melt snow or reduce runoff isn’t yet widespread, but it may be in the future. Thirty-four government agencies are members of Clear Roads, and they contribute $25,000 annually to fund research on snow maintenance technology.

Efforts to reduce road salt have paid off in many places. New Hampshire is using about a quarter less salt than it was 10 years ago. The city of Waconia, Minnesota, has cut its salt use by about a third since 2010.

Minnesota, which spent about $18.5 million on the 194,700 tons of road salt it used last winter, has tried new techniques for years in an effort to cut down on salt. The state is researching alternatives and eventually wants to “get out of the salt business,” said Steve Lund, maintenance engineer for the state’s department of transportation.

In Chicago, a work group is studying how to use less road salt to get chloride levels in local waterways down. In 2015, the Illinois Pollution Control Board set a new water quality standard — less than 500 mg per liter of chloride in the area’s waterway system and Lower Des Plaines River — which goes into effect in 2018.

But the new rule could cause problems for local or regional wastewater reclamation plants, which would be required to ensure the water they release into local waterways has chloride levels under the threshold. The Metropolitan Water Reclamation District of Greater Chicago, which reclaims an average of 1.4 billion gallons of used water daily, set up the work group to make recommendations.

As service areas have widened in many places and people have come to expect clear roads, the nation’s reliance on road salt has grown steadily, from 8 million tons in 1975 to 24.5 million tons in 2014, according to U.S. Geological Survey data.

Curbing that amount would have financial as well as environmental benefits because many states and big cities spend millions of dollars on road salt every year. Even after cutting back, New Hampshire spent $13.6 million on road salt last winter and spread 225,094 tons of it.

Hodne, the public services director for West Des Moines, said winter road maintenance has become his passion. When he started his career 28 years ago, he said, it was common to use a mix of salt and sand. But many cities stopped using sand because it clogged storm pipes. Some have tried minerals other than salt, such as magnesium chloride. But salt usually costs less.

The Global Lake Ecological Observatory Network researchers who authored the recent study found that most lakes for which they could get long-term data had increasing levels of chloride, thought to be caused mainly by road salt.

The federal government doesn’t set limits on chloride levels in lakes or waterways, but the Environmental Protection Agency sets a threshold beyond which aquatic life may be affected. The study authors expect that many lakes will exceed the EPA’s freshwater criteria of 230 mg of chloride per liter soon. Around that level, people drinking the water may start to taste salt.

Hilary Dugan, the study’s lead researcher and an inland water researcher at the University of Wisconsin, Madison, said that eventually the chloride will kill plants and animals that aren’t able to adapt.

But Wilf Nixon, a vice president for the Salt Institute, a trade association that advocates for the benefits of salt, said the study overestimates the spread of salt in the nation’s lakes. And he said that any substance used to de-ice will have an environmental impact.

Nixon, who has worked in the winter highway maintenance field for about 30 years, pointed out that salt is proven to save lives. Having salt on the road reduces crashes by 87 percent, according to one study sponsored by the Salt Institute. Still, he said that it’s important for people to learn the correct amount of salt to use.

Minnesota, New Hampshire and other states, along with cities and towns, are trying to spread the word about cutting the use of salt. They are hosting trainings for their employees and private contractors, but also creating education campaigns for the general public. The members of the Wisconsin Salt Wise partnership run a website and a social media campaign, hand out brochures and post signs.

In McHenry County, Illinois, county and city officials offer an annual seminar for government employees and private plowing contractors. The seminar focuses on the effect that salt can have on roads, vegetation and infrastructure, and urges attendees to use “effective, efficient, environmentally friendly snow and ice control,” according to Beth Skowronski, assistant maintenance superintendent.

Spreading less salt would allow the contractors to save time and money. But governments and private companies also have good reasons to be liberal with its use: slip and fall liability suits are pricey and pervasive. Contractors and public employees tell environmental advocates that if they want them to use less salt, they want better legal protections.

New Hampshire in 2013 reduced the legal liability for contractors who participate in state training, which costs them $200. A similar bill is pending in Minnesota. In Wisconsin, Madison is creating a voluntary training program for salt applicators.

Madison shut down the Spring Harbor well earlier this year and took samples of the water to determine if there is a way to reduce the amount of water collected with high amounts of sodium chloride.

Felstehausen, the Spring Harbor resident, said he appreciates the city’s efforts. He noticed this winter that the neighborhood’s main road wasn’t salted as much and crews reverted to sand on smaller streets.

But he and his neighbors still worry about the damage that already has been done. Some, conscious about their intake of salt, are buying bottled water.

“If you want to excite people in a nonpartisan way, just say your water well is contaminated,” he said. “The whole community will start calling.”