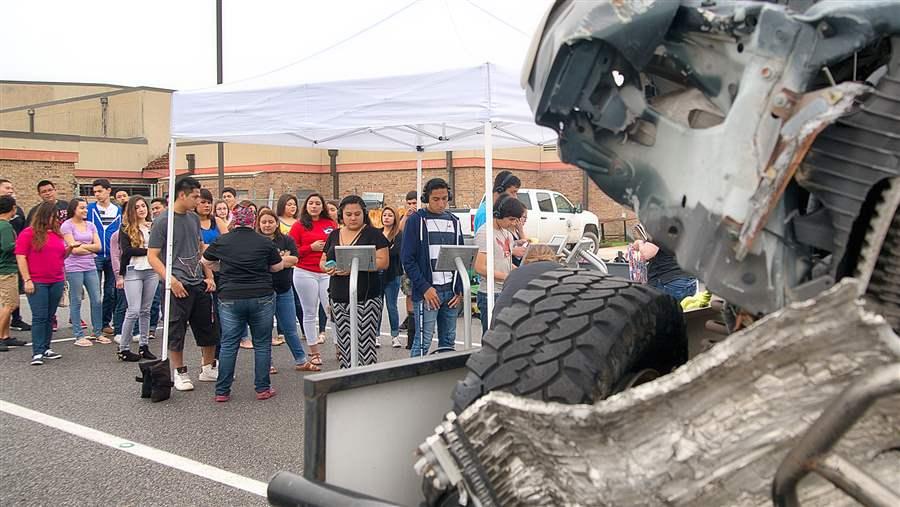 Students from Harlingen High School South in Texas view the remains of a truck demolished in a crash in which two teens survived because they were wearing their seat belts. Nearly three-dozen states allow police to stop a vehicle and ticket motorists solely for not wearing a seat belt.

In his 28 years with the Utah Highway Patrol, Lt. Lee Perry has seen a lot of carnage from crashes in which motorists weren’t wearing seat belts. One crash in 2013 really struck home: He arrived at a scene where two teen passengers in a truck had been ejected in a rollover and discovered one was the son of a family friend. Both teens died.

Perry, who is also a state representative, later met with the mothers of the two teens, who urged him to take action. He did. He sponsored a bill that would let police stop a car and ticket people solely for not wearing a seat belt — a move designed to act as a deterrent to scofflaws by increasing the chances they could get pulled over and possibly pay a $45 fine.

When his bill became law in 2015, Utah became the 34th state, along with the District of Columbia, to have a “primary seat belt,” or “click it or ticket,” enforcement law.

“I’m hoping this will not only save lives, but it will save tax dollars,” Perry, a Republican, said. “We spend a lot of money on hospital costs, and commerce gets shut down on our highways for long periods of time if we have to block them when there’s a serious accident and someone is ejected. When you start to look at the dollars and cents, it made sense.”

Right now, 15 other states have “secondary enforcement” laws, which mean police can only ticket people for a seat belt violation if they get pulled over for another reason. (New Hampshire is the only state that does not require adults to wear seat belts.)

But that may be changing, as the nation experiences the most dramatic two-year increase in road-related fatalities in decades. Bills that would toughen enforcement are pending in Alabama, Massachusetts, New Jersey, New York, North Carolina and Vermont. And Mississippi enacted a law expanding primary enforcement. (A move in Utah to revert to secondary enforcement next year was beaten back in the Legislature.)

Not everyone is convinced the tougher laws reduce fatalities. And some opponents say the laws are another example of government interference and can lead to racial profiling.

Massachusetts state Rep. Jeffrey Roy, who is sponsoring a primary enforcement bill in his state, said he understands some may feel it impinges on their individual rights but he thinks it will motivate more people to wear seat belts, which will save lives.

“I’ve heard the Big Brother argument that if I want to be a danger to myself, that’s up to me,” said Roy, a Democrat. “But the minute you cross the line and become a danger to others, I think a statute is needed. Your right to swing your fist ends at the tip of my nose.”

Seat Belt Use Up

Over the years, seat belt use nationally has jumped from nearly 71 percent in 2000 to 90 percent in 2016, according to a survey by the National Highway Traffic Safety Administration (NHTSA), which sends observers to randomly selected sites each year.

Federal officials estimate seat belt use in passenger vehicles saved about 14,000 occupants’ lives in 2015. Nearly half of the 22,400 occupants killed in crashes that year were unbuckled.

Because some people don’t buckle up, safety experts say primary enforcement laws are needed to pressure motorists into it.

“Secondary enforcement laws lack teeth. Cops have to find another reason to pull you over,” said Kara Macek, spokeswoman for the Governors Highway Safety Administration. “Primary laws are really the only effective ones.”

The primary enforcement laws vary considerably. Laws in some states apply only to occupants in the front seat, others also apply to those riding in the rear. Some laws cover everyone in the vehicle, others cover only adults and children of a certain age. Some states allow police to ticket drivers and passengers, others only drivers. One common element: Almost every state has primary enforcement for children in safety seats.

Penalties also vary. In Utah, for example, drivers and passengers 16 and older can be ticketed. For a first offense, police can only issue a warning. But on a second one, they can issue a $45 citation, though it can be waived if the violator completes an online, 30-minute safety course.

A new study published in the American Journal of Preventive Medicine that analyzed data from 2000 to 2014 in states that upgraded from secondary to primary enforcement questions whether the tougher laws are still effective in reducing traffic deaths.

“There’s no evidence that these laws are reducing fatalities,” said Sam Harper, an associate professor at McGill University who co-authored the study.

Harper said earlier studies that showed primary enforcement laws saved lives were done when seat belt use was much lower, cars were less safe, road design wasn’t as good, and there were no speed cameras. Nowadays, he said, more people buckle up regardless of whether a state has primary or secondary enforcement laws.

The Insurance Institute for Highway Safety, a nonprofit research group funded by auto insurance companies, takes a different view of primary enforcement laws. It says they do reduce fatalities and deter motorists from bad behavior.

Chuck Farmer, a vice president at the institute, estimates that moving to primary enforcement reduces traffic deaths by about 7 percent. He said police in primary enforcement states also run successful traffic stop operations such as “Click It or Ticket,” in which they target motorists not wearing their seat belts.

“Secondary states can’t do that,” he said. “People in those states realize the police aren’t out there enforcing seat belt laws, so they’re not as worried about getting pulled over if they don’t wear them.”

Too Much Government Intrusion?

Foes of the tougher laws argue they tread on individual liberties and can be a tool for racial profiling.

In Nevada, where a measure failed this session, traffic safety experts and a trauma surgeon were among those who testified in favor of the bill at a March hearing. But several people opposed the legislation, including Janine Hansen, state president of Nevada Families for Freedom, a conservative advocacy group. She called it another example of government interference in people’s lives.

“I think we’re becoming more and more of a police state and it really concerns me,” she testified.

Hansen said her brother was killed in an auto accident in 2002 and was not wearing his seat belt, but he had made a conscious decision to do that because he didn’t want the government telling him what to do.

“Passing another law isn’t going to make people who are already acting irresponsibly by not wearing their seat belt do it,” she said. “They’ve already made a choice.”

Lobbyists from public defenders offices in Clark and Washoe counties also opposed the Nevada bill. They worried that a primary enforcement law would lead to minorities getting stopped and ticketed more often than whites. That has been a common concern in other states, especially among civil rights groups.

But Farmer of the insurance institute said several studies have shown no difference in ticketing rates for minorities and non-minorities in states with primary enforcement laws. “I can understand that concern but there’s no evidence,” he said.

One 2011 NHTSA study not only found no evidence of racial profiling but concluded that the percentage of tickets issued to minorities remained the same or decreased slightly after states moved from secondary to primary enforcement.

However, a recent American Civil Liberties Union study of Florida, which has a primary enforcement law, reached a different conclusion. It found that black motorists were stopped and ticketed for seat belt violations nearly twice as often as white motorists statewide in 2014.

“When you look at the data, there are troubling patterns of significant racial disparities,” said Nusrat Choudhury, an ACLU staff attorney. “This raises a concern that racial profiling may be taking place.”

Choudhury said unlike most states, Florida requires police to collect data on the race and ethnicity of those stopped for seat belt violations, but no one had analyzed that data until her group did.

“Promoting seat belt use is important to public safety,” Choudhury said. “But it should be done fairly and without bias. That’s frequently not the case.”