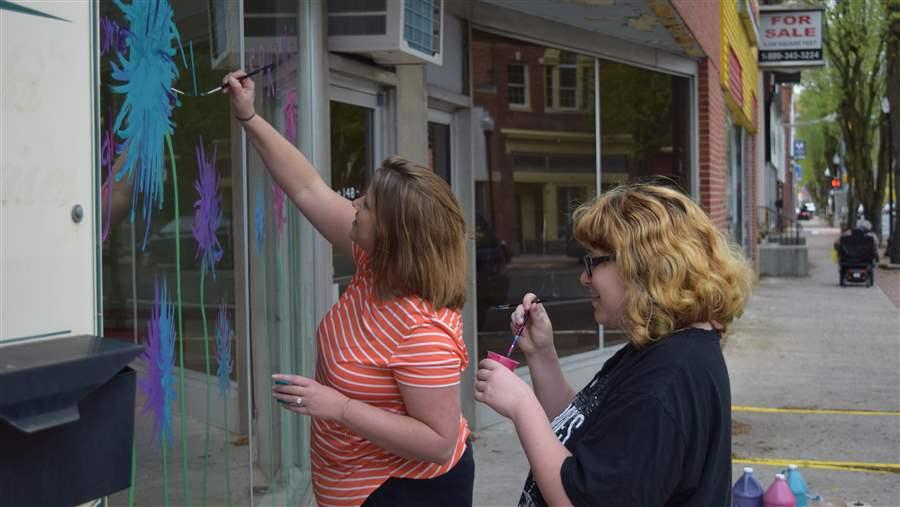 Pocomoke High School teacher Brooke Gillespie and senior Rebeka Kline, who plans to study art at a local community college, decorate vacant storefronts in rural Pocomoke City, Maryland, as part of an after-school program to teach job skills. “After they graduate, there isn’t much here” for young people looking for jobs, Gillespie said.

POCOMOKE CITY, Md. — Large numbers of young people who aren’t in school and don’t have a job used to be a problem that mostly afflicted America’s cities. But the share of “disconnected youth” in rural areas has soared over the past five years, overtaking the rate in urban areas and forcing state and local officials to look for new ways to help young people stay in school and get jobs.

Here in rural Worcester County, Maryland, a popular summer destination that includes Ocean City and other beach resorts, almost 25 percent of people 16 to 24 are unemployed and out of school, according to a recent state report.

That’s the highest rate in the state, higher even than in Baltimore, where about 20 percent of young people are disconnected. And it’s being felt hard in this quaint small town, where good seasonal jobs are 40 miles away and the nearest job-training program is about 25 miles away.

“Traditionally the perception has been that this is happening in urban areas and that’s where the funding and the research has taken place,” said Christina Church, a policy analyst in the Maryland Governor’s Office for Children. Areas like Worcester and nearby Caroline counties “have in some ways fallen through the cracks,” she said.

Nationwide, 4.9 million youth in all kinds of communities are disconnected, according to Measure of America, part of the nonprofit Social Science Research Council. Disconnected youth cost taxpayers as much as $93 billion a year in lost revenue and increased social service spending, according to Opportunity Nation, a coalition of nonprofits.

About 20 percent of young people in extremely rural areas — those like Worcester County with no cities larger than 10,000 people — were jobless and not in school, on average, over a five-year period, from 2010 to 2014, Measure of America said in a March report. That’s much higher than the rate for counties in urban centers (about 14 percent) or for suburban counties (12 percent).

“These vulnerable young people are cut off from the people, institutions, and experiences that would otherwise help them develop the knowledge, skills, maturity, and sense of purpose required to live rewarding lives as adults,” the Measure of America report concluded. “And the negative effects of youth disconnection ricochet across the economy, the social sector, the criminal justice system, and the political landscape, affecting us all.”

The election of President Donald Trump has drawn fresh attention to the plight of rural America.

On Wednesday, the National Governors Association called on Congress to restore funding to a federal program that provides funding to rural communities and school districts to help offset lost tax revenue from timber harvests on federal lands. Congress let the Secure Rural Schools program expire last year, and the governors said rural communities have struggled to absorb the unplanned cuts.

“We’re living now with some of the consequences of a bifurcated country,” said Patrick Carr, a Rutgers University sociologist who studies rural America. “It’s not good for America to have so many people disconnected.”

In some places, officials are taking steps to address the problem.

In California’s Silicon Valley, a partnership between Santa Clara County, the city of San Jose, and local schools and employers opened a “re-engagement center” about 18 months ago to help youth find jobs or enroll in college or high school in rural Gilroy. The distance between Gilroy and urban San Jose, about 30 miles, was an obvious problem for youth, said Nicky Ramos-Beban, interim principal for the centers.

A similar partnership called the Maine Youth Transition Collaborative is working with schools and employers to help people in foster care in rural areas stay in school or find jobs. The Connecticut Opportunity Project, in a September 2016 report, found “acute need in rural areas” of the state as well as struggling cities to help young people finish school, get jobs or both. Disconnected young people cost the state an estimated $900 million a year in uncollected taxes and spending on services and public safety, the report said.

In Maryland, Gov. Larry Hogan, a Republican, made lowering the disconnected rate a priority for the Office for Children in next year’s budget, mostly because it could save money in the long run, Church said.

“When youth reconnect with work and school, not only does spending on social services decrease, but also tax revenue and economic participation increase, which is good for the state’s bottom line,” Church said.

The Office for Children has asked counties, including Worcester, to propose plans to help solve the problem, such as dropout recovery programs, college prep courses, apprenticeships and job training. Proposals are due by the end of April to be considered for inclusion in the next state budget. 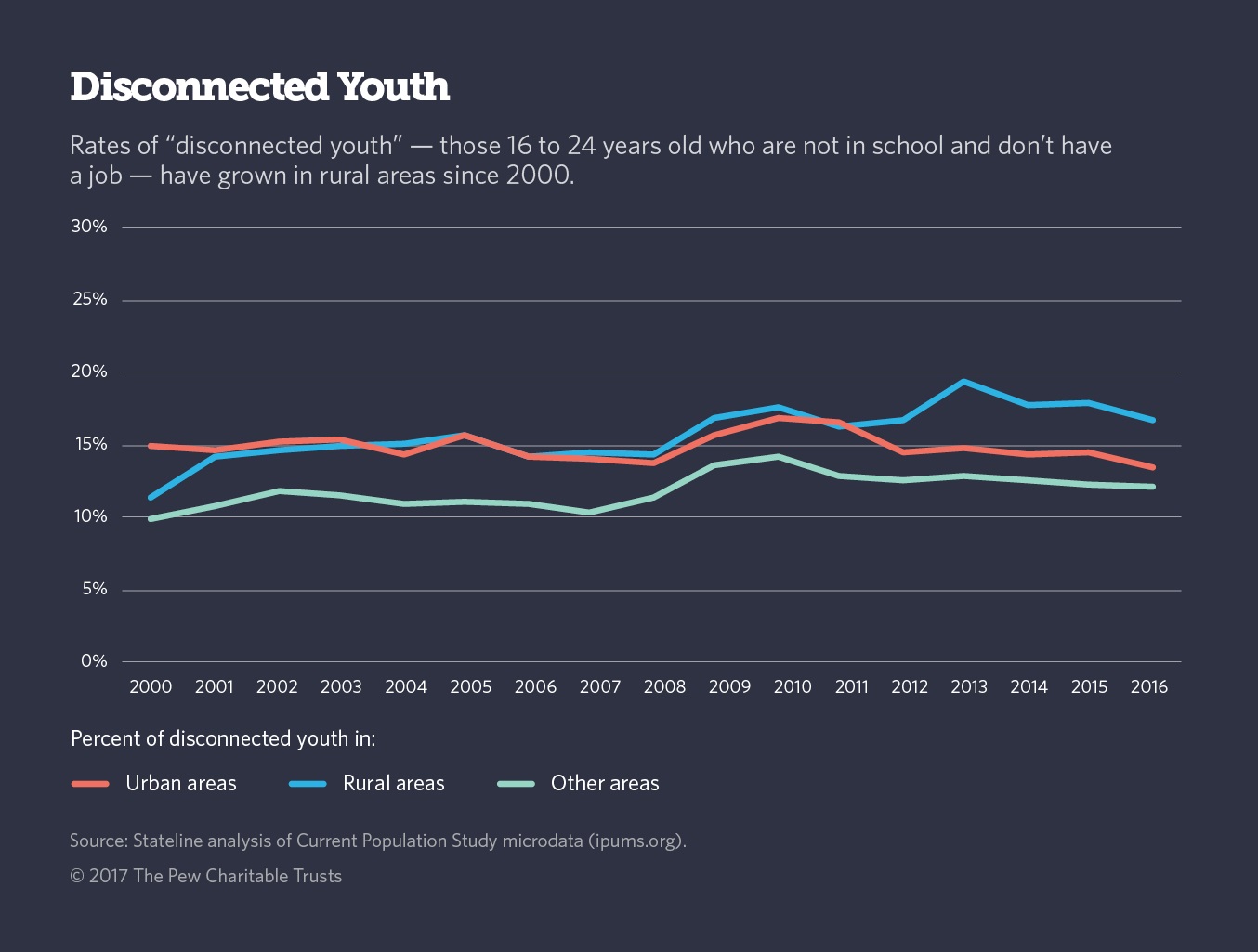 The disconnected rate reflects both education and employment, and the two factors have evolved differently in rural and urban areas. In 2000, disconnected rates were lower in rural areas than in urban areas. But since then, fortunes have reversed, according to a separate Stateline analysis of data from the U.S. Census Bureau provided by ipums.org at the University of Minnesota.

(The definition of rural areas in this data — counties that are not in areas near sizeable cities — is broader than that used by Measure of America, and includes about 13 percent of the nation’s population, compared to 6 percent under the Measure of America definition.)

The shift is due mostly to a decline in high school enrollment in rural areas after 2011, and an increase in college enrollment in urban areas over the same period. Rural employment also is a large part of the issue, as jobs in many parts of the country have failed to recover from the recession while urban jobs have bounced back and climbed from pre-recession peaks.

Schools all over rural America are contemplating changes to get some students more job skills while still in high school and to ensure that others go to college and graduate.

“It is no longer enough for schools to simply teach reading, math and science,” said Randy Watson, the Kansas education commissioner. Some students may need to spend most of their time building skills rather than on academic courses, he said.

And rural isolation can lead to limited horizons. “For many students, the only career opportunities they know are those they are exposed to within their own hometowns,” Watson said. “In smaller, rural areas these may be limited.”

For rural youth, a deep attachment to home can also make it difficult to leave to pursue opportunities elsewhere, said Richard Settersten, a professor of family science at Oregon State University.

“It has to do with their often deep connections to place, and the challenges associated with leaving those communities and navigating worlds that are sometimes so foreign from what they’ve known,” Settersten said.

‘Not Much Here for Them’

The tourist trade swells the population in the northern part of Worcester County to hundreds of thousands in the summer, as families from nearby Philadelphia and Washington, D.C., flock to the gleaming white hotels and pristine summer houses of Ocean City and nearby beach towns.

But in the south end of the county, there are many vacant, peeling storefronts and some abandoned and overgrown houses in downtown Pocomoke City. And year-round job prospects for local youth are dismal.

Jennifer Lamade, program director for the county health department, said the growing stress on the local population can be seen in the increasing number of drug- and alcohol-related deaths, which she said jumped from six in 2013 to 16 in 2015, because of increases in heroin and fentanyl overdoses. The rate of anxiety and other mental health issues has tripled since 2008, according the county’s annual health indicators report.

Lamade said the county health department is now looking for input on how to reduce the youth disconnection rate and will apply for state funds. The most likely use, she said, would be to help young people in remote areas of the county get transportation to job skills training in Salisbury, about 25 miles from Pocomoke City.

Even in summer, when Ocean City’s tourist trade is in high gear, Worcester County’s unemployment rate is higher than the state average: 5.7 to 4.4 percent last July. And the unemployment rate more than doubles in the winter months — it was 13.5 percent in January.

“After they graduate, there isn’t much here for them if they stay. They can work in Ocean City but that’s a long way away and only for a few months,” said Brooke Gillespie, a Pocomoke High School teacher who volunteers after school to help students learn job skills so they can be competitive for a shrinking number of good jobs in the area.

The county’s population has grown slightly in the last 10 years, by about 800 people between 2006 and 2016, about 2 percent, which is good by rural standards. The rural population of the U.S. dropped by about 33,000 a year since 2010, though the decrease lessened to about 4,000 in 2015, the latest year available, according to the U.S. Department of Agriculture.

But Worcester County also lost almost 1,200 jobs in construction and manufacturing in that time. Shore areas like Worcester once had thriving tomato canneries and seafood processing plants that provided work in the offseason and drew immigrants to small towns like Pocomoke, said Andrew Lazur, director of the University of Maryland’s Sea Grant program, which works with local governments on shore issues.

But it was hard, low-paid work even in its heyday in the 1970s, and much of the industry has moved overseas, Lazur said.

“The world is changing. Twenty years ago, kids liked to work part time in the summer in these oyster and crab industries,” Lazur said. “Now nobody wants that type of job anymore.”

Pocomoke City Manager Ernie Crofoot said there’s a problem with both job availability and worker availability in the southern part of the county. Young people need more and better jobs than they can get at places like the Wal-Mart on Ocean Highway, but employers often don’t see a large enough pool of potential workers.

“It’s a chicken and egg thing,” Crofoot said. The city is trying to help attract manufacturing jobs to a local industrial park, but sometimes has a hard time making a case despite high unemployment. “They ask me, ‘Where are the workers going to come from?’ ”