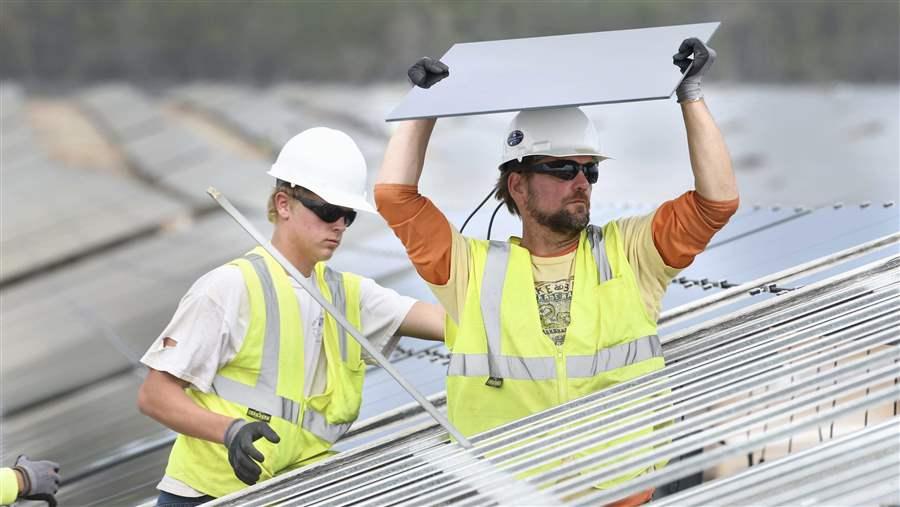 Workers install panels on a new solar energy project being built in Florida. Many states passed laws this year to encourage the use of solar power, seeing economic or environmental benefits the industry brings.

As the renewable energy industry grows and becomes less expensive, states are grappling with how to regulate the industry while ensuring fairness for both consumers and utility companies.

At least 40 states and Washington, D.C., have taken action so far this year to change utility rates, alter requirements on how utilities pay solar customers for electricity that they do not use, or set up rules for third-party financing of consumer solar installations, according to a report released Wednesday by the N.C. Clean Energy Technology Center at North Carolina State University.

Policies related to solar and other renewable energy were expected to be among the main issues addressed by legislatures this year, as the nation explores alternatives to fossil fuels.

Most of the more than 100 bills proposed in states related to solar have not passed, but a handful have, including one in Virginia that sets up a pilot program for community solar, in which many households in a community share in electricity from a single solar project.

So far, 21 states considered changes this year to net metering policies, according to the report. Net metering allows customers to feed surplus electricity they produce back onto the electrical grid for other users, and get credit on their utility bills for what they contribute.

Maine enacted a law this year that will eliminate net metering and instead require solar users to sell all of the energy they produce to an electric utility and buy it back. A similar bill passed the Indiana Legislature and is awaiting Republican Gov. Eric Holcomb’s signature.

As alternative sources for electricity generation have grown, electric utilities that maintain power lines and grids increasingly have sought rate hikes to help cover the costs. Utilities have asked regulatory commissions in 23 states for hikes for fixed charges or minimum bills for residential customers this year. Not many of the requests were approved in the first quarter, with no utility receiving its full requested increase.