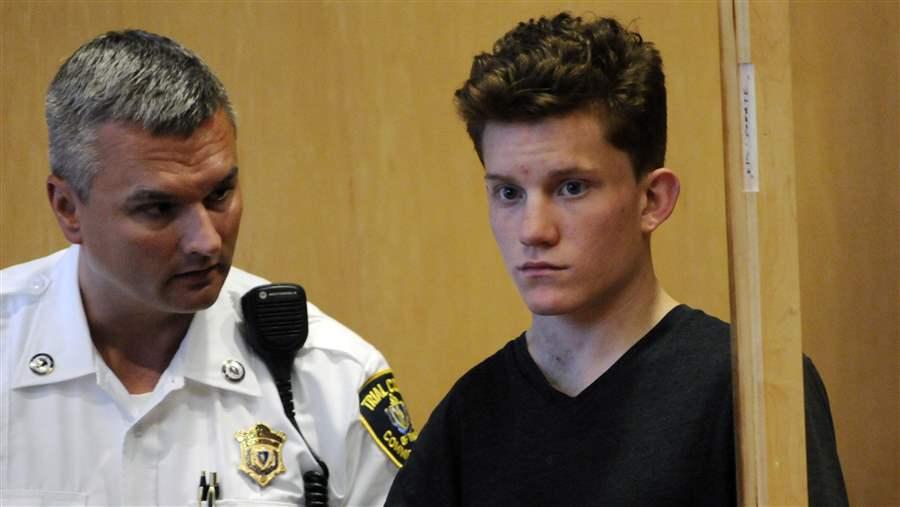 Jeremiah Remy at an arraignment in Lawrence, Massachusetts, in 2016. He was arrested after a probation violation and fleeing from police. Some states are looking at ways to reduce the time that offenders spend on probation to help them better re-enter society.

In Georgia, one in 16 adults is on probation. That’s almost four times the national average. And offenders there spend more than twice as long on probation as in the rest of the country, sometimes as long as 20 years or life. Meanwhile, probation officers juggle as many as 400 cases at a time.

The state is looking to change all that.

At the behest of Republican Gov. Nathan Deal, who has focused his efforts on revising the state’s criminal justice system, Georgia lawmakers passed a probation reform bill in March. The bill would, among other things, shorten probation sentences and reduce the caseloads of probation officers who are spread thin. If Deal signs the bill as expected, the new law will go into effect July 1.

Georgia joins several other states that are looking for ways to reduce the time that offenders spend on probation or parole, as they’ve sought to reduce sentences for lesser crimes, and reduce jail and prison overcrowding. The idea is to ease burdens on probation officers, devote resources to monitoring more dangerous offenders, help offenders re-enter society, and reduce recidivism rates.

Michigan Gov. Rick Snyder, a Republican, last month signed into law a package of bills that will, among other things, minimize punishments for “technical violations” of probation and allow judges to shorten probation time for good behavior.

Meanwhile, South Dakota, which has worked to update its probation system since 2014, last month enacted a law that allows people convicted of lesser crimes to be discharged from probation after a year for good behavior.

Minnesota lawmakers proposed bills last month that would reduce probation time for certain offenses such as misdemeanors and give courts the power to end probation terms early. Oklahoma and Louisiana have bills pending that would cut the time offenders spend on probation or parole. Since 2012, Alabama and Hawaii have shortened probation terms.

Changing probation laws is popular with many lawmakers, from fiscal conservatives worried about the rising costs of criminal justice to social justice advocates concerned that too many people are locked up. The bills typically pass with overwhelmingly bipartisan support — measures in Georgia and Michigan, for example, passed unanimously.

“It benefits the state as a whole, no matter who you are and what perspective you come from,” said Republican state Sen. John Proos, who sponsored the Michigan bill.

The moves also are favored by probation officers, who monitor people on probation or parole.

“I see this as a good thing. Shorter terms and fewer conditions for probation allow people to become more productive citizens,” said Marcus Hodges, president of the National Association of Probation Executives.

Too often, he said, people on probation are saddled with too stringent conditions, which make it more likely that they will violate the terms of their probation and end up back behind bars.

“I’ve got to ask the question, ‘Are we setting them up for failure?’ ” Hodges said. “This whole notion of the probation to prison pipeline is something that we’ve got to look at.”

Probation is different from parole. With probation, offenders are sentenced to supervision in the community, often in lieu of a jail or prison sentence, although their sentences could include time behind bars before probation sets in. With parole, an inmate is released early from prison, often for good behavior.

Most states cap the amount of time that a person can be put on probation. But in Georgia, felony probation can stretch on indefinitely, said Marissa McCall Dodson, the policy director of the Southern Center for Human Rights who helped craft the Georgia bill. That’s one of the contributing factors that make Georgia the state with the highest probation rate in the country.

Probation sentences for felony property and drug offenses average between five and 7.5 years in Georgia, according to the state Department of Community Supervision (DCS), which oversees probation and parole. In contrast, the national average for all probation sentences is three years.

The number of offenders on probation for felonies increased 23 percent between 2005 and 2015. In 2015, the state passed a misdemeanor probation law, which limits the costs of probation for people under community supervision because they can’t afford to pay fines or fees.

Georgia still treats minor traffic offenses as misdemeanors, which means that you can be sentenced to probation or jail for, say, driving too slowly in the left lane or driving with a dirty license plate. Many Georgians also are on court-ordered probation because they can’t afford to pay court fees and fines.

All of this strains the state’s already overburdened criminal justice system, overwhelming probation officers and increasing the likelihood that offenders will violate probation, McCall Dodson said.

The longer someone is on probation or parole, the more likely they are to violate its terms for something minor and end up in jail or prison, she said. In Georgia, two-thirds of the people who were imprisoned in 2015 were incarcerated because their probation or parole was revoked.

“After someone’s demonstrated their ability to lead a productive life, to continue them on probation actually has negative consequences,” McCall Dodson said.

The Georgia law will allow nonviolent offenders to earn early discharge for good behavior and grant judges more flexibility in moving probationers off of intensive supervision.

Under the new system, reducing the number of probationers will take a two-pronged approach: shorten the amount of time low-risk offenders spend on probation and make the supervision more effective. For example: providing substance abuse treatment to those who need it, and increasing contact with probation officers at the start of probation, when research shows probationers are more likely to slip up.

With a reduced caseload, probation officers can focus their efforts on high-risk offenders who need the most attention, said Racheal Borgman Peters, director of public affairs for the Georgia DCS.

The push to overhaul probation comes in the wake of efforts to reduce jail and prison populations by reducing sentences for lesser offenses and moving many offenders to probation instead of serving jail or prison time.

“Probation has been touted as a better option than incarceration, particularly for states struggling with unsustainable prison growth,” said Rebecca Silber of the Vera Institute, a research organization that advocates for changes in the criminal justice system. “But it doesn’t come without costs. And one of those costs is that probation can keep people in very serious legal jeopardy for very minor violations.”

In 2015, an estimated 4.65 million adults nationwide were on some form of probation or parole, according to the U.S. Bureau of Justice Statistics. About 43 percent were for misdemeanors.

Even so, probation is considerably less expensive than locking someone up. In Georgia, it costs about $4 a day to keep someone on probation, while incarcerating an offender costs the state $53 a day, according to the Georgia DCS.

It’s not uncommon for probation officers in some states, particularly in the South, to juggle hundreds of cases at a time, said Hodges of the probation executives group. And overworked probation officers can’t keep an eye on everyone, which means that more dangerous criminals slip through the cracks and possibly commit serious crimes.

“Putting more people on probation didn’t make us safer; it actually made us less safe,” said Joan Petersilia, co-director of the Stanford Criminal Justice Center and a leading criminologist.

One approach that states have used to reduce their probation populations is using “earned discharge,” which allows probationers to earn time off for complying with the conditions of their sentences, such as completing a drug treatment program.

Missouri started using this approach in 2012, and in three years, 36,000 probationers and parolees were able to reduce their probation terms by an average of 14 months. Caseloads dropped by 18 percent, with no increase in recidivism rates.

“It’s a smart idea to get less risky people off probation so you can watch the more risky people,” Petersilia said. “That leads to increased public safety.”

One way to do that is through using “risk assessment tools,” which work something like this: Corrections officials weigh an offender’s past criminal history, and a variety of other factors, such as employment history, age at the time of first arrest, and history of substance abuse or mental health issues, to determine how likely the offender is to commit another crime.

In 2014, South Dakota was faced with an exploding prison population — most of it fueled by offenders whose probation had been revoked, said Greg Sattizahn, South Dakota’s state court administrator. Many of the revocations were for failed drug tests, he said.

“There’s a lot of people who just churn through the system. You can never make any headway with them,” Sattizahn said.

South Dakota decided to respond by increasing its probation population in order to divert people from prison. The idea was that people would have better outcomes under community supervision. So the state reclassified certain low-level, nonviolent crimes such as drug offenses and property crimes, allowing offenders convicted of those crimes to get automatic probation, rather than a prison sentence.

Meanwhile, the state reduced the maximum probation term for those crimes while beefing up resources for probationers. Probationers who fail a drug test or don’t show up for an appointment with their probation officer face a series of sanctions that increase in severity.

As a result, the felony probation population increased by 20 percent, Sattizahn said. The state also began experimenting with earned discharge for probationers.

With probation reforms, Sattizahn said, “you have to do it the right way, so that people understand probation isn’t just a slap on the wrist. It’s not being soft. It’s about trying to reform the offender so they’re not going back to prison.”