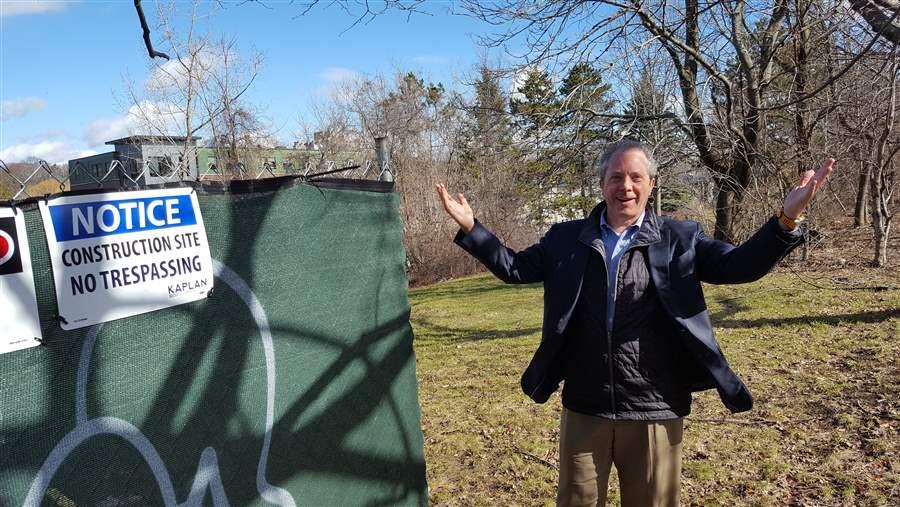 Bart Mitchell, who coordinates affordable housing projects in Boston, gestures to an empty lot where a new project is to be built. Financing for the project was thrown into disarray by the prospect of lower federal corporate tax rates.

BOSTON — The planned A.O. Flats housing development in this city’s Jamaica Plain neighborhood was billed as an oasis for low- and middle-income families, a place where they could get affordable housing in an increasingly affluent area.

Financing was nearly in place and construction was set to begin until President Donald Trump and Congress started talking right after the election about delivering the biggest overhaul of the federal tax code in more than 30 years. Those plans include simplifying tax law as well as cutting taxes, especially for the better-off and for corporations.

Suddenly, because of the proposed slash in corporate tax rates, federal low-income housing tax credits, the key to financing almost every affordable housing project in the nation, looked like they might be worth less to investors. If the corporate tax rate, now at 35 percent, is cut to 20 or even 15 percent, the credits would not be as attractive to investors who use them to lower their tax liability in return for financing housing projects.

“Investors paused and said, ‘Wait a minute, if I’m getting a stream of tax deductions at a tax rate of 35 percent now, and I’m pretty confident the rate is going to be lower … I’m going to hold off here and figure out what’s going on,’ ” said Bart Mitchell, CEO of the Community Builders Inc., a nonprofit that coordinates low-income housing projects, including A.O. Flats.

The group was able to hold on to most of its investors, Mitchell said. But they invested less — about $700,000 less — than originally planned, which forced the group to scramble to make up that amount. It did, and construction on A. O. Flats is about to get underway, but six months later than planned.

What Mitchell experienced here is indicative of how mere talk of deep cuts in the federal corporate tax rate, even in the absence of any action, is shaking up the nation’s low-income housing construction market. Investors are scaling back their financial commitments, prompting cities and states to come up with their own money to finance construction. And the situation is unlikely to ease until Congress and the White House agree on how, or if, the tax code will change.

Mitchell’s group had to negotiate a reduction in construction costs, pour in more of its own money, and hit up the state’s housing authority, the Massachusetts Housing Financial Agency, to subsidize the middle-income housing units in the A.O. Flats project, leaving enough funds to subsidize the low-income units in the project.

“Our ability to come in and subsidize the middle-income units helped allow this to go forward,” said Tim Sullivan, director of the state Housing Financial Agency.

The low-income housing tax credit is the most important resource for creating affordable housing in the nation. The federal government gives states and localities the equivalent of nearly $8 billion in annual budget authority to issue tax credits to investors and developers who finance construction or rehabilitation of rental housing for low-income households.

An annual average of more than 1,420 projects and 107,000 units were acquired, built or rehabilitated through the credit over the last 20 years.

Although states and localities often have their own mechanisms, including state tax credits, to stimulate construction, eliminating the federal tax credit or reducing its value by cutting corporate rates would be a major blow to efforts to ease the affordable housing crunch in many parts of the nation.

The federal credit provides benefits to cities, states, investors and renters. The investors’ contribution subsidizes the rent charged for the units, which allows local housing agencies to lease them at below-market rates that middle- or low-income people can afford.

It is one of many credits in the tax code that subsidize parts of the economy or promote behaviors that the federal government considers worthwhile, such as the earned income tax credit for the working poor or the credit for purchasing energy-efficient appliances.

Tax experts say that if the housing credits were reduced, eliminated or made less valuable in a tax overhaul, the government would have to find another way to encourage investment if it still wanted to boost construction of affordable housing.

Todd Crow, chairman of the board of the national Affordable Housing Tax Credit Coalition of investors, lenders, developers and others in the industry, said his members have little worry that Congress will do away with the tax credit. But lowering the corporate tax rate, which would make the credit less valuable, is a concern.

Crow, who is also a manager of tax credit capital for PNC Real Estate, acknowledged investors are re-examining what commitments they would want to make if the marginal corporate tax rate is dropped as low as 15 percent as President Trump has suggested.

“The market has reassessed,” he said. “It’s not so much that investors have gone to the sidelines, it’s that they have changed their view of the pricing. They are making sure that these investments still make sense at a lower marginal tax rate.”

Perhaps no project illustrates the effect of the nervousness in the low-income housing tax credit market like the $50 million Bedford Greenhouse development in the Bronx, New York.

Mitchell Netburn, who heads Project Renewal, the nonprofit that is spearheading the low-income housing project, said the 208-unit rehabilitation of an old building was ready for financing at a price of about $1.15 to $1.18 per tax credit before the November election. Investors would “buy” the credits by investing in the project. But the election changed things.

“They are still looking to buy them, but at a lower rate” of about $1.05, he said. “When you are talking millions of dollars of tax credits, that difference adds up.”

The project faces a $2 million shortfall. The group is cutting costs, but it is also looking to the state, the city and private foundations to make up some of the lost investment.

“The state doesn’t have unlimited resources,” he said. “When each project costs a little more, at the end of the day, it may mean fewer projects get built.”

In Pittsburgh, the planned $16 million Oakland Affordable Living Development, which would provide 49 housing units in the academic and medical center of the city, found itself in a similar situation late last year.

“We lost our first investor after the election,” said Elly Fisher, assistant director of the Oakland Planning and Development Corporation. “We got a new investor at a significantly lower price.”

That left a $500,000 hole in the project’s budget. Fisher said the state is making up $400,000 of the shortfall and the development corporation will make up the rest. But as a result, another project the group has underway will be delayed.

No state faces an affordable housing crunch like California, where rent can eat up more than half of poor people’s income. The Legislature there is looking at 130 bills aimed at tackling the problem.

The loss in value of the federal tax credit only makes financing solutions more difficult, as the Skid Row Housing Trust in Los Angeles found. The trust is grappling in Los Angeles County with a shortage of 551,807 rental homes for four-person households that have less than $41,500 in income and a homeless population of 47,000.

The trust had to build in an adjustment to a potential drop in the price of tax credits it was offering to finance two projects, the Simone Apartments and Skid Row Central, both with 113 units in downtown Los Angeles.

It is seeking a commitment from the California Department of Housing and Community Development to cover any potential funding gap, which could be as much as $950,000 for the Simone project and $500,000 for the Central project.

“Hundreds of thousands of [low income] units need to be built to try and make housing affordable across all income levels in the state,” said Ben Rosen, real estate director for the trust.

And any devaluation in the federal tax credit caused by the overhaul in federal tax rates will only exacerbate California’s problem, he said.