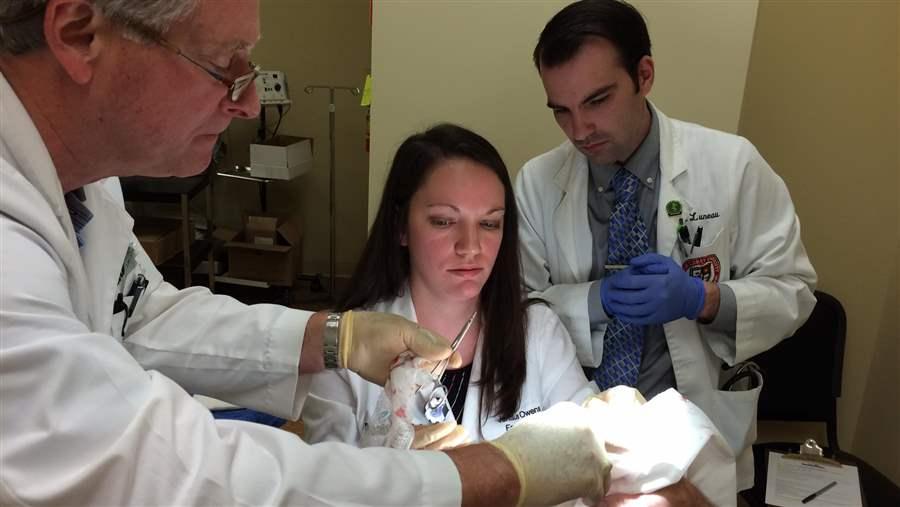 Jenisus Owens (center), a first-year medical resident in rural Meridian, Mississippi, learns how to stitch a hand wound. Rural residency programs across the country may lose federal funding on Oct. 1.

Editor's note: This story has been updated to provide correct information about the amount of money dispensed to the Teaching Health Center Graduate Medical Education program. The information the Health Resources and Services Administration initially provided to Stateline was incorrect.

In nearly two years as a medical resident in Meridian, Mississippi, Dr. John Thames has treated car-wreck victims, people with chest pains and malnourished infants. Patients have arrived with lacerations, with burns, or in a disoriented fog after discontinuing their psychiatric medications.

Thames, a small-town Mississippi native, said the East Central Mississippi HealthNet Rural Family Medicine Residency Program has been “exactly what I was looking for.”

Unlike the vast majority of doctors, Thames sought a residency in a rural clinic instead of in a teaching hospital because his ambition is to practice in the sort of place where he grew up, where doctors are scarce. He wants to be able to handle anything that comes through the door, from infections to gunshot wounds to a woman who might deliver a baby any second.

But budget decisions in faraway Washington, D.C., may make it more difficult for Thames and other doctors who want to practice in small towns or underserved cities.

Under the Teaching Health Center Graduate Medical Education program, which is part of the Affordable Care Act, the federal government dispenses grants to community health centers to train medical residents. The goal of the program is to address the shortage of primary care physicians in rural and poor urban areas.

But under current law, the federal government will stop funding the program, which serves nearly 750 primary care residents in 27 states and Washington, D.C., at the end of September. Without congressional action, it might be shut down. 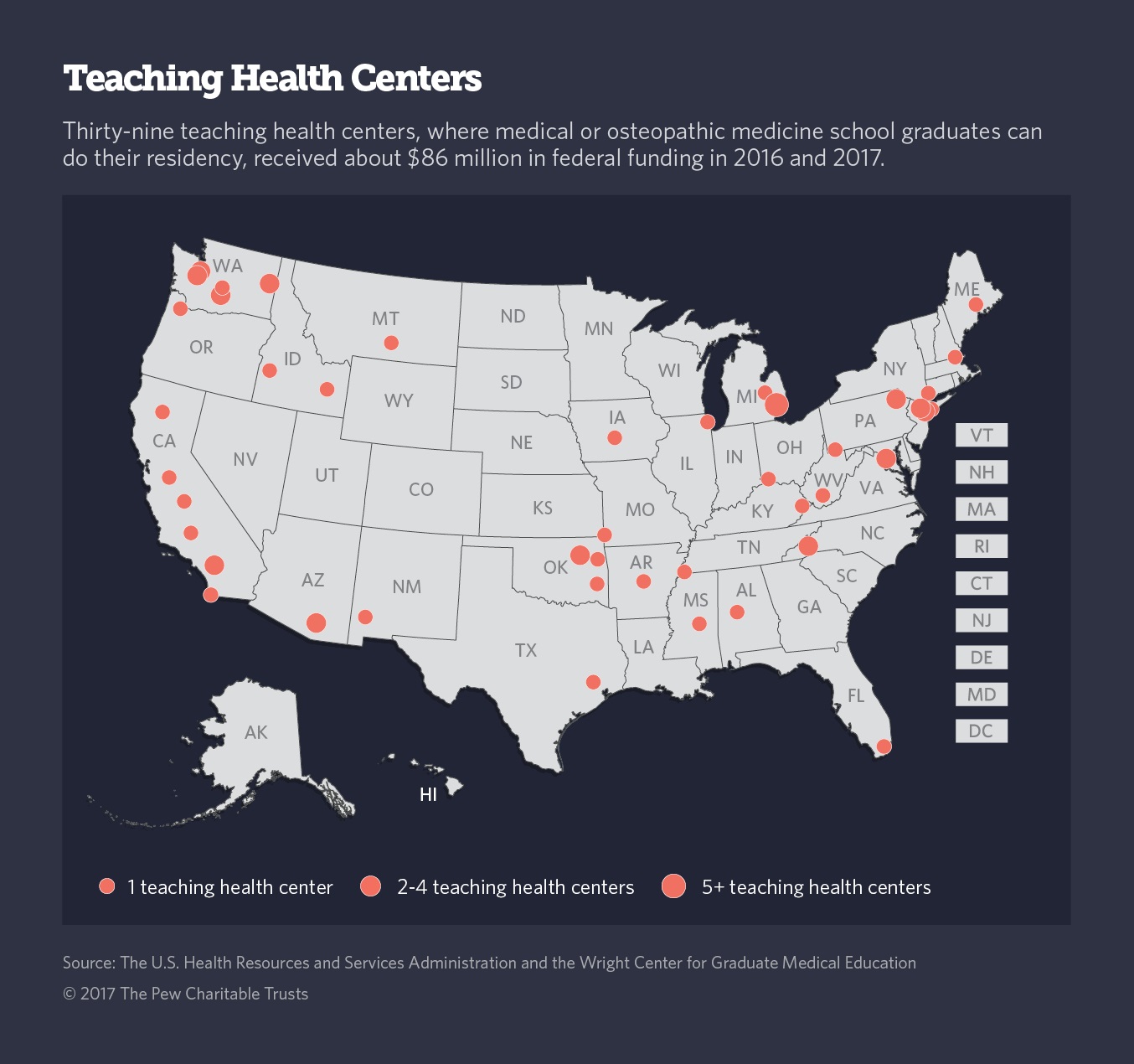 “The program is absolutely doing what it is designed to do, which is to put doctors in underserved areas like ours,” said Darrick Nelson, the director of Hidalgo Medical Services’ teaching health center program, which is training six residents in Lordsburg, New Mexico.

The teaching health centers have received bipartisan support in the past. But supporters worry that because the program is new, relatively small, and not as well-known as other federally funded doctor training programs, it might fall through the federal budgetary cracks.

“The greatest threat to the teaching health centers is the dysfunction in Washington,” said Dan Hawkins, a vice president at the National Association of Community Health Centers, a research and advocacy group.

Bipartisan support didn’t protect the program from earlier cuts. In 2010, Congress allocated $230 million over five years. When it approved a two-year extension in 2015, it provided $60 million a year which, because of growth in the program, resulted in a reduction in the level of support per resident. That reduction was enough to cause some of the teaching health centers to train fewer residents. Some have closed.

Studies have found that most physicians end up practicing close to where they did their residencies. But most teaching hospitals are located in urban centers, far from rural regions with acute doctor shortages. Poor urban neighborhoods also have difficulty attracting physicians.

The American Association of Teaching Health Centers, a nonprofit advocacy group, said the ACA residency program is having the intended result. According to the organization, 55 percent of teaching health center graduates practice in underserved areas, compared to 26 percent of those who graduate from hospital-based residencies.

“The program is doing exactly what we wanted it to do,” said John Sealey, director of medical education for Authority Health in Detroit. More than 60 percent of residents who graduated from teaching health centers in Detroit go on to practice in medically underserved areas, many of them in Michigan, he said.

RiverStone Health, a health care provider in Billings, Montana, was a teaching health center even before the federal program began. RiverStone started training residents in 1998, after partnering with two local hospitals.

“The state was completely reliant on recruiting from other areas, which was clearly not working as well as it should,” said Roxanne Fahrenwald, a RiverStone vice president. Fifty-one out of 56 Montana counties have shortages of primary care doctors, according to the federal government.

With the federal money awarded to it under the ACA, RiverStone has been able to add one medical resident a year to its program, bringing its number of residents to 24. About 70 percent of RiverStone graduates have remained in the state.

Supporters also argue that teaching health centers expose residents to the types of ailments and health disparities, such as higher rates of obesity, diabetes and heart disease, that they are likely to encounter if they practice primary care in underserved areas.

“In a community health center, most of the patients are going to present with conditions or ailments more common to a primary care practice, whereas those in the hospital will be sicker, with more acute needs,” said Shawn Martin, a vice president at the American Academy of Family Physicians.

The residents in teaching health centers do spend some of their time training in hospitals. They must complete hospital rotations in surgery, inpatient care, obstetrics and gynecology.

Those receiving care at such sites would bear the brunt of the impact if federal money for the health center residency program disappears.

“I’m very nervous,” said Eleni O’Donovan, director of the teaching health center program at Unity. “The program is not sustainable without that funding.”