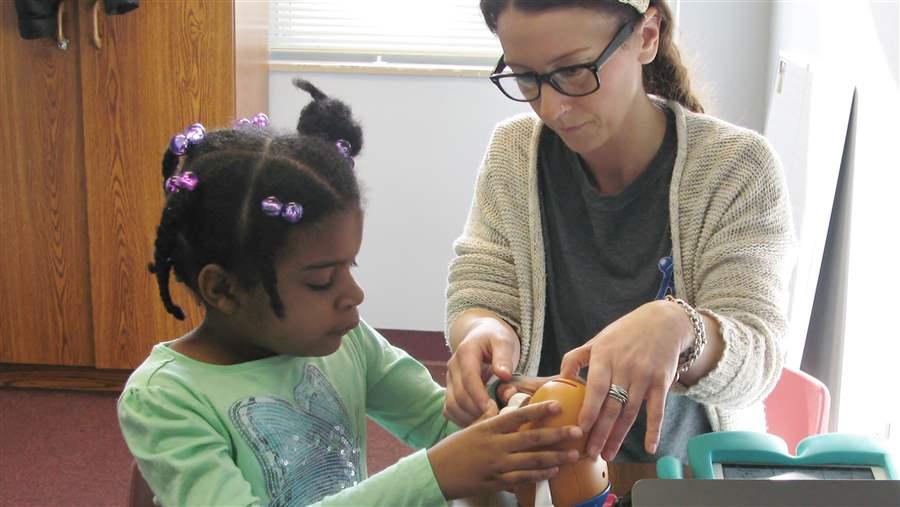 At the Autism Academy of South Carolina in Columbia, Kristen Bettencourt helps Brooke Sharpe assemble a Mr. Potato Head. Alabama is one of just five states that do not cover behavior analysis treatment for children with autism.

A bill working its way through the Alabama Legislature would require most private insurers to cover a type of therapy proven to help children with autism learn new skills and develop good behaviors.

Alabama is one of just five states with no requirement that insurance companies cover the therapy, called applied behavior analysis. House lawmakers unanimously approved a bill Friday that would require insurance plans for large companies and insurance plans administered or offered by the state government to cover many types of autism treatment, including applied behavior analysis, with caps based on a child’s age. The bill now heads to a Senate committee.

While nearly all states require the treatment to be covered, coverage varies dramatically among states and families can still have a hard time getting it. In many states, the law does not require insurance plans for small businesses to cover the treatment. In addition, some states only mandate coverage for public health plans, not for private plans.

The caps on how much treatment a child can receive each year also vary by state. In Alabama, children 9 years old and younger would be insured for up to $40,000 in treatment per year. That coverage would decrease to $10,000 per year by age 19.

Oklahoma became the 45th state to mandate coverage for the treatment last year.