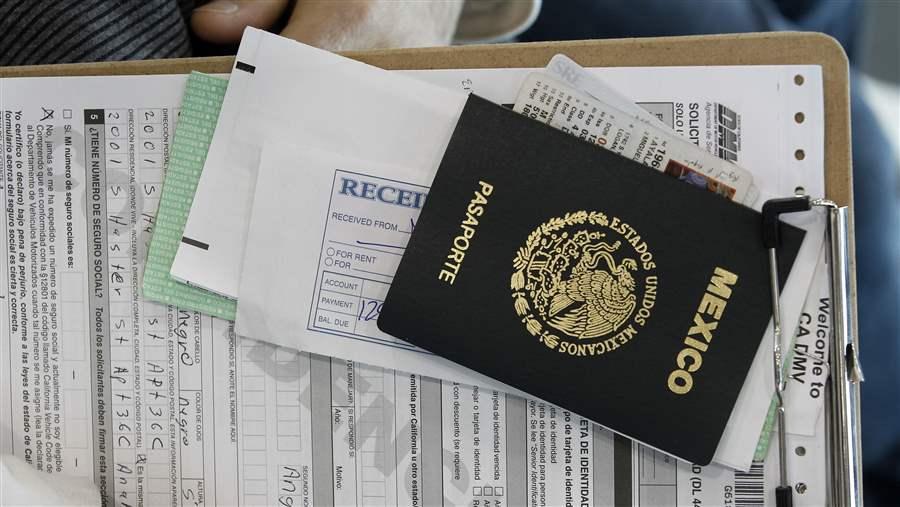 An immigrant holds personal documents needed to register for a special California driver’s license. Many unauthorized immigrants now worry that any information they provide states and localities could be used to deport them.

In the face of stepped-up deportation efforts, many unauthorized immigrants worry that state and local programs that are designed to help them could instead be used by federal agents to identify and expel them from the country.

About a dozen states have created special driver’s license programs for people who can’t prove U.S. citizenship, and more than a dozen cities have started identification programs so that unauthorized immigrants and others can complete tasks such as opening bank accounts, enrolling their children in school and receiving government services.

Under the programs, most of which were created in the last five years, state and local government agencies have reviewed and perhaps retained millions of documents with personal information about the applicants, such as their names, addresses and foreign identification numbers. Although there has always been a risk that U.S. Immigration and Customs Enforcement (ICE) could request the documents, immigration advocates say the information could be more vulnerable now, in a political atmosphere that is increasingly hostile to immigrants.

Fear is growing in immigrant communities that the federal government might try to obtain the information from local governments, said Emily Tucker, a senior staff attorney at the Center for Popular Democracy, which backs the expansion of municipal ID programs and seeks to help unauthorized immigrants facing deportation.

To try to ease the fear, lawmakers in states such as Hawaii, Massachusetts and Vermont have pushed various measures to prevent state and local resources from being used to enforce federal immigration law. In Vermont, Republican Gov. Phil Scott signed a law requiring local governments to get approval from the governor before assisting federal enforcement. In Washington state, Democratic Gov. Jay Inslee issued an order saying state agencies will not collect information on immigrants beyond what is necessary to perform agency duties and will not use resources to apprehend people for being in the country illegally, except as required by law.

Concerns over how information will be used are playing out in New York City, which has the largest municipal ID program in the country, serving more than 1 million residents.

The city denied a request for copies of application documents from two Republican state lawmakers. The Assembly members, Ron Castorina and Nicole Malliotakis, then sued the city when it decided to move forward with destroying the documents as it had planned. A New York Supreme Court justice ruled earlier this month that the city can destroy the documents. The lawmakers plan to appeal the decision, their attorney said.

The lawmakers said that they wanted the documents “to carry out legitimate governmental and public interests,” according to the judge’s ruling. The lawmakers did not respond to a request to elaborate.

The growing concern over stepped-up enforcement has caused cities that were considering starting municipal ID programs to hold off or proceed more carefully, Tucker said.

Tucker said that while it’s not likely ICE would be able to get hold of a list of cardholders, the perception that it might be able to is enough to make a program not work. The success of a program depends on high participation rates, she said.

Matthew O’Brien, research director for the Federation for American Immigration Reform, a national organization that advocates halting illegal immigration, said the federal government legally can — and should — try to get any information it can from state and local governments as part of its investigations.

O’Brien said unauthorized immigrants should not be given access to public benefits such as driver’s licenses in the first place. But if the programs are created, he said, immigrants who apply should know the risks.

Local school districts also collect information on children, and states must provide free public education to all children regardless of their immigration status, in accordance with a 1982 U.S. Supreme Court ruling. About 20 states also allow unauthorized immigrants who are residents to pay in-state tuition at public colleges and universities under certain conditions. But federal law largely bars the schools from handing over most private student data without the student’s consent, a subpoena or a court order.

At the local level, about 15 cities have created municipal IDs as a way to “make life easier” for undocumented immigrants, Tucker said. “If you’re a citizen, you don’t think about what a privilege it is to have an ID or how often you need it.”

Documents that cities require to prove identity and residency under the programs include birth certificates, foreign identification documents, passports or utility bills. Under most programs, cities are prohibited from copying or retaining documents. City officials must simply review them and give them back, Tucker said.

New York City’s was one of just a few city programs under which documents were retained. Under a December rule change, the New York program will no longer do so.

As other cities consider creating programs, Tucker suggests that they follow the same practice. And applications should only ask for the information needed to administer the program, Tucker said. “ICE can’t get data that you don’t keep.”

Philadelphia has been studying whether to create a program since last year, when Councilwoman Maria Quiñones-Sánchez submitted a bill. Quiñones-Sánchez said the program would provide a unified way for residents to access all city services that require identification, including health care, public safety and libraries.

But Miriam Enriquez, director of Philadelphia’s Office of Immigrant Affairs, said her concerns about protecting the privacy of applicants are even greater under the Trump administration. “There is so much anti-immigrant sentiment across the country and throughout the state right now.”

The city plans to study what other cities have done to address privacy concerns before moving forward, she said.

Another way to increase the privacy of immigrants, Tucker said, is to get the general public to sign up for the IDs by offering various benefits to cardholders.

New York’s ID card gives free memberships and discounts at cultural institutions, said Rosemary Boeglin, spokeswoman for the Mayor’s Office of Immigrant Affairs. The program has never asked for or recorded information on immigration status, Boeglin said, and it has always been very confident in its ability to protect cardholder privacy.

The New York Civil Liberties Union did not support the program when documents were being retained, but now it does, said Johanna Miller, the organization’s advocacy director.

“As a privacy organization, one of the things we are constantly fighting against is unnecessary databases that could expose people,” Miller said. “This was just a textbook example of that.”

But some think it’s crucial to keep the documents. In testimony to the Supreme Court, Edward Mullins, a sergeant with the New York City Police Department and the president of the Sergeants Benevolent Association, the union for city police sergeants, said that the city’s decision to not retain backup documentation limits the ability of police to investigate crimes, particularly crimes involving undocumented immigrants.

In those cases, his testimony said, the documents could assist law enforcement in locating a suspect by “tracing previous addresses or family, which could be found in birth certificates, passports or residency documents.”

ICE uses information from state motor vehicle departments to confirm someone’s identity or to locate them. But Bennett said those efforts are targeted at certain individuals, including those who pose a threat to public safety or national security, or those who are wanted for criminal or immigration charges. And while the agency has made requests for bulk data in the past, it “found it to not be an effective way to do things.”

States created the special driver’s license programs to benefit unauthorized immigrants, but also in an attempt to make the roads safer. The documents retained under the programs and the confidentiality protections built into the laws vary by state, said Tanya Broder, a senior staff attorney with the National Immigration Law Center, which advocates for immigrants.

California has the largest driver’s license program. It has issued 865,000 licenses under the program, which began in January 2015. It keeps proof of identity and residency documents for 13 years, according to Jessica Gonzalez, spokeswoman for the California Department of Motor Vehicles.

The state has not received any requests from ICE to provide any documents submitted under the programs, such as birth certificates and passports, Gonzalez said. The state won’t provide copies to any external entity, she said, except as required to by law, such as under a court order.

Illinois also offers a driver’s license available to those without proof of U.S. residency. If the secretary of state’s office, which administers the program, received a legally valid request from a federal agency for information regarding undocumented cardholders, the information would be provided, according to a state document. Other states have said that they would only provide the information if they were subpoenaed.

The National Immigration Law Center has found that no federal policy governs how and when ICE obtains information from motor vehicle departments, although it has found instances in which ICE field offices have made bulk requests for information. In Atlanta, for instance, the field office planned to attempt to “gain access to any temporary driver licenses issued to foreign born applicants for possible leads” in an attempt to apprehend unauthorized immigrants with criminal warrants.

Because it is still unclear what ICE’s priorities in identifying and deporting unauthorized immigrants will be under the Trump administration, Broder said all driver’s license applicants who are not in the country legally need to weigh the benefits of getting a license, which would prevent them from getting cited for not having one, against the risk of being easier to locate.

So far, ICE spokeswoman Bennett said, the agency’s priorities have not changed. It prioritizes finding and deporting unauthorized immigrants who pose a threat to national security or public safety, including those who are wanted on criminal or immigration charges.

“People like to make a lot of allegations about things that have changed from one administration to the next,” she said. “But we continue to be a law enforcement agency that continues to have priorities and do things in a way that is targeted and lead-driven, and that has not changed.”