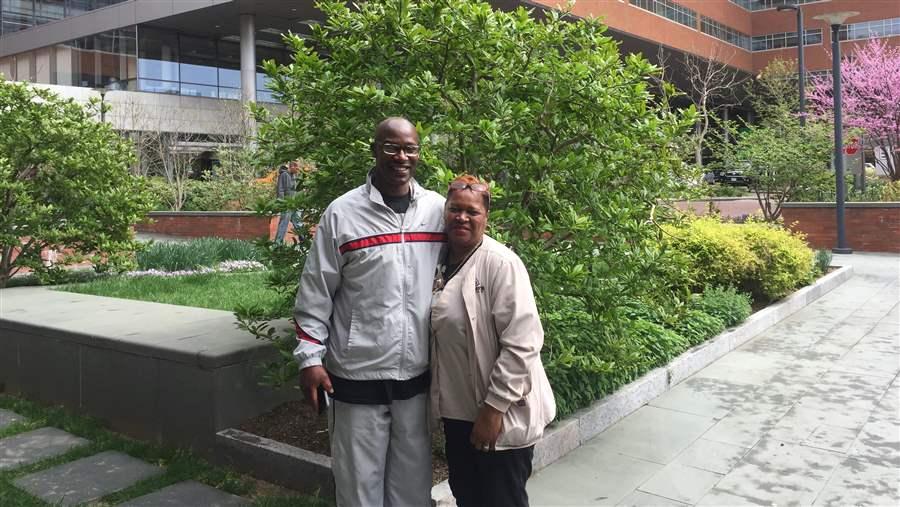 William Glover-Bey and Collie Thomas pose outside the Johns Hopkins Hospital in Baltimore. They are alumni of Turnaround Tuesday, a nonprofit program that helps ex-offenders find jobs.

BALTIMORE — Collie Thomas sat in the courtyard outside the Johns Hopkins Hospital and marveled at her luck. She works as an orderly in one of the most prestigious hospitals in the country. She was promoted about a year ago. She just moved into a snug new row house.

“I stayed 10 years in prison, and I worked hard in prison for like a dollar, dollar fifty — for so little,” said Thomas, 51, her bedazzled pink smartphone glinting in the April sunshine. “So when you get these kinds of jobs here, you work your best.”

With unemployment falling and workers hard to find, a growing number of health care employers are following Johns Hopkins’ lead and giving people with criminal records a second chance — hiring them mainly into entry-level jobs in food service, janitorial services and housekeeping. Studies show that employees with records stay in their jobs longer and are no more likely to commit workplace crimes than hires without them.

This year, Illinois began allowing people with some forcible felony convictions to petition for professional licenses in health care. In 2015, Pennsylvania’s Supreme Court struck down a decades-old law that had prohibited people with certain offenses — from theft to murder — from working in long-term care facilities, home care agencies or adult day centers.

But health care isn’t quite like any other business. Hospitals, nursing homes and doctor’s offices care for people in the most vulnerable moments of their lives. Citing public safety concerns, some states have gone in the opposite direction, passing laws to keep people with criminal records out of clinical jobs.

For instance, a bill in Colorado would require doctors, nurses, dentists and other health care professionals to submit a fingerprint-based background check before they can be licensed, and permits the relevant licensing boards to disqualify applicants who have been convicted of unlawful sexual behavior or diversion of controlled substances. A 2016 Indiana law expanded background checks for people who work at home health agencies. Existing state law already bars home health agencies from hiring people who have been convicted of certain crimes, such as theft or rape.

But about one in four U.S. residents has a criminal record. As the health care sector continues to add jobs, state lawmakers and health care employers will have to decide whether ex-offenders will be allowed to fill them.

Beyond ‘Ban the Box’

Johns Hopkins’ willingness to hire ex-offenders dates to the late 1990s. At that time, the economy was booming and the hospital was desperate for workers, said Michele Sedney, senior director for central recruitment services at the health system.

“That’s also around the time that we started doing background checks and we started to find, ‘Gee, there’s lots of people that have backgrounds. And if we’re going to exclude all of them — then how are we ever going to staff the hospital?’ ” she said.

Today the Johns Hopkins health system doesn’t run a background check until after a conditional offer of employment is made. If there’s a problem, a former Baltimore police officer who works in the human resources department will review the applicant’s record. HR will consider mitigating factors, such as how long ago the offense took place.

Sedney says that in the four years she’s been in her role at the health system, there has been no theft, drug diversion or other criminal incident involving an employee with a criminal record. In a five-year study of almost 500 ex-offender employees, the Johns Hopkins hospital found that ex-offenders were more likely to stay in their jobs for more than three years than non-offenders.

Other research supports the idea that people with criminal records are reliable workers. A Northwestern study of tens of thousands of hires into low-skill white collar jobs found that hires with records stayed in their jobs longer and were no more likely to get fired than hires without records.

“This evidence taken together suggests that employees with a criminal background are in fact a better pool for employers,” the study said.

The federal government put pressure on all employers to consider applicants with a criminal record in 2012, when a federal board, the Equal Employment Opportunity Commission (EEOC), warned that employers that exclude applicants because of their records may violate anti-discrimination laws. Some states and cities, including Baltimore, ban employers from asking about arrest and conviction records until late in the hiring process.

That’s not to say that hiring an ex-offender doesn’t pose risks. Employers are wary of opening themselves up to negligent hiring lawsuits. And the public blowback when someone with a criminal record commits a crime can be huge. Colorado’s proposed background check law was proposed after the Denver Post exposed the large number of nurses with criminal records working in the state.

But now that workers are once again hard to find, more health care systems are becoming open to hiring people with arrest and conviction records. Johns Hopkins has hired people with records for hard-to-fill positions such as a night shift job cleaning emergency department floors.

The Safer Foundation, a Chicago nonprofit that focuses on prisoner re-entry, is about to launch a vocational training initiative that will prepare ex-offenders for jobs in healthcare, construction and other high-demand industries. This week the foundation, along with the National Employment Law Project, is releasing a guide for health care employers looking to hire people with arrest or conviction records.

Since it began piloting the program last year, Safer has placed 35 clients in health care jobs in the Chicago area. Safer staff members address clients’ legal problems by filing paperwork to get records expunged or securing certificates of good conduct. They also connect clients with training and advise employers on how to hire and manage ex-offenders.

Emily Brown, a retention specialist at Unity Point Health in Des Moines, Iowa, said that her hospital system follows the EEOC guidance and has hired people with criminal records when the record is unrelated to the job — such as hiring people charged with driving under the influence into positions that don’t involve driving.

She says that in her experience, the employer’s attitude presents more of a barrier to hiring people with a criminal history than the law does.

Thomas, the Johns Hopkins employee, is warm and chatty and dresses up her beige uniform with purple lipstick and glittery gold nail polish. She has worked in the health care industry most of her life, as a nurse’s aide and housekeeper. In her current role, she makes sure patients’ rooms are stocked with the right supplies and helps out with other non-clinical tasks like moving patients and delivering medical records.

She doesn’t seem like someone who has been to prison — least of all for murder.

Here’s what happened, as Thomas tells it. In the early 2000s, during a fight at home with her on-again, off-again boyfriend, she grabbed a knife and waved it at him. She wanted to scare him into leaving her alone. Instead, he rushed at her. By the time the scuffle was over, a table was broken and her boyfriend had a stab wound in his chest.

“I never thought the man was going to die,” Thomas said. But later, in the hospital, he did. Her knife had punctured his lung. When she found out, she was at the police station explaining what had happened. She didn’t think to call a lawyer.

After her sentencing, Thomas requested to be sent to a prison that specialized in inmates with mental illness, because she knew she needed therapy. “My life was just shattered,” she recalled. She had struggled with drug use. One of her sons had been killed less than two years earlier. In prison, she’d be locked away from her 12-year-old daughter and college-age son.

When Thomas was released a few years ago, her daughter advised her to join a re-entry program she’d seen on Facebook, Turnaround Tuesday.

Employers often feel more comfortable hiring felons who have been vetted by a community organization or workforce intermediary. The Safer Foundation plays that role in Chicago, and Turnaround Tuesday does so in Baltimore.

Turnaround Tuesday is a nonprofit initiative that operates out of two church basements on opposite sides of the city (both groups meet on Tuesdays). It’s open to anyone who’s struggling to find work, but about two-thirds of participants have a criminal history, says Melvin Wilson, one of the program directors.

Turnaround Tuesday has a reputation for actually getting people jobs, thanks to its strong relationship with Baltimore employers. Participants learn to manage conflict, set boundaries, advocate for themselves and others, and tell their story in a way that emphasizes personal growth. They can keep showing up to the meetings for as long as they want.

After Freddie Gray died from injuries sustained while in police custody in April 2015, sparking riots that rocked Baltimore, area hospitals approached the state with a plan to increase hiring from high-poverty communities. Maryland approved $10 million in 2015 to support job creation, including over 200 jobs across four Baltimore-area health systems, including Johns Hopkins.

Turnaround Tuesday is one of the nonprofits recruiting people for jobs as community health workers, peer outreach specialists and nurses’ aides. Wilson said the great thing about the partnership is that it trains workers for jobs that are available, rather than just giving them some kind of certification and wishing them luck.

In the end, Thomas said, her incarceration “made me a much better person.” In prison, she gained new job skills and worked through the trauma of her past. At Turnaround Tuesday, she learned how to conduct herself professionally. She still goes to the meetings when she can.

Thomas is grateful for her job and plans to work hard to keep it. The truth about ex-cons, she said, leaning forward conspiratorially, is that employers can get more work out of them. “That’s why you should always give them a chance,” she said.