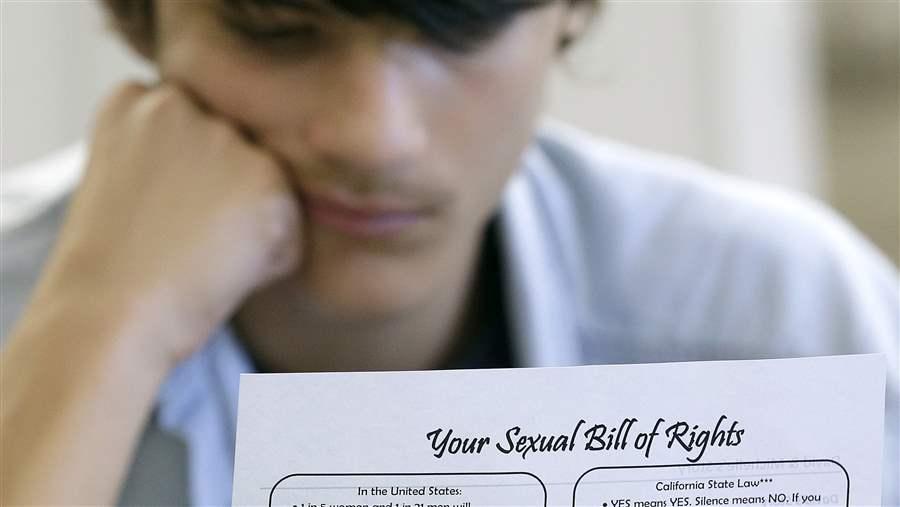 Sex education in some American high schools is evolving beyond pregnancy and disease prevention to include lessons aimed at curbing sexual assaults.

A few years ago, when Mae Gayle Dalton was in the 9th grade, her close friend was sexually assaulted by a former boyfriend on school grounds. Making matters worse, Dalton said, school administrators punished her friend more severely than the boy.

Fueled with rage, Dalton gave herself a crash course on sexual assault and the cultural forces that sometimes encourage it. And this year, as part of a Girl Scout project, she took on the task of educating her Danville, Virginia, community about what she learned.

Armed with buttons and flyers, Dalton, now a high school senior, has been camping out at local fairs, Rotary Club meetings and school board sessions, giving speeches about her cause. And she’s been pushing her state representative to support legislation that would require Virginia’s public schools to teach “yes means yes” as a standard for sexual consent.

The usual approach, which relies on teaching kids that “no means no,” isn’t enough, Dalton said. Often, when it comes to sexual activity, she said, “there is a fine line. We have to un-blur it.”

Some states agree with her. In 2015, California became the first state to require that public schools teach students what’s known as the affirmative consent standard, which requires a clear, unambiguous and voluntary agreement to participate in a specific sexual activity.

Also in March, the Maryland House of Delegates approved a measure that would require public schools to teach the “yes means yes” standard for sexual consent. (The Maryland Senate failed to advance the bill this week, effectively killing it for this year.)

Similar bills have been introduced this year in Illinois and Pennsylvania. And in February, the Nevada Youth Legislature, which has the power to pitch youth-oriented legislation to the state Legislature, introduced a bill that would, among other things, require public schools to teach students about affirmative consent.

The “yes means yes” measures don’t change the legal definition of sexual assault. They vary from state to state, but generally, “no means no” remains the legal standard for prosecuting sexual assault cases.

Victims’ rights advocates say that criterion lends itself to ambiguity because a victim who is drunk or asleep cannot say “no” or otherwise give consent. That’s why the affirmative consent bills can help prevent sexual assault, they say.

The affirmative consent bills come at a time of intense debate about sexual assault on college campuses. Over the past few years, a number of states, led by California, have passed legislation mandating public universities teach affirmative consent to their students.

But opponents of the laws, such as Harry Crouch, president of the National Coalition for Men, a men’s rights group, argue that the affirmative consent standard is overly broad and can lead to false accusations.

Crouch said that since college campuses recently started using the “yes means yes” standard, his organization has noticed an increase in calls from the parents of young men who say they’ve been falsely accused of rape.

To prevent that, he said, any legislation requiring education in affirmative consent has to include provisions to hold purported victims who lie about being assaulted accountable.

Some lawmakers, such as Del. Ariana Kelly, a Maryland Democrat who sponsored the bill there, say that changing the way we talk about sex is a good thing, especially when it comes to young people, who are particularly vulnerable to being exploited.

And one of the most effective ways to combat sexual assault among young people is to teach them about sexual consent before they hit college, she said.

“Age 18, when they show up in the dorms, is just too late,” Kelly said. “It’s easier to educate people when their opinions are forming rather than change those opinions later.”

Research shows that victims of sexual assault are often young and often know their attacker. The majority of female rape victims — 79 percent — were attacked for the first time before they turned 25; 40 percent of rape victims were under 18 when they were first assaulted. (Twenty-eight percent of male victims reported being raped for the first time when they were under 10.) And seven out of 10 rapes were committed by someone the victim knew.

Research also indicates that young victims may be more likely to be victimized again. About 35 percent of women who were raped as minors were later raped as adults, according to the Centers for Disease Control and Prevention.

Sex education advocates say teaching young people how to give and recognize consent for sexual activity can go a long way in developing healthy relationships and potentially combating sexual violence.

Schools need to offer comprehensive sex education that is medically accurate and age-appropriate, and it should teach young people how to be safe in a relationship and how to communicate about consent, said Chitra Panjabi, president and CEO of the Sexuality Information and Education Council of the United States, which advocates for sexual and reproductive health education.

The best way to do that, she said, is to start early — in kindergarten — and continue through high school.

The “yes means yes” bills have had bipartisan support in many state capitols. And some conservative groups, such as Ascend, a nonprofit that advocates for abstinence-based sex education in schools, support teaching the “yes means yes” standard in schools.

People who have been sexually abused or coerced into having sex often do not understand that they are the victims of a crime, said Mary Anne Mosack, national director of state initiatives for Ascend. With the current high rates of sex trafficking, where girls as young as 12 are lured into sex work, “there’s even more need in a classroom to make sure students understand what sexual abuse looks like,” Mosack said.

“But we don’t want to be communicating to 8th-graders that because they have consent, having sexual activity is a good idea. We always put it in the context that waiting for sex is a good idea,” she said.

The Los Angeles United School District has been incorporating the idea of affirmative consent in its sex education classes for several years, including conducting campaigns about relationship violence and sexual assault.

A 2015 survey of high school students in the district, which includes Los Angeles and Los Angeles County, found that 11 percent of girls and 6 percent of boys reported being the victims of unwanted kissing, touching or sexual intercourse with someone they were dating or had dated in the past year.

The number is likely higher because often teens don’t recognize that they have been sexually assaulted until years later, said Timothy Kordic, project adviser and manager of the HIV-AIDS prevention programs for the district.

“Females in particular believe sexual assault is their fault: ‘I got drunk; I was stupid,’ ” Kordic said. But, rape, particularly when the attacker isn’t a stranger, “happens a lot more than we’d like to think,” he said.

So the district’s sex education focuses on helping students avoid sexual assault and dating violence by teaching them to recognize risky situations and how to respond. As part of class, students practice how to handle themselves in certain situations through role-playing, Kordic said.

“Hopefully, they’ll leave with a set of skills that they’ll have for the rest of their lives.”