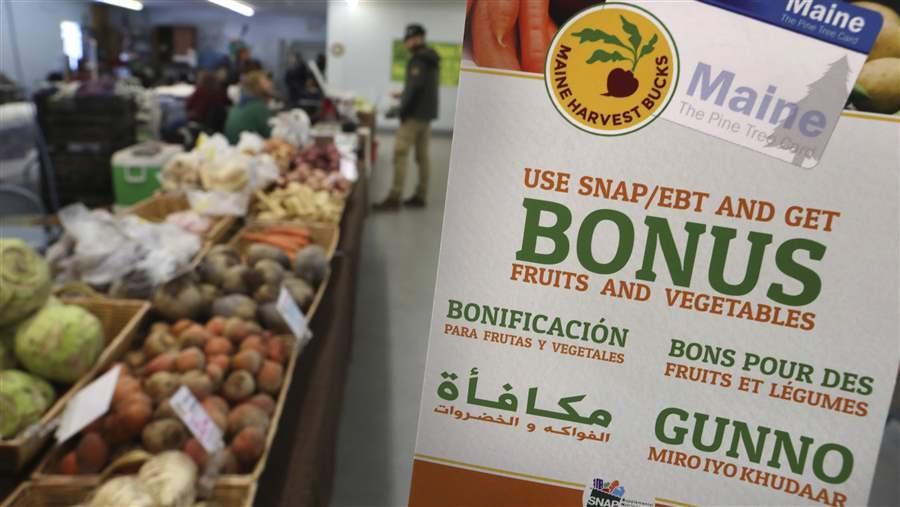 A sign advertises a program that allows food stamp recipients to use their EBT cards to shop at a farmer’s market in Topsham, Maine. The Great Recession of 2007 to 2009 and a sluggish recovery increased the number of people receiving food stamps, but most states reduced error rates even as the rolls expanded.

Virginia will repay the federal government about $7.1 million to resolve allegations that it manipulated data related to the state’s food stamp program.

Under the federal Supplemental Nutrition Assistance Program, states must submit data to the federal government about who is eligible for the program, including an error rate that represents the accuracy of the data. The Virginia Department of Social Services admitted that, from 2010 to 2014, it used improper methods to decrease the error rate it reported, according to an announcement this week from the U.S. Department of Justice.

“Today’s settlement sends a strong message regarding the Government’s commitment to work across agency lines to protect the integrity of SNAP,” said Bethanne M. Dinkins, special agent-in-charge for the U.S. Department of Agriculture’s Office of Inspector General, in the announcement.

A Stateline analysis in 2014 found that as participation in the food stamp program grew, most states reported a decline in error rates, from 8 percent in 2002 to about 3.7 percent in 2014. The USDA gives bonuses to states that report the lowest and the most improved error rates each year, and can charge fees to states with high error rates that don’t show improvement.

The Justice Department said that through its use of biased methods, Virginia was improperly awarded bonuses from 2011 to 2013. State employees were pressured by a consultant to “use whatever means necessary” to report a decision about food stamp benefits as correct, rather than admitting an error, the department said.

The USDA did a thorough review of state quality control systems in 2014 and found data quality issues in 42 of 53 states.