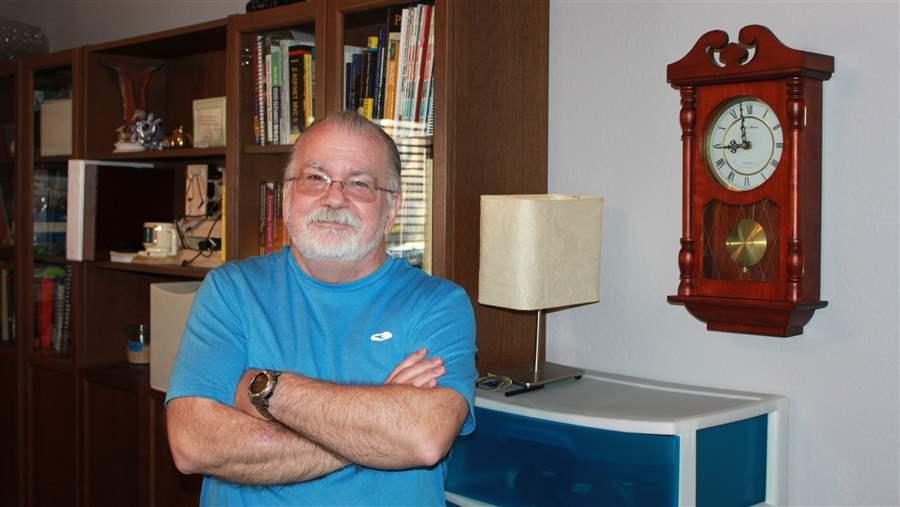 Ray Harwood is fascinated by time. The Arizona resident is one of a few hobbyists who have been tracking the movement across the country to abolish daylight saving time, or keep it year-round.

AVONDALE, Arizona — In every room of his stucco two-story house in this Phoenix suburb, Ray Harwood has a clock, or two or three — digital, satellite or with a pendulum. He keeps the time on his wrist, on counters, desks and walls, and even on his bedroom ceiling.

Harwood, 63, has a slight obsession with time and an opinion that we should stop messing with it.

He lives in one of the two states — the other is Hawaii — that don’t change their clocks twice a year for daylight saving time. And Harwood has started to wonder why other states do. In the last few years, he has become one of just a few hobbyists who are tracking the movement in states to either abolish daylight saving time or stay on it year-round.

The movement to “lock the clock” is growing as more research indicates that the biannual ritual of changing the time is not only annoying to some but harmful to public health, productivity and safety. This year, about half of states have considered or are considering time-related bills.

Bills to abolish daylight saving time have been introduced for years, and have always faced opposition, including from sport and retail industries that say the extra hour of evening sun in the summer brings them more business.

But in the past few years, more states are considering another idea: If everyone likes evening sunlight, why not stay on daylight saving time year-round? Bills have been introduced this year in at least six states — including Connecticut, Illinois, Michigan, Mississippi, New Mexico and Wyoming — that would effectively move the states to the next time zone to the east.

Under federal law, all states that choose to participate in daylight saving time must do so on the schedule set by the federal government, moving an hour ahead on the second Sunday in March and moving an hour back on the first Sunday in November.

If a state wants to be on daylight saving time year-round, it needs to change time zones. To do this, a state would need to ask Congress to approve a law, or ask the U.S. Secretary of Transportation for permission. Then, the state would opt out of daylight saving time and stay on the new schedule year-round. On both coasts this year, state lawmakers say they want to team up with lawmakers in other states to ask the federal government for approval.

Some lawmakers who have proposed bills, such as Republican state Rep. Peter Lucido in Michigan, say they don’t care which way their states go, as long as they stop changing the clocks. After Lucido’s bill to abolish daylight saving time faced opposition, he changed it to keep it in place year-round.

“I said either way you want to go, I’m fine with it. But let’s keep the clocks locked,” he said. “Set it and forget it.”

But other researchers have found that it doesn’t. And more people have started questioning the ritual in the last decade as studies have indicated that changing the clocks coincides with negative health effects such as increases in heart attacks and strokes.

The time change in the fall reduces the amount of sleep people get overnight on that Saturday by an average of 40 minutes, which affects behavior the following Monday, according to research co-authored by Christopher Barnes, an associate professor of management at the University of Washington. The loss of sleep does not equal a full hour because the data included the two states that do not participate in daylight saving time, and because some people may change their sleeping habits because of the time change, Barnes said.

Barnes said studies he has co-authored have found that on “Sleepy Monday,” work injuries increase, time spent browsing the internet while at work increases, and peoples’ ability to be aware of the decisions they are making drops. In his latest study, he found that judges hand out stricter sentences on that Monday — something he says signals that the change makes people “more emotionally reactive.”

“It wreaks havoc on all sorts of issues,” he said.

Similarly, Austin Smith, an economist at Miami University in Ohio, found in a study last year that fatal car crashes increase by 5 to 6.5 percent in the days immediately following the change.

There are some firm believers in the benefits of daylight saving time, such as David Prerau, author of the 2005 book “Seize the Daylight.” But while he supports it, he said people wouldn’t like having it year-round.

In 1974, the federal government temporarily made daylight saving time year-round in response to a severe energy crisis, and, Prerau said, it “proved to be very unpopular in the middle of the winter, because of the very dark mornings.”

In Arizona, Harwood said his interest in time stems from his days as a B-52 navigator in the U.S. Air Force in the late 1970s and early 1980s, when he had to tell pilots which direction to go, and how fast, to get them to a certain place by a certain time.

Harwood started researching and was surprised to find a growing movement to stop changing the clocks. Harwood and Scott Yates, another activist who created a website that tracks the movement, say they don’t care whether states abolish daylight saving time, or keep it year-round — they just don’t think clocks should be changed twice a year.

In Massachusetts, a commission has been tasked with studying whether the state should stay on daylight saving time year-round. If the state made this change, it would move from Eastern time to the equivalent of Atlantic Standard Time, the zone to the east that includes Puerto Rico and Nova Scotia, essentially creating a fifth time zone in the continental United States.

For decades, the state has been changing its clocks with many people thinking there was a scientific reason for it, said Democratic state Sen. Eileen Donoghue, who is leading the commission. “The more you delve into it,” she said, “the more you find — not so much.” She said the commission is considering all potential effects of the change, including on the economy and public health.

Republican state Rep. Paul Frost, a member of the commission, is so far opposed to the idea. Adding another hour of darkness to winter mornings would mean young children are walking to school or to their bus stops in the dark, he said. “I’m deeply concerned over their safety.”

But Frost said he is willing to support going on daylight saving time year-round if his concerns are addressed, and if Massachusetts makes the change in conjunction with other states.

States in the region are small and compact, he said, and people often work or travel across state lines. If Massachusetts is on a different schedule, he said, it will cause problems and confusion. He also pointed out that being on the same schedule as New York, and the stock market, is important for Massachusetts.

“I don’t think we should do it willy-nilly,” Frost said. “I think there are consequences. I want to make sure we are thoroughly discussing and reviewing it.”

Jon Hurst, president of the Retailers Association of Massachusetts, said many retailers in the state also support the change, and want it to be made in conjunction with other states in the region. The retailers like the idea, he said, because the added daylight may encourage more shopping in the evenings.

Donoghue said she is hoping to work with other states to ask the federal government for the change. A bill was proposed in New Hampshire that says if Massachusetts goes on Atlantic time, New Hampshire will as well.

A similar effort is playing out on the other coast. Lawmakers in California, Idaho, Oregon and Washington hope to pass bills that would collectively ask Congress to put those states on to what would be the equivalent of Mountain Standard Time, according to Washington state Sen. Jim Honeyford, a Republican. The states are currently on Pacific time, except for a portion of Idaho, which is already on Mountain time.

Honeyford said it may take a few years, but he thinks states have a better chance of getting approval from the federal government if they approach the issue together.