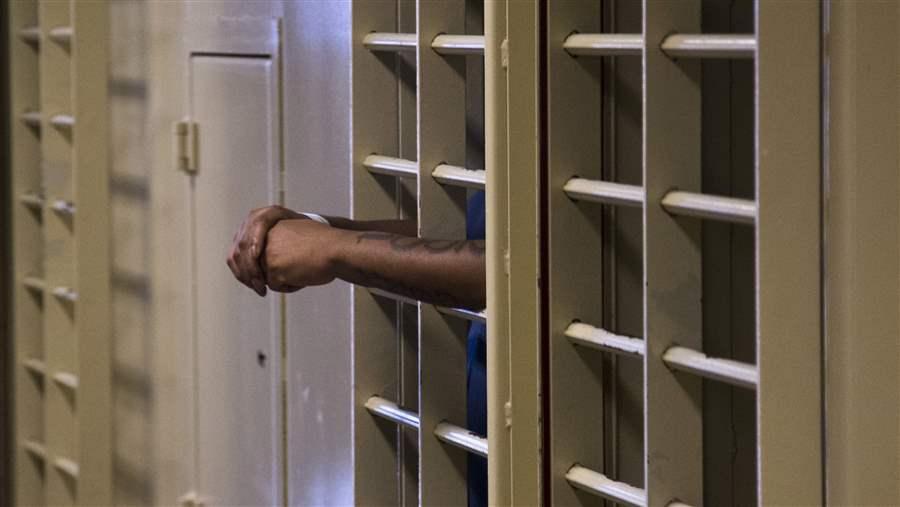 Jailing mentally ill people costs more and increases the likelihood they will be back. States and localities increasingly are working to get them treatment instead.

A dearth of beds at state psychiatric hospitals in many parts of the country and shortages of mental health resources mean that mentally ill people who commit minor crimes often end up languishing in jails, which are poorly equipped to handle their illnesses.

It’s a difficult problem that, without intervention, creates a grim cyclical pattern: Untreated mentally ill people get carted off to jail, where their illnesses go unaddressed, which increases the odds that they will commit crimes after their release.

But cities, counties and states across the U.S. are attempting to break that pattern, using law enforcement and criminal justice tools to direct those with mental illness toward treatment services that could help them control behaviors that got them into trouble.

The interventions come in many forms. There are now more than 300 mental health courts, in which defendants deemed mentally ill are directed to mental health treatment services rather than incarceration. Some jurisdictions, such as Maryland, allow for mental health competency exams to occur in community settings, so that defendants don’t have long waits for space at state hospitals, where the exams usually take place. And in Florida, Miami-Dade County gives some mentally ill defendants suspected of misdemeanors or nonviolent felonies the option of treatment rather than jail or prison time.

More jurisdictions are turning to what are known as crisis intervention teams — police officers who are trained to de-escalate situations involving people who show signs of mental illness and take them directly to mental health treatment centers rather than jail.

The results have been encouraging, with fewer arrests and fewer repeat offenders. The Miami-Dade County program, for example, cut nearly in half the chances that a mentally ill defendant would return to jail in the year after discharge compared to mentally ill defendants who were not in the program.

As a result of this and related programs in Miami-Dade County, the Florida Legislature last year passed a law that will make it easier for courts around the state to direct mentally ill defendants to treatment programs.

“It’s all about creating a plan that enables them to exist in the community without being a threat to public safety, to others and themselves,” said Cindy Schwartz, director of jail diversion for the 11th Judicial District’s Criminal Mental Health Project in Miami-Dade County.

Some legal scholars worry the programs involve law enforcement and the judiciary in public health roles that are outside their expertise. And mental health advocacy groups, such as Mental Health America, caution that just because criminal justice agencies have these tools available, they shouldn’t have a license to sweep more people with mental illnesses into the criminal justice system to pressure them into treatment.

But some judges and police groups, as well as mental health advocates, say that police, prosecutors and judges are left with no choice but to address mental illness because of characteristics of the population that gets caught up in the criminal justice system.

“That’s the reality of where we are,” said David Cloud, senior program associate in substance use and mental health for the Vera Institute, a nonprofit working on justice reform issues. “Someone has to take responsibility.”

The dimensions of the problem are sobering. The Treatment Advocacy Center (TAC), a nonprofit advocating on behalf of those with severe mental illness, estimates that in 2016, nearly 400,000 inmates in U.S. jails and prisons had a mental illness. Jails, in the minds of many in law enforcement and mental health advocates, have become modern-day asylums.

“If you took drugs and alcohol and mental illness out of my jail, my jail would be empty,” said Sheriff Mark Wasylyshyn of Wood County, Ohio, who echoes the frustration of many who run city and county jails.

Because state psychiatric hospitals are usually filled with patients who have been committed, or sent by the courts for mental competency evaluations or “restoration” services to establish competency, many of the mentally ill sit in jails for a long time.

According to a 2015 TAC survey, 78 percent of state hospitals surveyed reported that they had waitlists for forensic psychiatric beds, causing defendants to languish in jails for weeks and sometimes months. Often, advocates say, they are in jails waiting for a bed longer than they would be if they had been sentenced for a crime.

“The situation boils down to we have too many people sitting in jails because we don’t have enough beds to help them,” said John Snook, TAC’s executive director.

It’s not simply that jails are ill-equipped to treat the mentally ill. Studies, including one by the Urban Institute, a public policy research organization, found that the mentally ill remain in jail longer than others, return to jail more frequently, and cost more to incarcerate. Jails are also chaotic, noisy and dangerous, attributes more likely to exacerbate symptoms than soothe them.

Treatment, advocates say, would not only help individuals caught up in the cycle of arrest-jail-release-arrest but relieve pressure on jails and state hospitals.

Crisis intervention teams, the most widespread model to divert mentally ill offenders, began in 1989 in Memphis. Selected police officers receive up to 40 hours of training in mental illness and ways to de-escalate crises involving those exhibiting signs of mental disorder. Instead of arresting people who commit low-level crimes — such as disorderly conduct, public urination or trespassing — and taking them to jail, officers can take them to community mental health facilities.

According to the University of Memphis, which runs a training center on crisis intervention teams, CIT programs now operate in 2,632 jurisdictions across 46 states and Washington, D.C.

In Ohio, nearly 9,600 police officers have received CIT training since 2000, according to Jamie Carmichael, spokeswoman for the Ohio Department of Mental Health and Addiction Services. They operate in 86 of 88 counties, she said.

Christopher Nicastro, the department’s chief of criminal justice programs, said Ohio’s decision to expand Medicaid health coverage for low-income people under the Affordable Care Act has meant that many of the offenders encountered by crisis intervention teams are eligible for treatment under Medicaid. And that makes treatment more likely.

By avoiding arrest, Ohio’s CIT program keeps more of the mentally ill out of jail and relieves the need for mental health competency evaluations required for trial. That, in turn, relieves the pressure on Ohio’s state psychiatric hospitals, creating more space for others.

In Texas, police officers can bring mentally ill people to one of more than 30 stand-alone emergency mental health clinics the state began funding about a decade ago.

What makes the clinics financially viable is the use of telemedicine, said Avrim Fishkind, a psychiatrist who helped found the Texas network of mental health centers. Today, well over 90 percent of police encounters with those believed to be having a mental crisis can be resolved without an arrest, he said.

Even in places with crisis intervention teams, offenders with mental illness often end up in jail.

In South Florida, Judge Steven Leifman of Florida’s 11th Judicial Circuit has worked for nearly two decades on devising ways to steer mentally ill defendants into treatment rather than incarceration. But the population he is dealing with is large.

Miami-Dade County has the largest percentage of residents with serious mental illness (9.1 percent) of any urban area in country, according to Leifman’s Criminal Mental Health Project. And fewer than 13 percent of them receive treatment. The result is that police often are the first to respond to mental crises, and jails are filled with mentally ill arrestees.

Tim Coffey, coordinator of the court’s mental health project, said that of the 64,000 bookings into city or county jails last year, 11,000 involved people with severe mental illnesses. Their stays are up to eight times longer than other inmates, and their costs are seven times higher, the project said.

Crisis intervention teams have helped drop the average daily census of the jails, which Coffey said has fallen from 6,560 in 2001, when the program began, to 3,718 last year.

Getting to that point has taken time. Leifman began working in the early 2000s to get treatment for the mentally ill in jail for misdemeanors. Now, a defendant who is deemed by a physician at the jail to be mentally ill can agree to be sent to a public or private mental health facility for treatment, often as an outpatient. The court also has gotten support from the state, about $1.5 million a year, to provide the defendants with other services, such as housing and transportation.

And the court assists defendants with enrolling in Social Security for disability benefits, which makes them eligible for Medicaid. (Florida did not expand Medicaid, so many in this population could only be accepted if they were identified as disabled.)

If they follow their treatment regimen, said Schwartz, the diversion director, their charges are dropped. The program makes about 300 referrals a year, her office said.

In 2008, Miami-Dade launched a similar program for those charged with nonviolent second- or third-degree felonies, such as burglary and drug possession.

Instead of awaiting trial in jail, participants are sent to a 16-bed residential treatment program at Jackson Behavioral Health Hospital. After being stabilized, defendants remain at the facility undergoing treatment until their court date. Participants are usually released after their court appearance and monitored over the course of a year to make sure they are taking medications and participating in treatment. They also receive help with finding housing, transportation and jobs.

According to the 11th Circuit Court, those participating in the felony program achieve mental competency an average of 52 days sooner and cost 32 percent less than those who go to a state hospital.

But despite the successes, some legal analysts remain cautious of the approach.

Larry Fitch, a law professor at the University of Maryland who has advised the American Bar Association and the National Association of State Mental Health Program Directors on issues of criminal justice and mental illness, said the criminal justice system isn’t suited to playing a mental health role.

The answer, he said, is a well-resourced and well-functioning community mental health system. That, he conceded, appears to be a long way off.