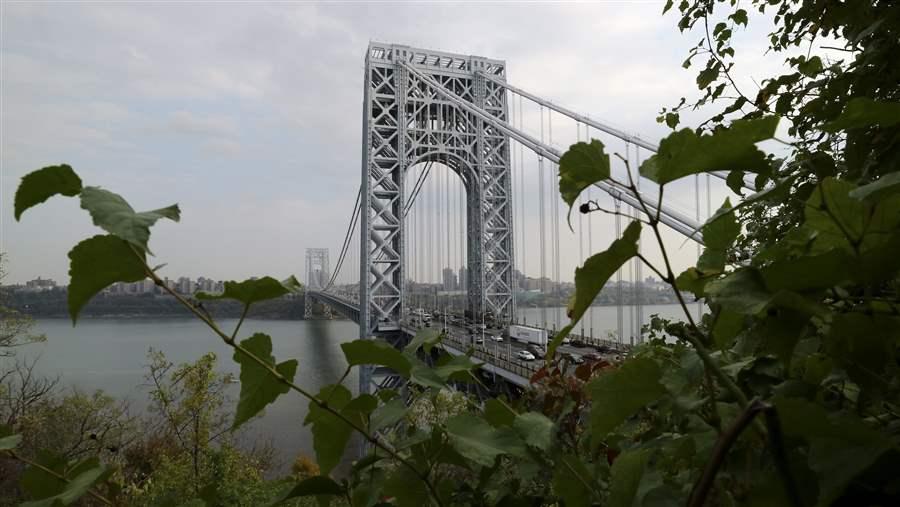 The George Washington Bridge spanning the Hudson River. The bridge is maintained by the Port Authority of New York and New Jersey.

While public authorities can succeed in clearing sometimes obstructed paths to debt issuance, some express concern about a lack of oversight of them.

Other large states, including California and Pennsylvania, also have set up public authorities to finance infrastructure projects. But New York historically has stood out for its extensive use of them, as documented in a recent report by the New York State Comptroller.

The report counts nearly 1,200 state and local public authorities, although the exact number is hard to verify since public authorities take many forms.  The largest is the Metropolitan Transportation Authority, New York’s regional transit agency, which has a bigger workforce (68,824 employees) than any of the state’s private-sector employers. New York’s public authorities issue nearly all of the state’s debt. As of March, 2016, this outstanding debt totaled over $267 billion, or $13,487 for each resident. The total net tax-supported debt among all states was $513 billion in 2015, according to Moody’s.

A Question of Oversight

General obligation bonds are issued by state governments primarily to fund infrastructure. They are repaid from general fund tax revenue, have checks such as requiring voter approval or not exceeding the previous years’ issuance by certain amounts.

Authority debt, by contrast, has few restrictions. Though this borrowing practice offers advantages such as accelerating construction of projects, it also has led to criticism that the state lacks sufficient oversight of authority finances that is demanded of other agencies. In the report, comptroller Thomas P. DiNapoli proposed a rule which would require the state legislature to approve all spending by public authorities.

“New York’s public authorities play an increasingly influential role in government yet they operate outside the traditional checks and balances that apply to state agencies,” DiNapoli said in a press release. “Some of these entities are repeatedly used in a way that circumvents borrowing limits and oversight. As a result, New York is shouldering a huge debt load issued by public entities operating in the shadows that voters never approved.”

Public authorities in New York and elsewhere are similar to private corporations but are created by a state—generally through a legislature, not a governor—to advance public interests, notably infrastructure. Unlike state-funded agencies, which are directly accountable to the state, public authorities maintain a large measure of independence. They generally are governed by boards of directors appointed by elected officials to serve fixed terms.

The history of public authorities dates to the 19th century when the growing nation was addressing infrastructure needs and states were looking for a way to finance them, according to Robert B. Ward, whose book on New York government researched the evolution of authorities.

Widespread use of general obligation bonds in the mid-1800s to build railroads, turnpikes, and other projects led some citizens to say they were tired of paying for them. As a result, states instituted restrictions on issuing general obligation debt, including approvals from legislative supermajorities and voters. But some state officials thought the restrictions were too limiting in the face of accumulating needs so they created public authorities to fill the void.

The primary characteristic of public authorities is their financial autonomy. Traditionally, public authorities own the assets they build. They usually rely on revenue bonds to build those assets. These bonds, which are not a direct obligation of the state, are repaid with the proceeds collected from operating the asset, such as highway tolls. By adopting this model and bypassing the need for voter approval, public authorities can become self-sufficient.

This independence allows New York and other states to address their infrastructure gaps without adding debt to state ledgers. The American Society of Civil Engineers recently has estimated that the country needs $4.6 trillion of infrastructure investment. With many states limited in the amount of general obligation debt they can issue, public authorities have become legal, acceptable ways of accessing debt financing and paying for capital projects.

Another reason for the strength of public authorities is a tacit perception that, if necessary, the state government may step in and back an authority’s debt even though the state may not be legally obligated to do so. Public authorities also may issue conduit debt, done on behalf of a third party, typically something like a hospital, university, or nonprofit institution.

New York lawmakers approved a series of reform measures in 2009 to improve the transparency of public authorities by requiring more detailed financial reporting. Saying “further work is needed,” DiNapoli is proposing to increase state supervision over what he and others call backdoor borrowing— using the authorities as another source of state revenue.

“Drawing on such non-recurring resources makes it easier to present a balanced state budget and avoid potentially difficult decisions on spending and/or revenue,” the Comptroller’s office said in the press release. “The state has regularly shifted responsibility for certain costs from its budget to various authorities. This obscures overall state spending levels and diminishes transparency, accountability and oversight.”

There is no one answer to how states should account for public authority debt in their financial reporting. A 50-state report by The Pew Charitable Trusts that is to be released later this year will explore how states manage and disclose their debt liabilities.

Stephen Fehr is a senior officer and Adam Levin is a senior associate with Pew’s state fiscal health team.