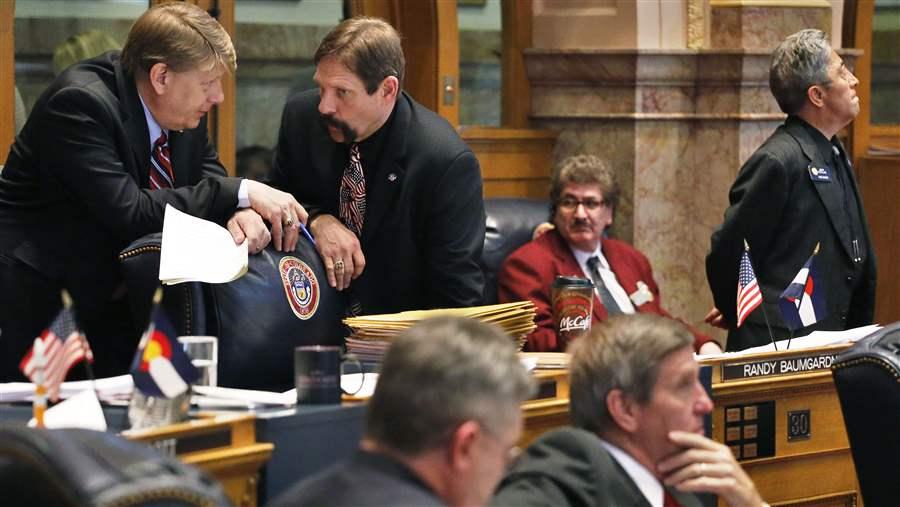 Former Republican Colorado state Sen. Mark Scheffel, left, now works for Advantage Capital Partners, which has been among the top participants in complex economic development programs used in several states. The firm says the programs spur needed investment, but economists and analysts say they have failed to deliver promised benefits.

This is part two of a two-part series

The deal Ryan Brennan of Advantage Capital Partners described to Washington state senators sounded too good to pass up.

At a hearing in Olympia in February, Brennan told the lawmakers that the bill they were considering would spur investment in businesses in struggling, rural areas of the state. Twenty or more states had already launched similar programs, Brennan said, and in neighboring Oregon, one of them had already created 1,309 jobs.

Most of the senators were sold. “I’m very excited about any economic development, especially in our rural areas,” one said. Two weeks later, the committee approved the bill.

Washington is one of at least 10 states considering so-called rural jobs bills, under which states award tax credits to companies that agree to invest in or loan money to funds set up by investment firms or other brokers. These funds then invest the money in rural businesses. (Last week, the Georgia Legislature passed a rural jobs bill, and in Utah, one was signed into law last month.) The proposals are the latest iteration of an approach that at least 20 states and Washington, D.C., have turned to over the last three decades.

But most states that have evaluated the multilayered subsidized lending programs — originally CAPCO (certified capital companies) programs and later New Markets Tax Credit programs — have found that they failed to deliver promised jobs and tax revenue.

As Advantage representatives tour the country advocating for the new rural jobs bills, they sometimes point to the success of similar programs in nearby states. In Washington, Brennan pointed to Oregon.

But Oregon has not audited its program, and the state does not verify the job numbers reported by the investment firms. That’s the case across the country: The investment firms typically bolster their claims using reports written by academics they hired. Independent policy analysts say the authors of the studies use methods that inflate the economic benefits of the programs.

The fact that states are still considering this type of program “just reflects the persistence of the lobbyists,” said Greg LeRoy, executive director of Good Jobs First, a national policy center that promotes accountability in economic development.

Representatives of Advantage, Enhanced and Stonehenge declined to comment on the record in person or by phone. But they said via email that they engage in advocacy to spread awareness of these programs, which the firms say successfully meet states’ goals, including creating and retaining jobs.

However, a Stateline analysis suggests that Advantage, Enhanced, Stonehenge or their affiliates have handled a substantial portion of the tax credits made available under the CAPCO and state New Markets programs. Stateline reviewed more than half of the programs, all of those for which state information was available. Under those programs, about $2.6 billion in state tax credits was allocated, and $1.6 billion was managed by Advantage, Enhanced, Stonehenge or their affiliates.

States have often offered more than one round of funding for their CAPCO and New Markets programs. Enhanced said that it has participated in fewer than half of the rounds of funding states have offered under their programs.

From 2002 to 2016, Advantage hired lobbyists in 13 states that have considered the programs, Enhanced in 11, and Stonehenge in nine, according to data from the National Institute on Money in State Politics. In Florida alone, the firms spent about $1.5 million on lobbying in the last 10 years, including about $865,000 spent by Advantage. From 2009 to 2014, the state committed up to $216.3 million in tax credits under its New Markets program.

In 2011, as the Wisconsin Legislature was considering a proposal similar to a widely criticized CAPCO program the state enacted in 1997, Advantage, Enhanced and Stonehenge hired lobbyists to advocate for their interests. According to state disclosure records, the lobbyists worked 1,310 hours — about 88 percent of reported lobbying hours related to the bill — and were paid about $252,500 by the firms.

Advantage is lobbying for rural jobs bills this year, and it has hired lobbyists in at least 10 of the 11 states where rural jobs bills have been introduced (Arizona, Georgia, Kansas, Kentucky, Massachusetts, Minnesota, Missouri, South Carolina, Utah and Washington). New York is also considering a rural jobs bill.

Generally, the rural jobs bills would require an investment firm or its affiliate to show in its application to the state that the economic benefits of the tax credits will exceed the costs. “At the end of the program, the state is at a net positive — or should be at a net positive,” an Advantage lobbyist told state representatives in Arizona in February.

But supporters’ jobs numbers are flawed, said Becki Gray, senior vice president of the John Locke Foundation, a North Carolina-based think tank that advocates for a limited role for government.

According to Gray, the firms and other backers of the tax-credit programs tout numbers that include all of the jobs created and some or all of the jobs retained at the companies that receive funding through the programs, even when those companies also received funding from other sources.

For example, in 2011, Oregon created a New Markets program that will provide up to $78 million in tax credits to qualifying companies, as long as the funds set up by the firms plow a total of $200 million into local businesses.

The Oregon Coalition for Capital — a nonprofit that has advocated for the program — said in a recent report that by 2015, 34 deals had generated an estimated 2,553 permanent full-time jobs, and more than enough tax revenue to offset the tax credits. But the study counted all or most of the jobs at the businesses that received funding, not just the new jobs. And it counted these jobs as being created or retained by the program, even though funding from other sources played a role, according to state data.

Advantage said it only counts jobs as “retained” when the company would have shed those jobs if not for the money it got through the tax-credit program. But policy analysts say Advantage and other investment firms often claim the tax credits preserved jobs even when the program funds were used for an expansion or renovation, projects that don’t necessarily save jobs.

For example, in 2013, Oregon allocated $1.6 million in tax credits in a complicated deal managed by an affiliate of Enhanced. The deal provided funding for ShelterCare, a nonprofit that provides housing, health care, financial assistance and job training in Eugene. Susan Ban, ShelterCare’s executive director, said the nonprofit used the money to help pay for a renovation of office space.

Enhanced told Oregon in 2015 that 134 jobs — ShelterCare’s entire workforce, according to Ban — had been retained as a result of the project. But Ban said ShelterCare would not have cut those jobs if the deal had never happened.

Advantage said by email that while the tax-credit programs aim to create jobs and produce revenue for the state, lawmakers know there are no guarantees.

But Brennan and other Advantage representatives, and the sponsors of the bills, usually portray them as a slam dunk, sometimes touting safeguards that don’t exist.

Republican state Rep. Troy Waymaster, who co-sponsored the rural jobs bill introduced in Kansas this year, said last month that Kansas would only award the tax credits if and when the promised jobs materialized, even though the bill doesn’t include that protection.

Initially, Waymaster said that the bill authors’ intention was to ensure that jobs were created before the tax credits were awarded.

The intent of the legislation, he said, is to generate economic activity in rural areas of Kansas. “This bill passed the House with overwhelming support because those members realized the benefit of a strong and economically robust rural Kansas,” he said.

The firms sometimes bring in former or current state lawmakers to vouch for their programs. Mark Scheffel, a former state senator in Colorado, now works for Advantage. In testifying before an Arizona House committee in February, Scheffel talked about the success of similar programs in Oregon and Texas but failed to mention the checkered history of Colorado’s own program.

A 2003 state audit revealed that even though Colorado had handed out $100 million in tax credits, only $44 million had been invested or was available for investment in businesses at the time of the audit. It also recommended the state end the program early, which it subsequently did.

In Ohio, when investment firms tried to sell a rural jobs program to the Legislature in 2015, they presented “the rosier side of what the investments do,” said former Republican state Rep. Jim Buchy.

But as the state considered the bill, Buchy heard about problems other states had encountered. He said he felt at the time that taxpayers in other states had been “left on the hook” for bad investments. He voted against the bill, which ultimately failed.

Buchy urged lawmakers considering similar bills this year to give them more scrutiny.

“The way they had these jobs figured out, they didn’t add up,” he said. “The jobs actually created by these are nothing near what they sold the Legislature on.”