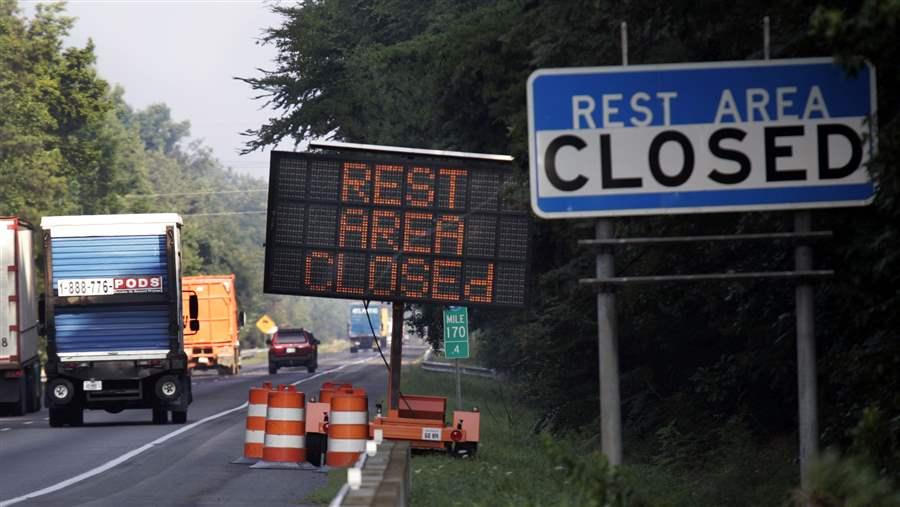 Some states are closing traditional highway rest stops because they don’t have the money to maintain them or because the stops don’t attract enough traffic to justify keeping them open.

For more than half a century, old-fashioned, no-frills highway rest stops have welcomed motorists looking for a break from the road, a bathroom or a picnic table where they can eat lunch.

But in some states, these roadside areas are disappearing.

Cash-strapped transportation agencies are shuttering the old ones to save money, or because they don’t attract enough traffic or are in such bad shape that renovating them is too costly. Or, the stops have been overtaken by tourist information centers, service plazas that take in revenue from gasoline and food sales, or commercial strips off interstate exits.

Florida, Michigan, Ohio and South Dakota are among the states that have closed traditional rest stops in the last two years. And a battle is brewing in Connecticut over a proposal to shut down all seven stops on its interstate highways to save money.

But advocates of maintaining traditional rest areas say even if motorists are offered flashier options for pit stops, the ones that sprung up as highways did are still needed for driver safety and convenience. Some view them as a tranquil, environmentally friendly alternative to crowded service plazas and commercial strips.

“Shutting them down would be the end of an era,” said Joanna Dowling, a historian who researches rest areas and runs the website RestAreaHistory.org. “Rest areas take you away from the road and the hecticness of travel and immerse you in the natural landscape.”

Some of the old rest areas are rustic and offer just the basics — two toilets, water fountains, a parking area and picnic tables. Others are spiffier and more modern, with larger bathrooms, vending machines, dog walk areas and a desk staffed by state workers who hand out maps and other tourist information.

But unlike service plazas, rest areas on federal interstate highways are prohibited from selling gasoline or food other than from vending machines, the proceeds of which traditionally go to people who are visually impaired. State transportation departments run the rest areas and are responsible for cleaning and maintaining them. That can take a chunk of their budget, depending on staffing and amenities, officials say.

In Florida, for example, the Department of Transportation tore down a traditional highway rest area on a local road off I-75 in Punta Gorda in 2015 because it didn’t get much use, agency spokesman Zac Burch said. Travelers were choosing instead to pull over at a truck stop, gasoline station and fast food chains off nearby exits.

Getting rid of the rest area saved an estimated $300,000 a year in maintenance costs, and the state probably will sell most of the 20-acre site, Burch said. The department also built a new, fancier rest area the year before about 100 miles away on I-75 and is constructing another on the opposite side of the road.

But groups that represent motorists and truckers say shuttering rest areas is a disservice to drivers — and a safety concern.

“To us, this is more than just a restroom break and snack,” said Rich Romer, AAA’s state relations manager. “It’s a safety issue because of drowsiness. Rest stops are one of the many tools to keep motorists safe and help them arrive at their destination alive.”

Highway rest areas are critical for truck drivers’ safety and their ability to comply with a federal law limiting the number of hours they can drive without rest, said Darrin Roth, spokesman for the American Trucking Associations, a trucking industry trade group.

In many parts of the country, particularly outside metropolitan areas, there’s a severe shortage of places for trucks to park, Roth said. Commercial truck stops often fill up, he said, and highway rest areas offer a safe place to park for the night because they are well-lit and often filled with other truckers.

“They may not necessarily have the facilities that truck stops do, but they are critical to meeting the needs of truck drivers,” Roth said. “And they’re certainly more desirable than having a truck park on the shoulder or on a ramp, which is not just dangerous, it’s illegal.”

“Safety rest areas” were constructed as part of the U.S. interstate highway system that was created in 1956. They were envisioned as off-road respites where motorists could take a break. They were easy to access and offered clean bathrooms, drinking water and picnic grounds.

They often were built where there weren’t many options for family road trippers in need of a rest. Over time, however, fast food chains, gasoline stations and motels have sprung up just off of exits, offering more services to drivers.

“Decades ago, when these rest areas went in, we didn’t have a convenience store or a truck stop at every exit, like we do now,” said Tammy Williams, an engineer for the South Dakota Department of Transportation. “It was a totally different world.”

Nowadays, motorists in some areas also can pull into state-owned service plazas that contain gas stations, fast-food restaurants and convenience stores. Some states lease service-area space to businesses that operate them and give back a percentage of sales revenues.

All of this has diminished the need for — and the number of — traditional rest areas on interstates and state highways.

In Ohio, for example, the number has dropped from 294 in 1961 to 89 today, said state transportation department spokesman Matt Bruning.

Age and costs have helped speed the demise of rest areas.

Michigan, for example, closed a 1970s-era rest stop on US-127 near Houghton Lake in December. It was old, needed renovation or replacement, wasn’t used much and was located within 30 miles of other rest areas, said transportation department spokesman James Lake. The building did not meet Americans with Disabilities Act or energy efficiency standards, had water and septic problems, and would have cost about $2 million to replace.

South Dakota shuttered four rest areas in October — two on I-90 in Tilford and two on I-29 in Hidewood. All were in major need of rehabilitation or reconstruction, which would have cost an estimated $8.5 million, the transportation department’s Williams said. Closing them will save the state about $210,000 a year in maintenance, a task force report found.

Williams said the agency’s goal is to focus on tourism by opening two new welcome centers at the state’s borders and expanding two others.

“We don’t look at shutting down the old rest areas as negative; we look at it as positive,” she said. “Tourism is the second-highest revenue-generating source that we have in our state.”

In Connecticut, a battle is raging over the state’s proposal to shut down all seven interstate rest areas.

The Legislature eliminated funding to operate, staff and maintain them about two years ago, and the transportation department has been shifting funding ever since to keep them open, said department spokesman Kevin Nursick.

The areas used to be staffed 24/7. But about six months ago, officials cut back, and the buildings at each stop, which have bathrooms, are now open only seven hours during the day. Portable toilets remain available outside.

That, too, may change. The department is proposing to close the buildings, remove the portable toilets and only keep the parking. Twelve positions for rest area attendants would be cut and the state would save $1.1 million over two years, Nursick said.

“We’ve been doing this on our own dime, scraping and picking up the pennies on the floor to keep the rest areas open,” he said. “There’s no more funding left to scrounge.”

Instead of the rest areas, motorists will be able to use nearly two dozen renovated state-owned service plazas operated by the private sector — what Nursick calls “rest areas on steroids” — that are staffed 24/7 and offer food, gasoline and other amenities.

But some, especially in the trucking industry, aren’t happy.

“We believe the rest areas should stay open and be fully staffed, for safety purposes,” said Joseph Sculley, president of the Motor Transport Association of Connecticut, which represents trucking companies. “The drivers are mandated by federal law to take breaks and there’s already a shortage of safe places where they can do that. This would make that situation even worse.”

Recreational vehicle owners, who often pull into stops to stretch their legs, eat lunch and walk the dog, are also unhappy about the nation’s changing highway landscape.

They never have to worry about a rest stop parking area being too small to accommodate their motor homes, said Pamela Kay, of the Family Motor Coach Association, a national RV owners group.

“It’s easier for someone in a passenger vehicle to just hop off the interstate and pop into a fast-food restaurant for a break,” Kay said. “That’s not the case when you’re traveling in an RV.”