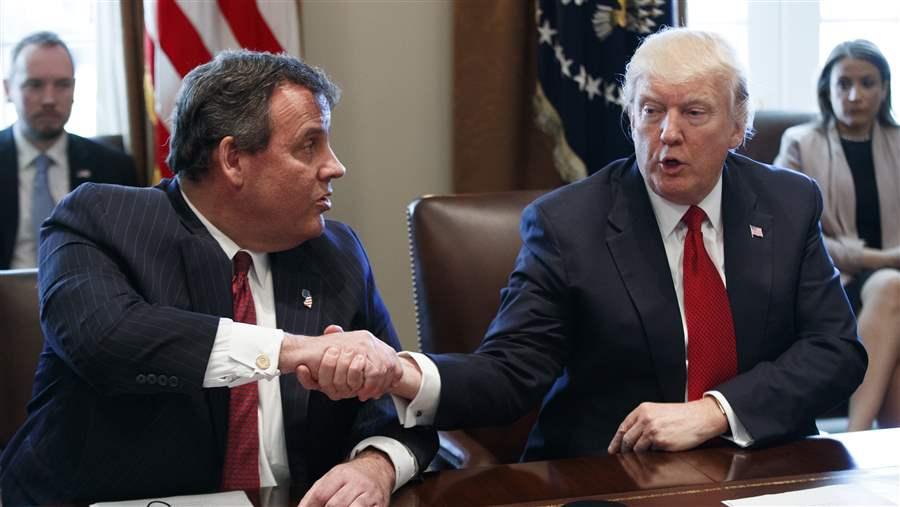 President Donald Trump shakes hands with New Jersey Gov. Chris Christie during a discussion of opioid and drug abuse at the White House.

Last month, Christie, a Republican, signed a bill setting a five-day limit on first-time prescriptions for opioid painkillers such as Vicodin, Percocet and OxyContin, the toughest restriction yet in a growing trend among states to curtail liberal prescribing of the highly addictive medications. New Jersey’s new law also requires insurance companies to approve coverage for addiction treatment as soon as a patient seeks it.

An estimated 2.5 million people are addicted to painkillers or heroin in the U.S. More than 30,000 Americans died in 2015 from overdoses of opioid painkillers and heroin, an epidemic widely considered to be the result of the overprescribing of pain medicine over the past two decades.

The new White House commission, created through an executive order, will review existing federal, state and local policies that have proven successful in combating the painkiller and heroin epidemic. It is also charged with identifying existing federal funding as well as the availability and accessibility of addiction treatment.

In the last two years, states have enacted a variety of laws aimed at quelling the opioid epidemic. As in New Jersey, lawmakers in several states have set limits on the number of pills a physician can prescribe to a patient for pain on the first visit. In addition, most states have beefed up online systems that monitor prescriptions to prevent addicts from “doctor shopping” for more pills.

States have also expanded the use of naloxone, an overdose antidote drug few lawmakers had heard of until recently. And many states have adopted requirements that Medicaid and other insurers pay for all medically recommended addiction services, just as they would for other diseases, according to the National Conference of State Legislatures.

The president’s order requires the commission to submit interim recommendations for a federal response to the opioid crisis in 90 days and a final report by Oct. 1.