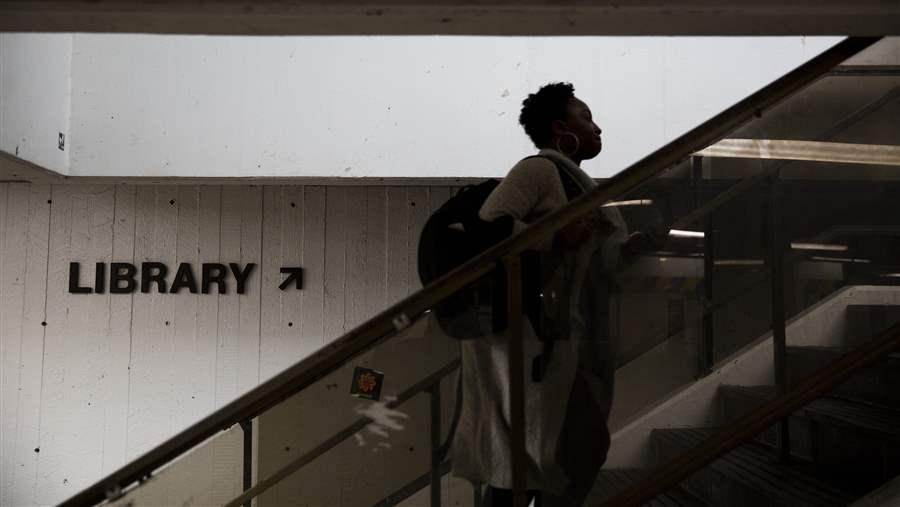 A stairwell at Georgia State University in Atlanta. Georgia is proving that the merger of two- and four-year colleges can help students succeed, and other states are taking notice.

Students who apply to Georgia State University no longer receive a rejection letter if they don’t get in. Instead, they’re invited to enroll in Georgia State’s Perimeter College — the former community college that was absorbed by the Atlanta university last year.

Now that the two schools are one, students who attend classes on one of the five Perimeter College campuses can easily transition to complete a four-year degree at the university. Georgia State expanded its system for advising and tracking students to Perimeter College and used money saved through the merger to hire more people to counsel them.

In just a year since the schools consolidated, the graduation rate for first-time, full-time students in two-year programs at the college doubled, from 6 to 12 percent.

As state policymakers nationwide consider merging colleges to cut costs, Georgia is proving that it’s also possible to use mergers to help students succeed. Preliminary research suggests that the first four mergers in the university system, out of 14 total since 2011, have made students more likely to stay in college.

The state’s consolidation strategy may not work in other states. And merging two- and four-year colleges may be the hardest consolidation to pull off. But Tim Renick, who leads Georgia State’s efforts to keep students on track to earn their degrees, said it’s worth asking if it might.

The University System of Georgia has fielded calls from policymakers in 10 other states who want to find out how the state has combined colleges so successfully, said Shelley Nickel, executive vice chancellor for strategy and fiscal affairs at the university system.

Pennsylvania and Vermont are considering merging schools to cut costs and adjust to changing demographics. And Oregon state Sen. Peter Courtney, a Democrat, has proposed allowing community colleges and public universities to merge, both in order to cut costs and increase transfer rates.

Raising graduation rates without increasing state funding has become something of a holy grail in higher education. Although a majority of states have pledged to ensure more state residents graduate from college, per-student funding remains below where it was before the Great Recession of 2007 to 2009.

But mergers can be incredibly difficult to manage. There are plenty of examples of mergers around the country since the 1980s that have increased tuition, failed to reduce the costs of running colleges and universities, and created tense standoffs between administrators and faculty members, students and alumni.

Talk of merging schools — whether that means combining community colleges, four-year universities or both — has become more common in recent years, as state funding for higher education has fallen and the teenage population has shrunk, said Tom Harnisch, director of state relations and policy analysis at the American Association of State Colleges and Universities.

Since 2010, about 40 college mergers across at least nine states — a little less than half the total mergers in that period — have involved at least one public college, according to Higher Education Publications Inc., a directory company.

“One of the main reasons to merge campuses is to cut costs,” Harnisch said. The new school needs just one president and one set of department heads, rather than two. But there’s no good data on whether the mergers actually save money. “The extent of cost savings remains an open question,” he said.

Mergers can end up costing students more. A study by Lauren Russell, a graduate student at the Massachusetts Institute of Technology, found that the average merger of public colleges led to a 7 percent jump in tuition. She said this may be because the mergers create a large university that dominates the local market and can get away with raising prices.

Combining schools with different cultures, missions and traditions can be a management nightmare. Community colleges and four-year universities rarely merge because they’re so different. Two-year colleges typically offer a mix of academic and vocational courses, charge a low price, admit any student who walks through the door, and have faculty who focus on teaching.

Four-year colleges, meanwhile, typically focus on academics and sports, charge a higher price, turn students away through a selective admissions process, and often have faculty who focus on research.

Monty Sullivan, the president of the Louisiana Community and Technical College System, said that policymakers in his state have floated the idea of combining two- and four-year schools in the past. “I can’t say to you emphatically enough how misguided that is,” he said of such mergers.

Sullivan worries that if any of Louisiana’s two-year colleges became part of a four-year university, it would lose its focus on career training.

What Happened in Georgia

The chancellor and board of regents of Georgia’s university system started to talk about merging schools in 2010. At the time, there were 35 colleges and universities in the system, and its leaders thought that consolidation could save money and better serve students.

Georgia’s situation is somewhat different from many other states. First, the university system doesn’t just include universities; it also includes several colleges that primarily offer two-year degrees. The colleges, like the former Georgia Perimeter College, focus on academic rather than vocational training.

Second, raising graduation rates was a goal and system leaders decided to spend any savings achieved by merging to help students stay on track. “The bottom line and the goal was not, ‘let’s save the state of Georgia money,’ ” Renick said.

It helped that university faculty in Georgia are not unionized and have less power to protest mergers they don’t like than do faculty in, say, Pennsylvania.

Georgia State’s merger with Perimeter College was even more unusual because it was proposed as an attempt to increase graduation rates.

Both schools serve mostly low-income, black and Latino students. Before the merger, about one in five Georgia State students had previously attended the two-year college, administrators say. But while Georgia State pulled its graduation rate up from 32 to 54 percent over the past decade (the national average is 58 percent), Georgia Perimeter College floundered.

“Georgia State has done a really good job on their retention and progression to graduation,” Nickel said. “The thought was ... if they can do that with their student population, can they do that with Georgia Perimeter College?”

So far, half of the $6 million saved through the consolidation has been set aside to hire new advisers, financial aid counselors and other staff for student services, said Peter Lyons, the vice provost and dean of Perimeter College. About 30 advisers have been hired, he said.

Georgia State expanded its advising program to the two-year campuses — including software that tracks students and alerts advisers when they’re in danger of failing a class and microgrants for students who are a few hundred dollars short on their next tuition payment.

Lyons said the consolidation also has lifted spirits on the two-year campuses. Georgia State gear has been flying off the shelves at campus bookstores, and students feel they’re getting more attention from job recruiters than in the past, he said.

Russell, the MIT graduate student, has found that the first four mergers in Georgia’s university system increased the probability of students completing two years of college by 7.4 percentage points. She also found that the mergers haven’t led to higher tuition or fees.

Mergers may be the hardest and most painful way to get two- and four-year schools to work together to help students graduate, said Tom Sugar, the president of Complete College America, a nonprofit that seeks to increase the number of college graduates.

“I’m not out there to scale mergers,” Sugar said, but to build partnerships that make it easier for students to transfer and stay on track to earn a degree.

His organization is working with four universities and four community colleges in Houston to make sure students stay on track to graduate and are able to easily transfer their course credits citywide.

Many two-year colleges, from Valencia College in central Florida to Big Sandy Community and Technical College in eastern Kentucky, have such close partnerships with nearby universities that they offer university classes on campus — meaning students can transfer and earn bachelor’s degree credits without ever showing up on the partner university’s campus.

In Arkansas, six community colleges that formerly ran independently have joined the University of Arkansas system in recent years, and now report to the same board of trustees and president as university campuses. Similar structures exist among two-year colleges in several other states.

Margaret Ellibee, chancellor of the new University of Arkansas-Pulaski Technical College, said that since joining the university system last month, her college has been given the go-ahead to offer two associate degrees previously offered by the nearby University of Arkansas for Medical Sciences. She’s also talking to the University of Arkansas-Little Rock about creating a pathway for students who complete two-year paralegal degrees to transfer as pre-law students.

It’s not clear whether merely being under the same administrative umbrella helps boost graduation rates, though. What does improve student outcomes, Sugar said, is efforts to make big structural changes in how education is delivered — improving remedial math, for instance — and how students are guided through college.