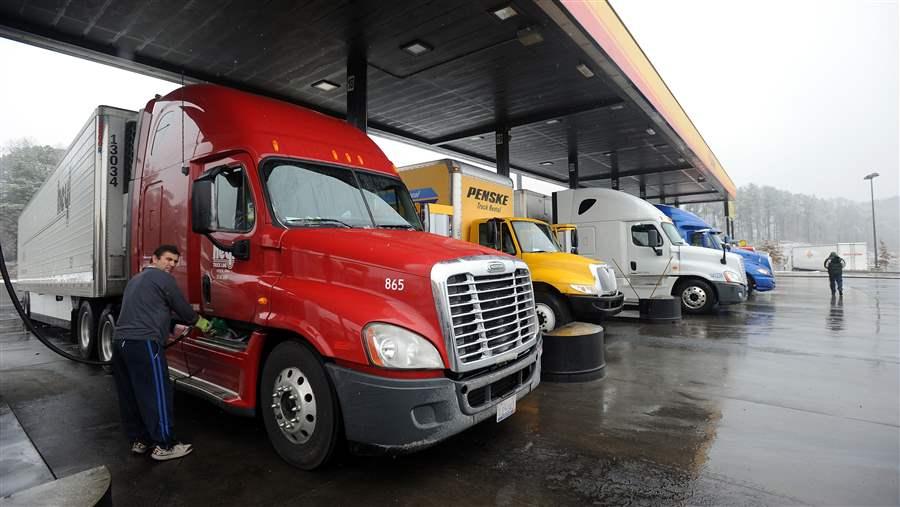 Some states are enlisting truckers to combat sex trafficking by asking them to report suspicious activity.

For most of his 20-year trucking career, Antoine Sadler figured if he saw something untoward at the truck stops, travel plazas and motels along his cross-country routes, the police would handle it.

But three years ago, Sadler, who drives for Wal-Mart, took a special training course for truckers, which taught him how to identify potential victims of sex trafficking: SUVs full of young girls in revealing clothing or someone at a rest stop clearly under the control of someone else. He realized that as a trucker, he was in a position to intervene by asking someone clearly in distress if they needed help or by calling the police.

“As drivers, we should be the front line,” said Sadler, 43, who lives in North Carolina and now educates other truckers about sex trafficking. “That’s the only way this epidemic will stop: if everyone’s watching.”

Some states are starting to agree with Sadler’s conclusion. Ohio in July began requiring that commercial truck drivers be trained in how to spot telltale signs of sex trafficking and how to report it. Last week, the Arkansas House approved a bill that would require training for truckers. Kansas, Kentucky and Texas also are considering similar bills — though the Kentucky bill goes a step further and would make it a crime for licensed truckers to use their rigs to facilitate trafficking, engage in prostitution or transport minors.

The legislation represents a new attempt by states to enlist the public’s help in combating sex trafficking where it’s likely to occur — at highway truck and rest stops and in hotels and motels — or in hospitals, where victims sometimes end up.

In January, Democratic Gov. Dannel Malloy of Connecticut announced an initiative in which state officials, law schools and hotel industry executives would train hotel and motel employees on how to be on the lookout for and report trafficking. In New York, Democratic Assemblywoman Amy Paulin introduced a bill this month that would require training for hotel workers. It’s along the lines of a law approved last year that requires New York hospital workers to be on the lookout for victims of trafficking.

Educating and enlisting occupations that are likely to witness trafficking only makes sense to lawmakers like Paulin. Victims are often transported across state lines and show up in bus terminals or at truck stops, or they are put to work around truck stops, sports arenas, hotels, motels and convention centers.

“If [hotel workers] see a girl hidden in a room for days, or if they see the same girl being brought back four or five times a week, they look the other way. But if they’re taught what to do, they can help those victims in a serious and positive way,” Paulin said.

Involving people like truckers also makes sense to Kendis Paris, executive director of Truckers Against Trafficking, a nonprofit that works with states’ attorneys general to implement training programs for truckers.

After all, she said, there are more truck drivers on the road than police.

“There are 3 million truckers,” Paris said. “If we can empower and equip them to be a transient army for law enforcement, think how many victims could be identified, and how many perpetrators could be arrested.”

‘Opportunity to Save Lives’

States in recent years have enacted tough laws that target sex traffickers, while at the same time providing help for minors and women who have been forced into prostitution.

Nonetheless, trafficking remains a growing criminal enterprise, many states say. Nationally, there are no reliable statistics on trafficking, the U.S. Justice Department says. But the attorneys general in Indiana and Kentucky say trafficking is on the rise in their states, as do the Montana Department of Justice and the Miami-Dade State Attorney’s Office in South Florida. Authorities in some states are concerned the increase could be fueled by the nation’s drug addiction epidemic.

An estimated one in six runaways reported to the National Center for Missing and Exploited Children as missing were likely to be victims of sex trafficking.

As reported numbers of cases of prostitution and sex slavery rise, indications are the nation’s exploding opioid addiction epidemic may be a contributing factor — and drug treatment clinics may be yet another place where traffickers go in search of people to target.

“Traffickers will literally line up outside clinics and try to lure women into this industry with promises of drugs,” Democratic Attorney General Maura Healey of Massachusetts told the Boston Herald this month.

Enlisting members of the public, especially truckers, as crime fighters is a next logical step in combating the trafficking, said Arkansas state Rep. Charlotte Douglas, a Republican who sponsored the trucker training bill in her state.

“The more people we can train, the more eyes and ears are going to be out there,” Douglas said. “It’s not a burden to get this training. It’s an opportunity to save lives.”