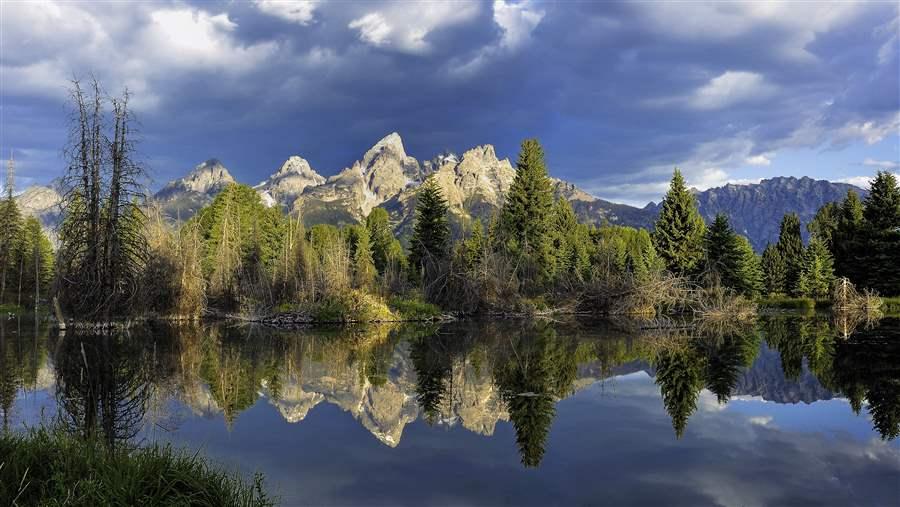 The Grand Teton Range in Wyoming. Gov. Matt Mead signed legislation on March 13 that will lower a spending cap placed on the investment earnings from Wyoming’s $7 billion mineral trust fund.

A discussion that recently took place in Wyoming underlines the policy choices energy states face when deciding how much to spend of the income generated by their sovereign wealth funds.

In those five states, along with Utah and West Virginia, the question of how to spend the income generated by this severance tax-based investment has consistently emerged in policy debates. In North Dakota, lawmakers have been talking about how they might spend the investment earnings since creating the fund in 2011; the state can start drawing from its $4 billion fund for the first time after June 30.

Sovereign wealth funds are derived from severance taxes collected on oil, natural gas, coal, and other minerals extracted in the state. By investing a portion of this revenue to generate returns, state officials transform a volatile, finite revenue stream into a permanent asset. In this way, officials can spend the investment returns on a specific public purpose, such as education, that benefits several generations of residents.

Alaska, Montana, New Mexico, Utah, and Wyoming use a portion of their investment earnings to support ongoing expenses and debts. In deciding how much to spend, states face an inherent tradeoff between meeting current needs and growing their investments over the long term. Drawing down investment earnings means there is less money to reinvest, which curbs a sovereign wealth fund’s long-term growth. This caveat is especially important given that severance tax revenue is not a guaranteed funding stream in the long term as natural resources are finite.

The debate in Wyoming centered on the spending policy of the Permanent Wyoming Mineral Trust Fund. Added to the state constitution in 1975, the fund held more than $7 billion at the end of 2016. Since the fund’s creation, state officials have directed all investment earnings into the general fund, which finances most state programs and services. Over a 10-year period from 2006 to 2015, the earnings totaled $2.5 billion— $500 million in 2015 alone.  The general fund budget is about $2.5 billion in the current two-year cycle.

Actual spending out of these earnings was previously limited to an amount equal to 5 percent of the trust fund’s market value averaged over the past five years. However, this constraint is only binding if investment earnings are higher than 5 percent.  Because returns have been lower than that in recent years, particularly in the bond market, the legislation passed in March, 2017 reduces the spending rate to 4.75 percent beginning in fiscal year 2018.

Officials generally see the investment income generated by a sovereign wealth fund as a reliable revenue stream for states that depend heavily on severance tax collections, which fluctuate, often dramatically, with energy markets. For example, Pew found that the Wyoming mineral trust fund’s investment earnings were 25 percent less volatile than the state’s severance tax revenue from 1976 through 2000. Nevertheless, there is a degree of uncertainty in investment returns as they depend on the broader conditions of financial markets and the economy as a whole. This volatility has implications for the level of spending out of investment earnings, particularly if policymakers care about smoothing expenses from year to year.

Along with short-term budget priorities, a sovereign wealth fund’s long-term growth is tied closely to its spending policy. Despite many states’ reliance on their fund’s investment earnings to help balance their budgets, sovereign wealth funds are ultimately designed to provide a permanent income source instead of a liquid asset, and to ensure that benefits extend to future generations.

A state’s spending policy would ideally guard against any erosion of the size of the fund. One simple strategy is tying spending to the portfolio’s real rate of return— essentially “inflation-proofing” the fund.

Yale University’s endowment implements a two-part spending formula that financial experts have widely cited as well designed. The first part gives weight to the previous period’s spending rate, adjusted for inflation, to smooth year-to-year spending and preserve the fund’s real value. The second part gives weight to a long-term spending rate that prevents the fund from shrinking over time. Balancing these short- and long-term considerations is a clear challenge for policymakers hoping to manage their state’s current and future fiscal health.

Stephen C. Fehr is a senior officer and Alexandria Zhang is a senior associate with Pew’s state fiscal health team.