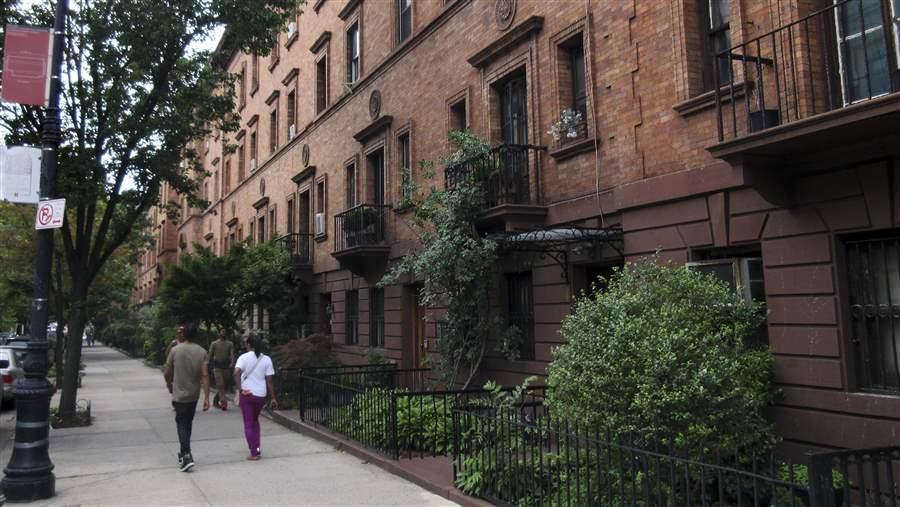 Trees line a quiet streetscape in the Harlem section of New York. Trees can help bring down rising temperatures in cities.

Rudy Lane is a two-lane road that curves through the leafy suburb of Windy Hills east of Louisville, Kentucky. Broadway is a main drag downtown where the federal and state courthouses bump up against the 1920s-era Brown Hotel.

In the hottest spots near the two streets, the average temperatures in summer differ by 6 degrees. Why? Trees. Windy Hills has them. Downtown Louisville: Not so much.

But in November, an anonymous donor gave Louisville a $1 million matching grant to plant trees. And now “we’re planting furiously,” said Maria Koetter, director of the Office of Sustainability for the Louisville metro government, which includes surrounding Jefferson County.

The move by Louisville to plant trees is part of a nationwide trend of cities bringing nature back to urban areas to help prevent a buildup of heat, which gets trapped in asphalt, parking lots and rooftops. The Nature Conservancy, a nonprofit environmental group, is working with 20 cities, including Louisville, to help cool their temperatures by providing tree shade among other measures.

Louisville is one of the fastest-warming cities in the U.S., in part because of its location on the Ohio River in a valley that traps air, smog and heat, according to Climate Central, a nonprofit that studies climate change. And that makes it an “urban heat island” that is significantly warmer than surrounding rural areas.

Urban parts of the metropolitan Louisville area are an average of 4.4 degrees Fahrenheit warmer than rural spots — making it the city with the fifth most intense “urban heat island effect” in the summer, according to a 2014 study by the group. Desert city Las Vegas is No. 1. But Denver, Minneapolis, Portland, Oregon, and Seattle — cities you might think of as being leafy or shady — are on the group’s Top 10 list, too.

Of the 60 cities it studied, Climate Central found 57 had measurable urban heat island effects in the 10 years leading up to 2014. Temperatures in some metro areas were as much as 27 degrees higher than rural areas on a single day.

Cities by their nature generate heat.

“They have more densely crowded structures,” said Alyson Kenward, senior scientist and research director of Climate Central. “They use all these materials that hold in heat like concrete and asphalt, and dark roofs on buildings.

“And they have people running machines, and cars generating heat, and power plants releasing hot air, and air conditioners running.”

The trend toward hotter cities is deadly serious. According to the National Weather Service, heat is the No. 1 weather-related cause of death in the U.S.

The Nature Conservancy estimates that 12,000 people worldwide die every year because of heat, and the World Health Organization predicts that 250,000 a year could die from heat by 2050 unless cities adapt.

“What kills people is when you have a period of normal temperatures and then all of the sudden it’s hot for an extended time. It comes as a surprise,” said Rob McDonald, lead scientist for the Global Cities project of the Nature Conservancy.

Even cities in northern climates must deal with the repercussions of extended high temperatures, he said. The city of Toronto, for instance, is thinking about how to mitigate heat because much of its senior citizens housing is in tall buildings with no air conditioning. “You wouldn’t think Toronto would have to worry about it,” he said.

Trees affect heat in several ways. Their shade keeps asphalt and concrete from getting as hot. They emit moisture to keep the air cool. And they soak in air pollutants and “breathe out” clean air.

That can affect the incidences of asthma, too, McDonald said. “There’s a very clear link between poor air quality and asthma, and a clear link between trees and reduced asthma,” he said. “Trees can cut pollution and particulate matter by 10 percent to 25 percent.”

Trees aren’t always an easy answer to urban heat. Desert cities like Las Vegas and Tucson, Arizona, for instance, have a tougher time increasing their tree canopies because there is little rain to support broad-leafed deciduous trees such as oaks or maples. They have to choose drought-resistant shrubs and trees.

“Water and trees is a huge nexus for us,” said Katie Gannon, program director for Trees for Tucson, a nonprofit that has been working to improve ground cover since the late 1980s. “We’re a fairly ‘wet’ desert; we get rainfall in the winter as well as summer.” But the city has had to be come “expert at water harvesting.”

The city’s mayor, Democrat Jonathan Rothschild, set a goal of planting 10,000 trees, and progress is being made, she said.

Las Vegas, No. 1 on Climate Central’s list of hottest urban heat islands, gets only four inches of rain a year, said Marco Velotta, a city planner with the Las Vegas Office of Sustainability.

The city also has Lake Mead to the east, so “we’re like a donut hole situation,” he said. The part of the city near Lake Mead is cool, but downtown is hot. The city’s goal is to increase its tree canopy from its current 14-15 percent to 20 percent by 2035, and it’s planting native trees and shrubs and those that don’t use a lot of water to do that.

“The trick is balancing water consumption with the species to provide a good canopy,” Velotta said.

Trees Not the Only Answer

As U.S. and world populations move to cities, the issue of urban heat will become more important.

Trees are just part of the equation for cooling off hot cities, said Greg Kats, founder of Capital E, a national clean energy venture capital firm, who also helped develop the LEED system to rate “green buildings” for their energy- and water-saving characteristics.

“Green building has really taken off,” he said. “Every large city in the country has preferences for new construction to be green.”

New technology, such as glass for windows that darkens during bright sunlight and lightens when days get gray, is part of the future of urban building design, Kats said. Cities like Washington, D.C., are starting to experiment with these measures.

Last fall, 120 trees were planted along Broadway in Louisville’s downtown, and the goal is a 45 percent tree canopy for the entire metro area, said Koetter of the Office of Sustainability. That means tree foliage will cover 45 percent of the city and suburbs. The area has a 37 percent canopy now, and it’s been falling as ice storms, windstorms and tree age have toppled shade trees.

The city also is facing an invasion of the emerald ash bore beetle, which was first discovered in southeast Michigan near Detroit in 2002. It was found in Louisville in 2009. The beetles are native to China and are an invasive species in the U.S. They have destroyed hundreds of millions of ash trees across the country already, according to Michigan State University’s Emerald Ash Bore Information Network.

“It’s alarming,” said Cindi Sullivan, executive director of TreesLouisville, a nonprofit that works with local governments and other groups to plant trees. “We could be looking at a canopy of 20 percent in a few years.”

But it won’t be for not trying.

The city of Louisville doubled the money it will spend on trees this year to $500,000 and 6,250 trees will be planted, especially in low-income areas that have fewer trees and need them. The city is even giving trees away free to residents to plant in their yards.

“We have to try any strategy so we can get more trees in the ground,” Koetter said.