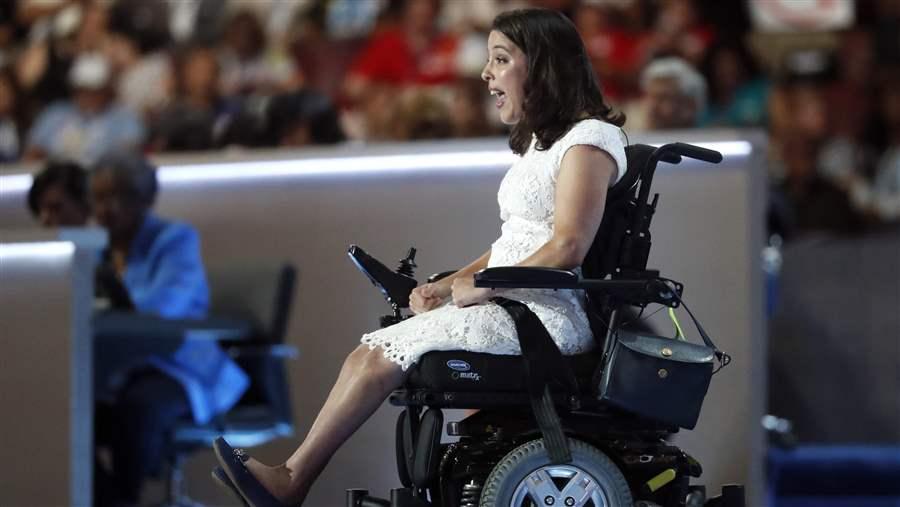 Anastasia Somoza addresses the Democratic National Convention last summer. She fears that the Republican health care bill will result in Medicaid cuts that will make it harder for disabled Americans to live independently.

The current debate over Medicaid has Anastasia Somoza thinking about the Willowbrook State School, the infamous Staten Island institution for people with developmental disabilities that New York state ordered shut down in 1983, the year Somoza was born.

After touring the facility in 1965, U.S. Sen. Robert F. Kennedy famously called it “a snake pit.” He described residents “living in filth and dirt, their clothing in rags, in rooms less comfortable and cheerful than the cages in which we put animals in a zoo.” Media investigations exposed similar conditions into the 1970s.

In recent decades, the country has shifted away from institutions like Willowbrook and toward programs that allow people like Somoza, who has cerebral palsy and spastic quadriplegia, to remain in their own homes. But she and other disability advocates worry that the Medicaid changes President Donald Trump and Republicans in Congress are contemplating might make such services less available.

In every state, Medicaid now covers at least some home- and community-based services for the disabled, including health aides, adaptive equipment and transportation. But the federal government does not require such coverage under Medicaid, as it does services such as doctor’s visits, nursing home care and laboratory tests. That means states may be tempted to drop the home-based services for the disabled first if federal Medicaid money dwindles and they have to find savings.

Those services have helped Somoza earn a graduate degree, hold down a job, and live independently in her family’s home in New York with her elderly parents and twin sister, Alba, who has the same disabilities. Earlier this month, Somoza told the audience at a Washington conference that she is “extremely frightened about the potential cutbacks.”

“Without Medicaid, I wouldn’t be able to have the in-home services that allow somebody to help me get up in the morning, shower, get dressed, and perform all of my activities of daily living,” said Somoza, who spoke at the Democratic National Convention last summer.

About 10.9 million disabled people were on Medicaid in 2014, 14 percent of the total enrollment.

In response to disability rights activism, Congress authorized Medicaid to begin offering home- and community-based services for the disabled in 1982. In 2014, the most recent year for which numbers are available, Medicaid spent a total of $80.6 billion in federal and state funds on home- and community-based services, more than half of its total spending on long-term care.

Republican backers of Medicaid cuts have not specifically addressed the potential impact on the disabled. They say their goal is to give states more control over their Medicaid programs to spark innovation and cut costs, either by giving each state a set amount of money for Medicaid expenditures — so-called block grants — or by capping per capita spending.

Michael Cannon, a health policy expert at the libertarian Cato Institute, acknowledged that the per capita system included in the GOP’s American Health Care Act, the proposed replacement for the Affordable Care Act, might result in cuts to home-based services for the disabled.

But Cannon also suggested that states might find ways to continue providing such services. They could, for example, recruit more young and healthy people into their Medicaid programs. Since such people would cost less to cover, states could use the savings for other purposes.

“States have always gamed Medicaid to maximize federal dollars coming in,” he said. “That happened under the ACA and it would happen under this plan.”

Robert Graboyes, a health care expert at George Mason University’s Mercatus Center, a market-based policy research group, said the Republican plan is built on the theory that “the states would have a better fix on what works for their populations than the federal government does.”

The fears among advocates for the disabled are well-founded, he said. But, he said, Republicans could change “what services are mandatory and what are optional,” which could make a great difference to those with disabilities.

The Medicaid piece of the Republican health care plan represents a fundamental change in financing Medicaid.

Since its creation in 1965, Medicaid has been an open-ended entitlement, meaning that anybody who meets the eligibility requirements can receive benefits. A shift to block grants or a per capita system, as envisioned in the current proposal, would lead to less federal spending. This week, the nonpartisan Congressional Budget Office projected that the changes in the American Health Care Act would reduce federal Medicaid spending by $880 billion over the next decade.

In many states, there already are waiting lists for disabled Medicaid beneficiaries who want home-based services. “These programs are large and already resource scarce,” said Dan Berland, director of federal policy for the National Association of State Directors of Developmental Disabilities Services. “It’s a fantasy that states will make up for dwindling federal funds.”

Berland also said the proposed Medicaid cuts, combined with the end of ACA subsidies for the purchase of private insurance, might cause some of the low-paid aides who work with the disabled, who rely on such help for their own health care, to seek higher-paying jobs elsewhere.

Matt Salo, executive director of the National Association of Medicaid Directors, emphasized that there is still a lot of uncertainty swirling around the future of Medicaid and coverage of home-based services for the disabled. Salo suggested, for example, that Congress or the Centers for Medicare and Medicaid Services might make such coverage mandatory. Or states could change eligibility requirements under Medicaid, keeping the disabled on the rolls while pushing others off.

He noted that the Republican bill allows for higher per capita caps for disabled people on Medicaid, but there’s nothing in the legislation that requires states to apportion that money along those lines. “There’s unfortunately a lot that we simply don’t know right now,” Salo said.

That uncertainty is terrifying to many of the disabled and their families. Somoza, for example, said that without the health aide she and her sister share, they might not be able to continue to live at home with their elderly parents. The aide, Somoza said, helps them get washed and dressed in the morning, prepares meals for them, drives them to and from work and gets them ready for bed.

“That personal care is literally life or death to many of us,” she said.