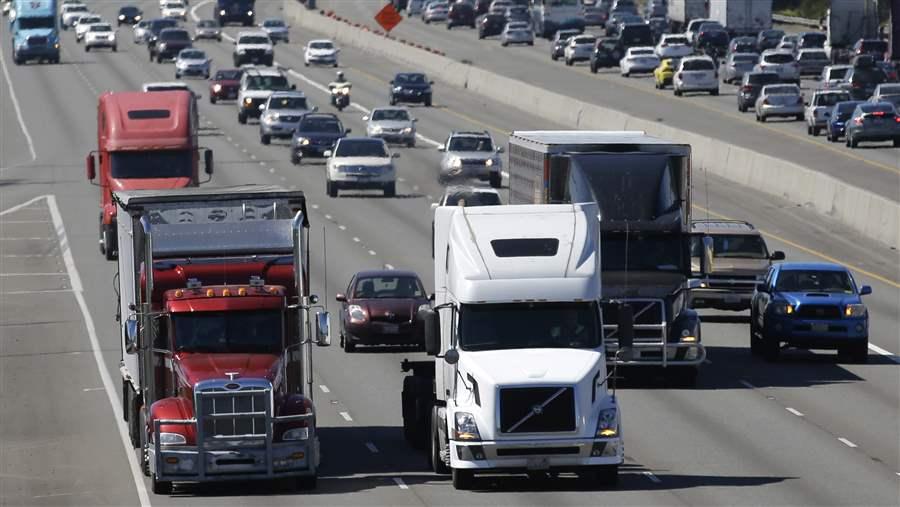 Traffic on Interstate 5, headed north through Fife, Washington. Washington is one of many states where lawmakers have considered fining “slowpoke” drivers who piddle in passing lanes.

Maybe you’re a bit of a lead-foot. Maybe you don’t like driving behind trucks. Or maybe you just really like the view from the left lane. Well, an increasing number of states have a message for you: Get over. Or pay up.

Oklahoma, Oregon and Virginia are racing to become the latest in a wave of states that have imposed higher fines and more restrictions on driving in the left lane of multilane highways. The crackdown is an attempt to enforce what legislators say drivers should already know: the far left lane of a highway is for passing, and only passing.

Since 2013, at least five other states — Florida, Georgia, Indiana, New Jersey and Tennessee — have also stiffened penalties for “slowpoke” driving or “left-lane camping.” While all states require slow vehicles to keep right, they do not all specifically require drivers to get out of the left lane after overtaking another motorist or set penalties for failing to do so.

“Left-lane cruisers, besides being dangerously oblivious to the other drivers around them, are annoying as heck,” said Kaye Kory, the Democratic Virginia state delegate who co-sponsored the legislation in her state.

Her bill, written to take effect during summer vacation traffic in July, was passed by the House with a $250 fine for left-lane motorists driving slower “than the normal speed of traffic” and for drivers staying in the left lane when they are not passing another vehicle. But Democratic Gov. Terry McAuliffe wanted the fine reduced to $100, which Kory agreed to.

In Oregon, the bill now making its way through the Legislature would impose a $250 fine for driving in the left lane except when passing.

“People who hog the left lane lead to road rage and frustration, tailgating, passing on the right,” said Senate Majority Leader Ginny Burdick, a Democrat who previously championed Oregon’s ban on using hand-held cellphones while driving. “All of these are unsafe behaviors.”

“I can’t tell you how many people come up to me from all walks of life, including ‘gun nuts’ who are just totally opposed to everything I’m doing on guns and say, ‘I hate everything you’re doing on guns but I love your left-lane bill,’ ” Burdick said.

But the measures aren’t always popular enough to become law. Since 2015, left-lane bills have been proposed in Mississippi, North Carolina and Ohio without winning approval. Questions remain about whether they really work to improve highway safety.

Burdick said stricter left-lane laws are needed in part because traffic fatalities are on the rise. Traffic fatalities have increased sharply: in 2015, traffic deaths rose by 7.2 percent over the year before, the largest jump in 50 years, according to the National Highway Traffic Safety Administration. Traffic deaths rose 8 percent in the first nine months of 2016 over the first nine months of 2015, the agency estimates.

Traffic safety experts say there’s no specific research on the danger of left-lane driving. Speed and distracted driving, by contrast, are clearly identified threats to safety.

“It is not something that comes to the top of the list when it comes to traffic safety concerns,” said Andrea Bill, traffic safety engineer research program manager at the University of Wisconsin Traffic Operations and Safety Laboratory.

“I have not seen any research that says that hogging the left lane is a major safety issue,” said Charles Farmer, vice president of research and statistical services at the Insurance Institute for Highway Safety, a nonprofit research group funded by the auto insurance industry. “We definitely know that speeding is a major safety issue. The evidence is overwhelming on that.”

States have been raising speed limits in recent years. The national 55 mph speed limit, enacted in 1973 during a fuel crisis, was officially repealed in 1995, by which time many states had already raised the speed limit to 65 mph.

Now, Hawaii and Washington, D.C., are the only places where the maximum speed limit is less than 65 mph. Eleven states still have a top speed limit of 65 mph, and 38 states have higher speed limits on some roads. A handful of western states have an 80 mph limit. Texas has an 85 mph limit.

Legislators and police say that the danger of left-lane lingering is obvious. In Oregon, for instance, state police list “lane usage” as one of five main factors leading to serious injuries and fatal crashes. The others are speed, impaired driving, distracted driving and “occupant safety,” for example wearing seat belts.

Proponents of left-lane laws argue that slowpoke drivers cause unnecessary lane changing as faster traffic weaves around to pass on the right.

But the underlying problem is still speed, Farmer said. “Lane changing is a problem if you’re going too fast,” he said. “At normal speeds, and if you’re careful and you’re looking out, it’s not a problem. That’s why we have multilane highways.”

Regardless of whether it is dangerous, left-lane driving impedes the smooth flow of traffic — and for commuters on often overcrowded roads, that is infuriating. Being a “left lane hog,” as Burdick calls it, has been among the top five most annoying driver behaviors for two years according to a survey commissioned by the travel booking site Expedia.

“Road rage is a very real phenomenon that is exacerbated by the increasing congestion on our major roads and highways,” she said. “Curbing left-lane cruising is a step towards smoothing the flow of traffic and reducing likely instances of road rage.”

In Washington state, Democratic Sen. Guy Palumbo introduced a left-lane bill after he was elected last year and started driving 80 miles to the state capital, Olympia, from his home in Snohomish. He saw plenty of left-lane drivers holding up traffic, he said. “They’re affecting mobility and they’re causing congestion where there doesn’t need to be.”

His bill died in committee, but Palumbo says he’ll try again. “It’s not a panacea by any means,” he said of the bill. “But if people drove like they were trained to drive in drivers ed, we would have less traffic because people would get out of the way.”

Just drawing attention to left-lane road hogging can have beneficial results, some advocates of cracking down on the practice say.

In Michigan, 1st Lt. Chris McIntire, a state police post commander, has launched a two-month crackdown on left-lane drivers. A similar initiative last year, in four counties, resulted in 639 traffic stops and 56 tickets. Fines are set by the jurisdiction’s court and not by the state, but McIntire estimates they are about $100.

“It causes accidents, but one of the biggest things we see is it causes road rage,” he said of left-lane lingerers. “Right or wrong,” he said, “people are traveling faster than they are and they [the speeders] get mad.”

The crackdown last year was largely to educate drivers about staying out of the left lane except when passing, McIntire said. “We weren’t writing a lot of tickets unless it was so egregious we had to.” But, he said, the state police did get fewer calls from furious drivers reporting left-lane lingerers.

Burdick, the Oregon state senator, said she noticed a similar drop during two previous attempts to pass a “left-lane hog” bill, thanks to media coverage of the proposal. “I would notice an improvement. I think a lot of the value of this is educational,” she said. “People know: Hey, we’re on to you.”

In Indiana, which in 2015 passed a slowpoke law with a maximum fine of $500, warnings far outpace citations: 2,448 to 165 since July 2015. But the warnings have an effect, said Indiana State Police spokesman 1st Sgt. Richard Myers.

“Anytime someone is stopped, issued a ticket or warning, and given an explanation of the violation, we as law enforcement officials are educating the public — which in turn reduces accidents, congestion and road rage incidents,” Myers said.

Educating drivers on what is acceptable highway driving behavior can sometimes be as important as legislation, said Rich Jacobs, spokesman for Drive Smart Virginia, an insurance industry-funded safety advocacy group. His group has not taken a position on the Virginia left-lane bill and has instead focused, so far unsuccessfully, on stricter laws on distracted and impaired driving.

“You can’t just legislate it, you’ve also got to shift public opinion,” he said. “That’s the challenge.”