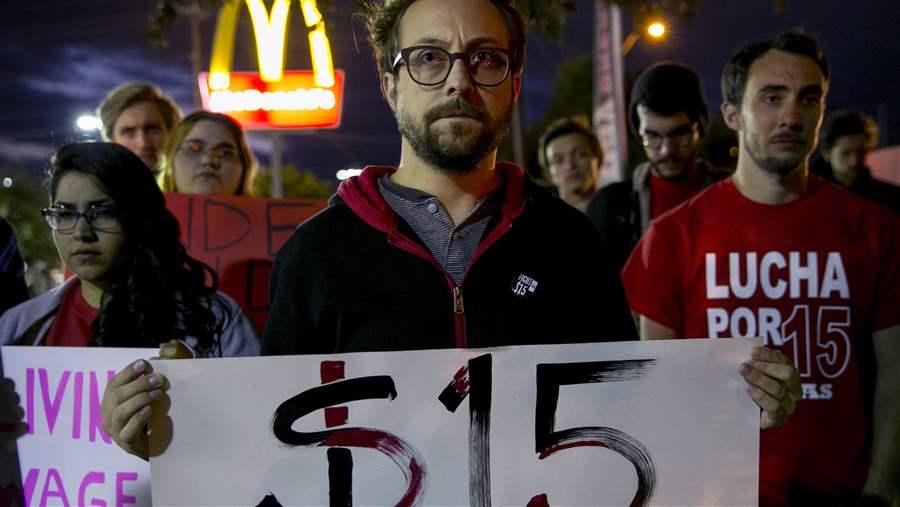 A demonstration in support of striking fast-food workers at a McDonald's restaurant in Austin, Texas. The parent companies of large chains don’t want to be responsible for the wage and hour and antidiscrimination complaints of workers in individual franchises.

For two years now, Jeff Hanscom has been traveling to state capitols and pitching lawmakers on a simple, if technical, idea: pass a law that says the state won’t consider the people who work at franchises — think McDonald’s cashiers or trainers at Gold’s Gym — to be employed by the franchiser.

Hanscom is a lobbyist for the International Franchise Association, a business group fighting an Obama-era definition of “employers” that could have big consequences for companies that rely on franchising, contract workers or temporary staff.

His efforts are paying off. Since 2015, 10 states have passed laws that guarantee, with some exceptions, that parent companies won’t be held responsible for franchise owners or workers under state wage and hour and antidiscrimination laws. Similar bills are currently pending in 11 other states.

A growing number of workers are in an employment relationship that involves three parties. Franchises from Hilton to Burger King to Planet Fitness employ about 7.6 million people across the country. An additional 4.7 percent of U.S. workers are employed by temporary help agencies or firms that contract out their labor.

Under President Barack Obama, the National Labor Relations Board (NLRB) — which defends employees’ right to form a union — argued that employers who have indirect, potential control over workers should be considered “joint employers” of those workers under federal law.

This line of thinking may not hold up in court and will likely be reversed under President Donald Trump. But it still sent a tremor through the franchising industry. If it were easier to call franchisers joint employers, it would be easier for franchisee workers to unionize across establishments and to sue their parent company over wage and hour issues. The added liability could undermine the whole franchising business model.

Business groups are trying to get additional legal security by making sure the broader standard won’t apply under state law. “To all of a sudden say that franchisers are on the hook, or legally responsible, for the employment relationship between a franchisee and his or her employees would be inserting a level [of control] that doesn’t exist,” Hanscom said.

Critics of the industry-driven state laws say they’re not likely to achieve much, because workers can still sue under federal law.

And those who favor the Obama administration’s thinking on joint employment say it updates labor law to suit the modern economy. Regulators and policymakers — at the state and federal level — have to grapple with the growth of nontraditional employment relationships, says David Weil, the former administrator for the Department of Labor’s Wage and Hour Division. “Regardless of who’s in the White House, these changes have happened and continue to spread,” he said. 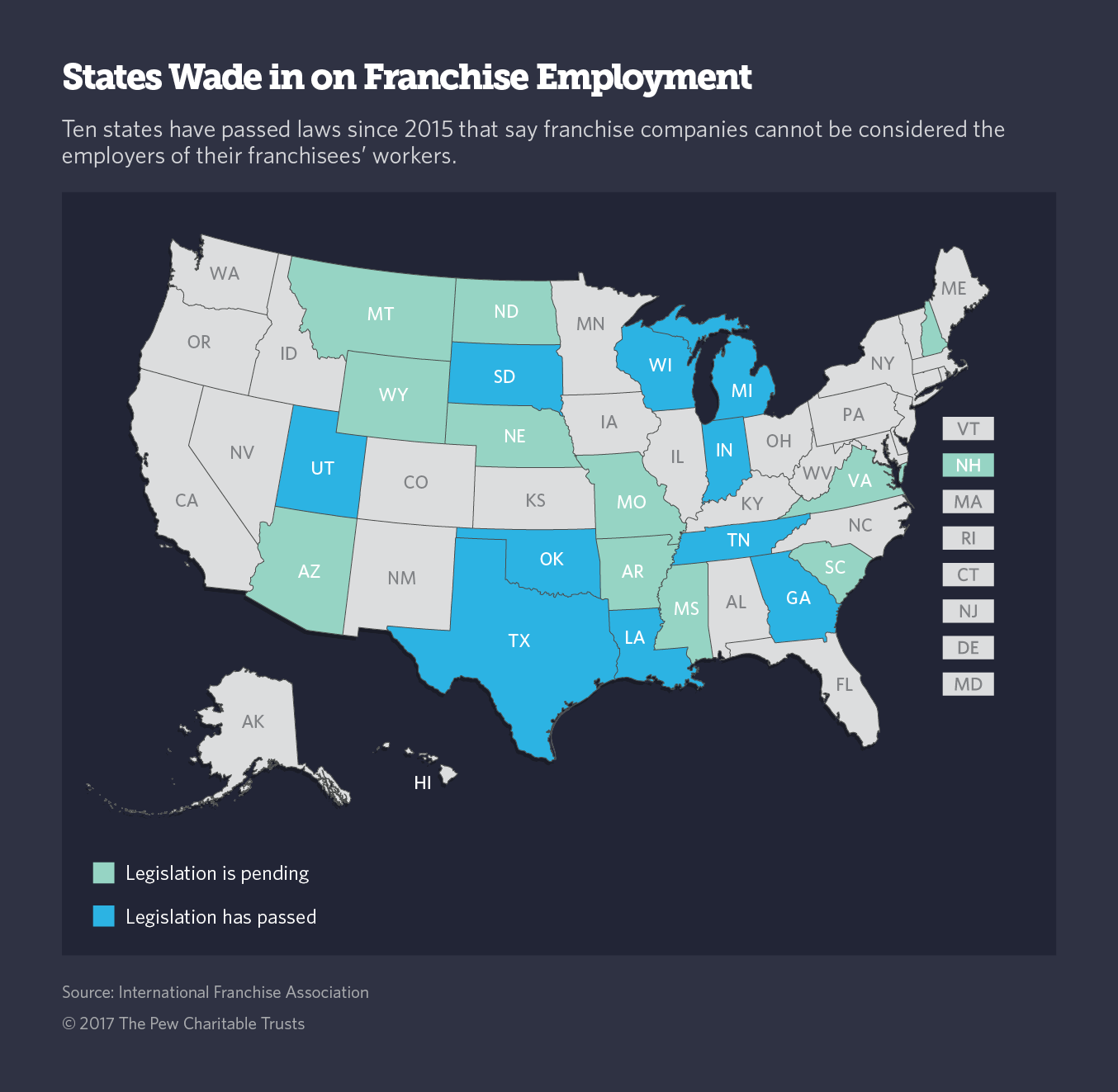 Federal law defines “employers” broadly and slightly differently depending on the statute. The Obama administration didn’t change existing law. But in 2016, the Department of Labor issued an updated legal interpretation of how federal wage and hour law defines joint employers. And in 2015, the NLRB, which was controlled by Democrats, issued a decision that broadened the definition under collective bargaining law.

Since 1985, entities have had to actively hire, fire and supervise workers to be considered a joint employer under federal law. The 2015 NLRB decision was a throwback to the broader definition of joint employers that dominated labor law until 1985. In a legal brief, the office of NLRB’s general counsel, Richard Griffin, argued that the traditional standard was legally correct and more appropriate for the modern workforce.

“One of the types of situations we say calls out for the more traditional use of the joint-employer standard is the current contingent workforce situation — with temp agencies that provide people not for a day, not for two days, but frequently three or four years,” Griffin said in a 2014 speech to law students.

In his speech, Griffin noted that the relationship between franchisers and franchisees is a special case. Franchisers have to exert some control over their franchisees in order to protect their trademark and brand. A Domino’s Pizza in Singapore has to be more or less the same as one in St. Louis. So some parent companies dictate everything from prices and menus to how establishments look and workers dress.

The board has long ruled that steps taken to protect a brand don’t trigger employer responsibilities. But, Griffin said, some franchisers do exert employer-like control over franchisee workers.

Exhibit A, for supporters of a broader definition of joint employers, is a mega-case against McDonald’s that began in 2012 and is still pending before the NLRB. The board’s lawyers argue that the fast food giant’s strict contracts, scheduling software and centralized response to minimum wage protests show that it’s crossing a line and acting like an employer. McDonald’s strongly denies this argument.

Weil, the former Labor Department official, says that some franchises today have such a convoluted management structure that it’s hard to tell who’s employing who. Investors might buy a hotel franchise and hire a third-party manager to run it. The manager might then contract out the daily work of checking in guests and cleaning rooms to other subcontractors and staffing agencies.

Under Weil’s leadership, the department put out guidance that defined two forms of business structure that can be considered joint employment. Weil says the guidance did not include new policy, but merely interpreted existing law. It was nevertheless loudly protested by industry groups who complained that it was confusing and hadn’t been made with sufficient outreach. “I think they oversimplified what we were saying,” Weil said.

Going to the States

For Wyoming state Sen. Ogden Driskill, a Republican, federal wrangling over the definition of employer is personal. He and his wife operate a Kampgrounds of America campground franchise on their land near the Devils Tower national monument. “It’s a wonderful program for us,” he said of the franchise agreement.

When the state lodging and restaurant association approached him about the need to give the state’s franchisers and franchisees certainty about their employer responsibilities, it was an easy sell. The bill Driskill sponsored is short — less than 150 words — and it’s currently sitting on Republican Gov. Matt Mead’s desk awaiting his signature.

Driskill says there’s no corporate meddling in his business. His parent company provides a reservation system and visits periodically to assess the quality of the campground — and that’s about it. “The labor relations board is blurring the line between corporate and franchisee,” he said.

The franchising industry, backed by the Chamber of Commerce and other partners, has been slowly winning support for similar legislation nationwide. The laws also put the brakes on joint-employer lawsuits brought by the state itself. Last year, New York’s attorney general, Eric Schneiderman, a Democrat, sued Domino’s Pizza along with three franchisees for knowingly underpaying workers.

Hanscom says the state push is part of a long-term strategy to write the industry-friendly, narrower definition of joint employer into federal law. “It also helps at the federal level to point to all the action states are taking,” Hanscom said. Tennessee Sen. Lamar Alexander and Minnesota Rep. John Kline — both Republicans — tried and failed to pass a law in 2015 that would have done just that.

Unions aren’t happy with the franchise industry’s push. “They’re trying to build a legal framework to get out from joint-employer responsibilities,” said David Rolf, a Service Employees International Union leader and founder of the Fight for $15 campaign to raise the minimum wage.

With Trump in the White House and business-friendly Republicans dominating Congress, it’s likely that in a year or so the NLRB will have new appointees who don’t agree with the joint-employer standard described in the Browning-Ferris Industries decision. Trump’s Department of Labor will likely be less aggressive in going after joint-employer cases. And Congress is more likely to pass legislation like the bill Alexander and Kline proposed.

But legal experts caution that it could take years for new members of the labor board to be appointed, consider a similar case, and make a decision based on it. The Department of Labor still doesn’t have a secretary. And with Congress currently embroiled in a major fight over health care policy, there’s no telling if or when lawmakers might turn their attention to the joint-employer issue.

“Nothing’s going to happen in the short term at the federal level,” said Chris Wilkinson, a partner at Orrick and former senior civil rights and labor management lawyer for the Department of Labor.

Protests, complaints and lawsuits from unions and dissatisfied workers in complex employment situations are likely to continue. “There are more workers in joint-employment relationships that are interested in pushing back on the low wages and substandard conditions that exist,” said Harris Freeman, a professor at Western New England University School of Law.

And the reasons the Obama administration chose to broaden the joint-employer standard aren’t going away, either. “This is one of a larger set of issues about how the workforce has been transformed over the last few decades,” Weil said. If federal and state policymakers don’t keep up with changing employment relationships, he said, they risk leaving many low-wage workers unprotected.