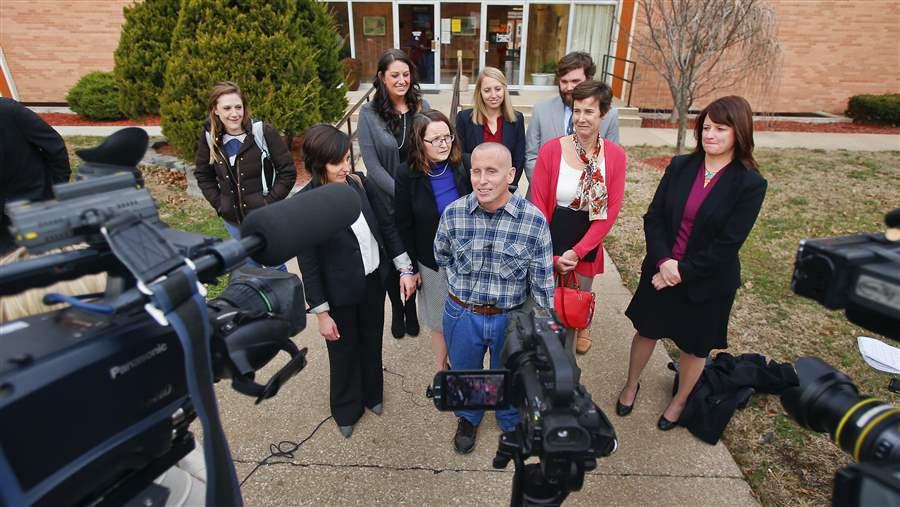 Floyd Bledsoe, center, after walking out of the Oskaloosa, Kansas, courthouse a free man in December 2015, after new evidence showed he was wrongly convicted of murder in 2000. Many states, including Kansas, are trying to figure out what people like Bledsoe are owed for the time they spent behind bars.

In April 2000, 23-year-old Floyd Bledsoe sat in an Oskaloosa, Kansas, courtroom awaiting the verdict in his first-degree murder trial in the death of his 14-year-old sister-in-law, Zetta “Camille” Arfmann. Throughout the trial, he maintained his innocence. But the jury entered the courtroom and declared him guilty.

Bledsoe was sentenced to life in prison plus 16 years, but doubts about his involvement in the murder lingered. The crime scene yielded little physical evidence, and Bledsoe’s brother, Tom, 25, had originally confessed to the murder before recanting and pinning the crime on Floyd.

After years of fruitless court challenges, Bledsoe was vindicated in a gut-wrenching twist: In 2015, Tom Bledsoe confessed to the murder in a suicide note before asphyxiating himself. Within a month, a judge vacated Bledsoe’s conviction and he was released from prison. The day of his release, Bledsoe recalls, was a mixture of celebration and mourning.

“Before I was locked up, I had 40 acres, livestock, a wife and kids,” he said. “When I was released, I had nothing … I lost my family, my job, my reputation — everything.”

Bledsoe found little support as he adjusted to life outside of prison, including from the state that locked him up for more than 15 years. A bill before the Kansas Legislature would make up for part of that by making him eligible for $80,000 for each year he spent behind bars.

A steady increase in exonerations in recent years, often a result of new DNA-testing capability, has prompted lawmakers in states like Kansas to consider legislation that guarantees compensation for those who are wrongfully convicted and imprisoned. And in the 32 states that have compensation laws, some lawmakers have sought to increase the amount of compensation exonerated individuals would receive, expand the eligibility for compensation or streamline the process for getting it.

“When an innocent person is deprived of liberty because of a wrongful conviction, regardless of fault, the government has a responsibility to do all it can to foster that person’s re-entry in order to help restore some sense of justice,” said Maddy deLone, executive director of the Innocence Project, a nonprofit legal organization that specializes in wrongful conviction cases. “Fair compensation is part of that.”

According to the National Registry of Exonerations, 2,000 wrongfully convicted individuals have been exonerated for state and federal crimes since 1989. In 2016, there were 166 exonerations nationwide — the most since the registry was established nearly 30 years ago.

From state to state, however, those who are exonerated are not guaranteed the same rights or compensation after a conviction is overturned. “It really matters where you’re convicted,” said Amol Sinha, state policy advocate at the Innocence Project.

In Texas, a state known for its tough-on-crime posture, the exonerated are paid $80,000 for every year spent in prison and are eligible for monthly annuity payments after release. The state’s generous compensation law has added up over time. In the last 25 years, Texas has paid over $93 million to wrongfully convicted individuals.

Wisconsin, on the other hand, pays $5,000 for every year spent in prison, capped at a maximum of $25,000. Some states offer in-kind benefits in addition to monetary compensation. Vermont, for example, provides health care coverage for 10 years after an exonerated individual is released from prison.

In states without compensation laws, like Kansas, those who are exonerated typically have to file a lawsuit to get compensation or convince legislatures to pass a special appropriation to pay them. Lawsuits can be time-consuming, costly and challenging to win. And winning compensation from a legislature isn’t guaranteed.

In Kansas, for example, a wrongfully convicted person currently must go to the Legislature’s Special Claims Against the State Committee and plead for compensation.

How much people deserve for the time they lost behind bars often is in dispute. It was in Indiana this year.

Both bills would award compensation only to people whose crimes were vacated through DNA analysis. The attorney general would be in charge of processing claims for wrongful conviction compensation, and neither bill would apply retroactively. But both bills appear dead for the year.

Frances Lee Watson, founder of the Wrongful Conviction Clinic at the Indiana University McKinney School of Law, said she hopes legislators will continue to push for compensation. “Convictions are still being vacated and people are still being exonerated in Indiana — but we don’t have a compensation law,” she said.

Another sticking point in trying to pass compensation laws is overcoming lawmakers’ general faith in the criminal justice system or convincing them that innocent people can be convicted.

In nearby Michigan, Republican Gov. Rick Snyder signed a bill in December that pays $50,000 for each year of wrongful imprisonment and provides re-entry services after release. But the bill’s sponsor, Democratic Sen. Steve Bieda, first introduced it in 2004.

“I think [legislators] had a hard time wrapping their heads around the fact that someone could spend so much time behind bars and not have done something wrong,” Bieda said of his struggle to pass the bill. “I had to reintroduce [the legislation] again and again.”

Lawmakers in other states are looking to tweak their compensation laws by streamlining payments or ensuring that some people aren’t left out unfairly.

In Tennessee, for instance, Republican Rep. Mark Pody wants to make it easier for people who are innocent, but aren’t exonerated by the state’s parole board or the governor, to receive compensation. Why? A judge vacating a conviction is not enough for an individual to qualify for compensation under current law.

His bill would allow a wrongfully convicted individual to apply for compensation without an official exoneration after spending at least 25 years in prison and if the conviction was overturned by DNA evidence.

The bill wouldn’t affect many people in Tennessee. But it would affect Lawrence McKinney, who was released from prison in July 2009 after 31 years based on new DNA evidence. McKinney was denied an official exoneration from the parole board and is currently awaiting a decision from Republican Gov. Bill Haslam.

After spending time on the Kansas Legislature’s joint committee that decides on civil claims for wrongful conviction, Democratic Sen. David Haley decided he wanted to change how innocent people such as Floyd Bledsoe are compensated in his state to make it more just and evenhanded.

“Some [people] made compelling arguments,” he said, “but there seemed to be no rhyme or reason as to who [was awarded] what.”

So last month, he introduced a bill that would compensate wrongfully convicted individuals with $80,000 for each year spent in prison or $1 million if sentenced to death. It would also pay $5 million to the heir of an individual who was wrongfully executed, though the state hasn’t conducted an execution since 1965.

The bill hasn’t passed yet. There are questions about whether $80,000 is the right amount. And the bill has been amended to include some notable limitations: Individuals who pleaded guilty or no contest to a crime, for example, would not be eligible for compensation — even if the conviction was later vacated.

Sinha of the Innocence Project said provisions like this in compensation laws can deprive some innocent people of their rightful compensation because they were coerced, or saw little hope in winning at trial and agreed to a plea bargain.

The National Registry of Exonerations has confirmed over 350 instances of individuals who pleaded guilty to crimes they did not commit. According to the Innocence Project, nearly 11 percent of the nation’s DNA exonerations involved innocent people pleading guilty.

Haley’s bill in Kansas also would require people who are exonerated to apply for compensation within two years after their release from prison. That would exclude the bulk of people whose convictions have been vacated.

Bledsoe, whose brother committed the murder he spent time in prison for, doesn’t want to be one of those people. But time is running out for him to get the level of compensation Haley thinks he deserves. Dec. 8 will mark two years since his release from prison.

“I haven’t completely lost faith in our justice system,” Bledsoe said. “[But] it’s hard to trust in something that’s not perfect.”