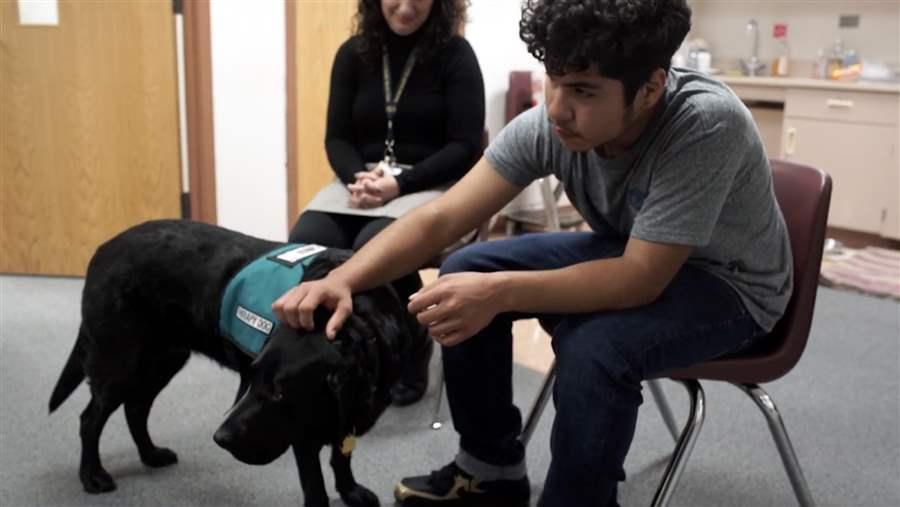 Amanda Ingram, a drug and alcohol therapist, talks to a student at Bruce Randolph School in Denver. Therapists and pediatricians are increasingly voicing their concerns about marijuana’s effects on the developing brain.

Students sign up to visit Ingram during breaks in classes to talk about family and social troubles while they play with the big black Labrador retriever lolling at her feet. “With Pauletta here, they don’t have to look at me,” Ingram said. “It makes it easier for them to talk about uncomfortable issues.”

But one issue they rarely talk directly about is their marijuana use, although Ingram is a drug and alcohol counselor. “They’re teenagers,” she said. “If I told them they needed to cut back or quit using pot, they’d never do it. And they probably wouldn’t come back.”

As marijuana legalization sweeps the nation, physicians and public health officials are sounding alarms about its potentially harmful effects on young people. And counselors like Ingram are trying different approaches to address and treat use and addiction among adolescents.

Dr. Christian Thurstone, a pediatric addiction psychiatrist at Denver Health Medical Center who treats teens and works with Ingram and other counselors in six local high schools, sees a link between growing addiction to marijuana among teens and the state’s decision to make it legal — even though there are no indications more Colorado teens are using it.

Since the state allowed private companies to market and sell medical marijuana in 2010, the number of adolescents coming to Denver Health seeking treatment for marijuana dependence has doubled, he said.

Thurstone, an adviser to Colorado’s public health department on marijuana policy and an outspoken opponent of legalization, said that even if the number of teens using marijuana has remained the same, the number seeking treatment for their addiction and the severity of their symptoms has increased dramatically.

But the good news is that treatment for marijuana addiction in adolescence works, Thurstone said. “We just need more of it.” Nationwide, only one in 10 people with an addiction seek treatment. “We’re just scratching the surface, but we may be doing better than one in 10,” he said. 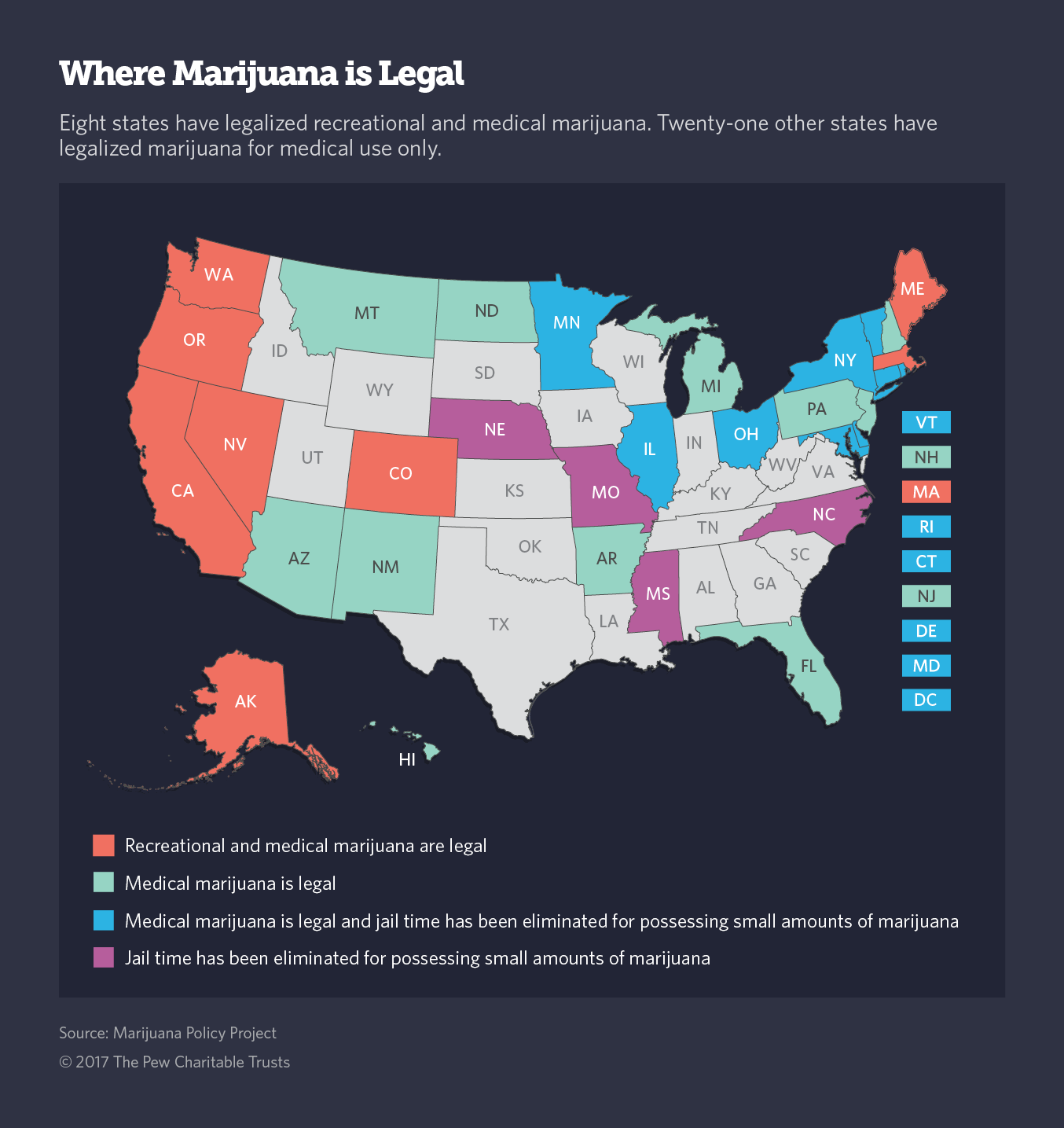 Before states began legalizing it, marijuana was the most commonly used illicit drug in the country. And its use here in Colorado was more common than in most places, said Judith Shlay, interim director of Denver Public Health.

In 2014, 22.2 million Americans aged 12 or older were current marijuana users, with more men than women using it, and more adolescents using it than any other age group.

About 9 percent of all marijuana users become addicted and that number increases to 17 percent among users who start young, according to the National Institute on Drug Abuse. The rate of addiction jumps to 25 percent among daily users.

No death from a marijuana overdose has been recorded, according to the U.S. Drug Enforcement Administration. And withdrawal symptoms, including irritability, sleeplessness, decreased appetite, anxiety and drug craving, are mild compared to those associated with opioids, cocaine and other illicit drugs.

But the effects of addiction on adolescents can be profound. Teenagers who use marijuana daily often operate at a lower intellectual level than those who don’t, which makes them less likely to achieve life goals and more likely to drop out of school. Studies also show addicted teens are more likely to use other illicit drugs and attempt suicide.

Research also indicates that using pot as a teenager can have a negative effect on brain development, potentially reducing an individual’s ultimate IQ by as much as eight points. Marijuana use in adolescence also increases risk for both cardio-respiratory disease and testicular cancer, and is associated with psychiatric illness.

In February, the American Academy of Pediatrics warned that state marijuana laws “have created an environment in which marijuana increasingly is seen as acceptable, safe and therapeutic.”

The group called on pediatricians to routinely screen for marijuana use and counsel parents and kids about its potential harms. The American College of Pediatricians issued similar warnings last year.

State public health officials are also voicing concerns. Colorado and other states where marijuana is legal have crafted regulations holding dispensaries accountable for selling their products to minors, and sent out educational messages aimed at preventing kids from gaining access to marijuana.

Acceptance Up, Use Down

Surprisingly, adolescent use of marijuana appears to be shrinking even as it becomes legal in more states and worries about addiction grow.

December results from a national survey of drug use and attitudes among 8th-, 10th- and 12th-graders indicates a significant decline in marijuana use among younger adolescents and no change in use by high school seniors.

According to the annual survey — Monitoring the Future, funded by the National Institute on Drug Abuse — acceptance of marijuana has gone up among young people while its use has gone down, an anomaly the federal agency said it intends to investigate further.

A survey prepared for the Colorado public health agency called Healthy Kids Colorado revealed similarly surprising findings: no change in the percentage of high school students using the drug since recreational use was made legal in 2012. Still, at 13 percent, marijuana use among adolescents in Colorado is the highest in the nation.

As in other states, the legal age to purchase marijuana at one of the state’s more than 2,500 dispensaries is 21. So in theory, legalization shouldn’t make pot more available to young people.

But its widespread use throughout this city and state has fueled a growing public perception that the botanical drug is safe and can be therapeutic for people of all ages.

Colorado is attempting to dispel some of those perceptions through a public education campaign aimed at helping parents talk to their kids about the legal and health risks of pot use for young people, even if they use or have used the drug themselves.

If marijuana use among Colorado teens has not increased, some teens are showing a greater willingness to talk about it or to do something about it, said Carolyn Swenson, director of a drug and alcohol abuse prevention program known as SBIRT Colorado.

“School nurses tell me they’re seeing an increase in students who voluntarily seek help with their marijuana use and they seem to be the same kids that were having trouble before marijuana was legalized,” Swenson said. “The difference is that they’re more open about it now. There’s less secrecy. And they’re not hiding the reasons they feel sick.”

The concentration of THC, marijuana’s primary psychoactive component, has been increasing significantly for two decades, according to analyses of police seizures of the product.

Thurstone suspects that the higher potency of new marijuana products may be causing a higher rate of addiction and adverse health effects.

At Bruce Randolph School, there’s little mystery about why so many kids turn to marijuana or how they get their hands on it, Ingram said. The school is in the middle of five gang territories and surrounded by marijuana dispensaries.

“The kids who come in have had horrific things happen in their lives,” Ingram said. “They’ve seen people stabbed and shot to death. They’ve been victims of drug trafficking and sex trafficking and domestic violence.”

Although she seldom confronts her patients’ marijuana use head on, Ingram’s goal as a drug and alcohol counselor is to get them to quit. She said her success rate at getting them to quit marijuana completely is 65 percent. Another 18 percent reduce their use by half, and for 100 percent of her patients, mental illness symptoms go from severe to mild.

Ingram listens to their problems and, in most cases, sets up a family counseling session. Once students address often severe family and social problems, their pot use typically goes away on its own, she said. “They’d been using it to self-medicate and escape.”

The 12-week outpatient counseling program Ingram uses was developed by Thurstone at Denver Health in 2004. It starts with an assessment of drug use, health and mental illness, and includes motivational interviewing, weekly drug tests, family meetings, rewards for attendance, and treatment of underlying mental illness.

Its overall success rate at getting adolescents to quit marijuana is 50 percent, Thurstone said.