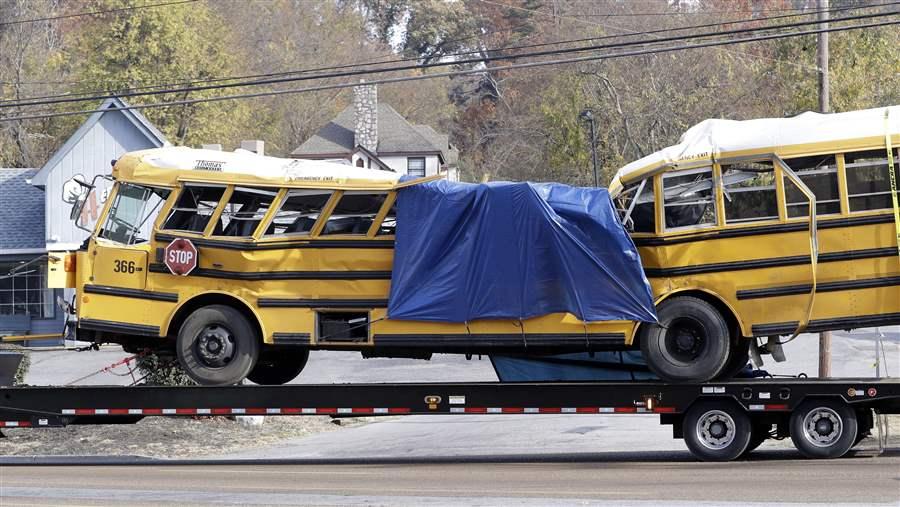 A school bus is carried away from a crash site in November in Chattanooga, Tennessee. Six elementary school students died and 31 were injured. Tennessee is one of at least 20 states in which legislators have introduced bills requiring seat belts on school buses this year.

Dawn Prescott doesn’t recall all the details of when the school bus she was riding on more than 15 years ago careened off a bridge in Omaha, Nebraska, plunged nearly 50 feet into a creek bed, and landed on its side.

She was a chaperone for the high school band, which was returning from a competition in October 2001. Her son Benjamin, 14, was sitting a few rows up, behind the driver.

“I remember that I grabbed the luggage rack and was hanging from it,” Prescott, 55, recalled. “Kids were screaming and hurt and in tangled heaps that I stepped over. All I could think of was that I had to get to my son. But when I finally did, I found he was unconscious.”

Benjamin, along with two other students and a parent, died as a result of the crash. Twenty-six passengers were injured. So was the driver, the only one on the bus who was wearing a seat belt. Seat belts weren’t required on school buses, and the bus didn’t have any for passengers.

Since then, Prescott, a middle school teacher, has been urging Nebraska lawmakers to require what she says are lifesaving seat belts on new school buses. So far, they haven’t.

But they’re considering a seat belt bill again this year, and similar legislation has been introduced in at least 19 other states, according to the National Conference of State Legislatures (NCSL). That’s far more states than usual — a change some safety experts attribute to a federal recommendation in late 2015 that school buses have seat belts.

So far, none of the bills — many of which would require that new school buses purchased after a certain date be equipped with seat belts — have been passed. And if history is any indication, many of them will fail amid questions about the seat belts’ effectiveness in preventing death and injury, and whether they are worth the cost to financially strapped school districts.

Nationwide, only six school-age passengers die in bus crashes each year, according to the National Highway Traffic Safety Administration (NHTSA).

For seat belt advocates, there’s little question what states should do. “Kids have to be on these buses, and I think we have to do everything we can to protect them,” said Connecticut state Rep. Fred Camillo, a Republican who is sponsoring a bill that would require seat belts on new buses from model year 2022 on.

Others aren’t so sure. They point to the good safety records, question whether children can quickly unbuckle and evacuate buses in some emergencies, and balk at the estimated $7,000 to $10,000 cost of adding seat belts to a new school bus already priced at $80,000 to $120,000. Retrofitting buses already on the road would cost even more.

“Nobody cares more about kids’ lives than I do. That’s my job,” said Rich Casey, transportation director for Bellevue Public Schools in Nebraska. “If I really believed school buses were unsafe with their current configuration, I would be 100 percent behind putting seat belts on school buses. But there is no scientific or empirical data that shows they would offer more protection than the current system.”

Only six states — California, Florida, Louisiana, New Jersey, New York and Texas — have laws requiring seat belts on school buses. In Louisiana and Texas, however, the requirements are contingent upon funds being appropriated by the state, and that hasn’t happened.

Safety experts agree that school buses are the safest way to transport students. Every day, about 485,000 buses carry more than 25 million children to and from school and related activities in the U.S., according to the National Association for Pupil Transportation, which represents school transportation directors.

Most of the 301 children killed in school bus crashes from 2006 to 2015 were pedestrians or occupants of other vehicles, NHTSA data show. Only 54 were bus passengers.

School buses can be equipped with one of two types of seat belts: lap belts that go over the waist or three-point lap and shoulder belts that go across the body and that experts say are much safer.

Federal law doesn’t require them on the big yellow school buses that most students ride. The buses are designed to protect riders through “compartmentalization,” structural safety features such as high, energy-absorbing seat backs and closely spaced seats so children are kept snug like eggs in a carton.

But those features don’t necessarily protect children during side-impact crashes or high-speed rollovers because passengers don’t always remain within their seating compartment, according to the National Transportation Safety Board, which recommends putting three-point seat belts on new buses.

For many years, groups such as the American Academy of Pediatrics and the National PTA recommended seat belts on every new school bus.

But NHTSA, the agency responsible for writing vehicle safety rules, maintained that large buses were adequately protected and didn’t need seat belts. Its position changed in late 2015, when then-administrator Mark Rosekind announced that “every child on every school bus should have a three-point seat belt” and that his agency was launching a nationwide effort to reach that goal.

NHTSA’s turnaround didn’t result in a federal rule mandating seat belts. But it has had an effect in state capitols, said Amanda Essex, an NCSL policy specialist.

The agency’s reversal, along with the attention paid to a major crash in Chattanooga, Tennessee, in November in which six elementary school students died and 31 were injured, has prompted more legislators than ever to file seat belt bills, Essex said.

“Typically, this issue comes up in about 10 states each year,” she said. “This year, that number has doubled.”

Bonaiuto said his group now is suggesting that if legislators want to require seat belts, they should consider creating a state fund to help pay for it, at least initially. They also should require seat belts not just on new buses but on current ones, to create the same safety standard, he said.

Despite changes in attitudes, the high cost of paying for seat belts remains a major stumbling block to adopting mandatory laws.

In Maryland, a legislative fiscal analysis this year concluded that local school systems would need to spend $23.7 million to put three-point seat belts on new school buses from 2019 through 2022.

“We’re in a very difficult budget situation in Connecticut,” said Patrice McCarthy, deputy director of the Connecticut Association of Boards of Education, which opposes the measure. “Requiring seat belts on school buses would be one more new thing where dollars would have to go.”

McCarthy said her group also worries about the costs that would stem from hiring monitors on buses to ensure young passengers stay buckled up.

Some national groups are cautious about throwing their support behind mandatory seat belt laws. The Insurance Institute for Highway Safety, a nonprofit research group funded by auto insurance companies, favors putting three-point belts on school buses and encourages school districts to do so if they have the money. But it stops short of recommending that states require them.

Jessica Jermakian, a senior research engineer at the institute, said that mandating them could have unintended consequences.

Cash-strapped school districts could put off buying new, safer buses, she said. Or they could try to save transportation dollars by changing boundaries for bus service, forcing more students to walk to school or get a ride.

“That puts children at substantially increased risk of injuries or fatalities if they walk or if their parents are driving them,” Jermakian said.

Some school transportation experts argue money would be better spent on efforts to prevent fatalities outside the school bus, which are far more common, for example putting cameras on buses to catch “fly by” drivers who illegally pass and strike children trying to cross the street.

A Hindrance to Escape?

Some opponents of mandatory seat belts on school buses also are concerned about their effectiveness during certain types of emergencies.

They worry that making children buckle up could lead to a disaster if they must evacuate quickly in a fire or the bus is submerged in water.

“Young children may not be able to unbuckle themselves without assistance, and panicked or disoriented students could be trapped by their belts,” said Danielle Batchelder, business services director for Windsor Public Schools in Connecticut, in her January testimony before a state House committee.

Utah Republican state Rep. Craig Hall, who sponsored a seat belt bill this year that failed, doesn’t buy the evacuation argument. If a bus catches fire or falls into a lake or pond, he said, it often would be the result of a crash. Seat belts can help protect passengers, leaving them in better shape to escape.

“Seat belts help in evacuations,” Hall said. “An uninjured child can evacuate much more quickly than an injured or unconscious child.”

Dawn Prescott, the Nebraska mother whose son died in the 2001 bus crash, has no doubt about the effectiveness. “If my son had a seat belt on, he would be here today,” she said.