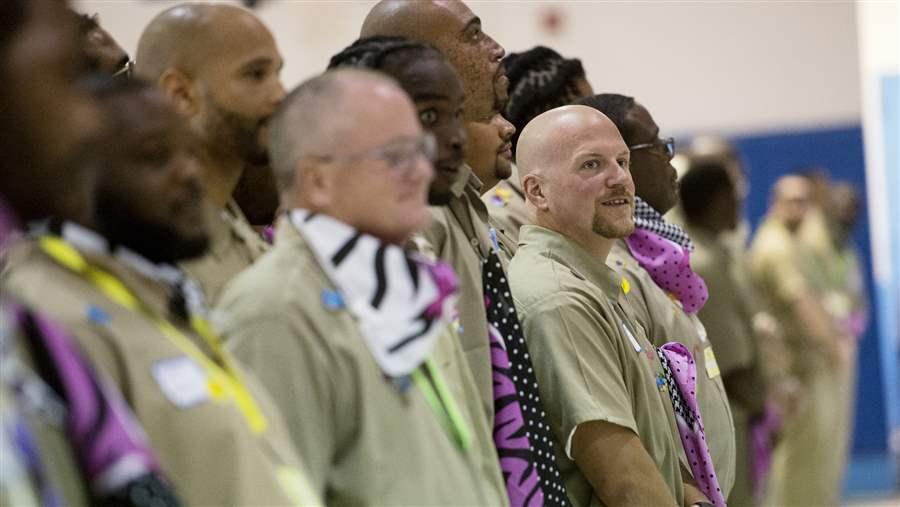 An entrepreneurship class for inmates of the Nebraska State Penitentiary. Nebraska and other states eager to connect ex-offenders with jobs are considering making it easier for people with a criminal history to get an occupational license.

Editor's note: This story has been updated to give the correct age of Robert Lewis. He is 62.

Robert Lewis didn’t think it would be hard to get a job selling insurance. He was a car salesman for decades and sold insurance for a while after graduating from college. But in Lewis’ home state of Illinois, felons can’t get a license to sell insurance. And in 1985, Lewis was arrested for felony theft.

Lewis says he long ago kicked the drug habit that contributed to his arrest, and these days the 62-year-old can often be found running around after his grandkids.

“I was a whole other person back then,” Lewis said of his Reagan-era brush with the law. But the criminal record derailed his recent job application.

In all, 118 professional, occupational and business licenses must or may be denied to felons, according to a 2012 report from the state General Assembly’s nonpartisan research unit.

Now Illinois is among a handful of states reconsidering their licensing rules and giving men and women like Lewis a chance. Although the change can make professional associations squeamish, it’s drawing support across the political spectrum as lawmakers try to get more people with criminal records into jobs.

In Kentucky, legislators included changes to licensing in a bill that would also create work-release programs at jails, reduce some probation and parole terms, and take other steps to help prisoners re-enter society. In Nebraska, a Libertarian senator has proposed rolling back licensing restrictions for all state residents — including those with criminal records — in a bid to improve conditions for businesses in the state.

“There’s now a marriage of interests,” said Lee McGrath, legislative counsel for the libertarian Institute for Justice, a nonprofit law firm. “It’s something that both sides can get their head around — it’s the great Rooseveltian idea that the best social program is a job.”

Research shows that ex-offenders who are steadily employed are less likely to get into trouble with the law again. And at a time when employers are complaining about worker shortages, men and women like Lewis can be an untapped resource.

The Safer Foundation, a Chicago-based nonprofit that helps Lewis and other felons find jobs, says that even health care employers, who have long been wary of hiring people with a criminal history, have become open to doing so. “They’re at a point where they can no longer turn away people,” said Sodiqa Williams, a vice president at the nonprofit.

States don’t generally track how many people apply for a license and get turned down because of a criminal history. But the number is potentially large.

About one in four U.S. residents — 86 million — is named in the FBI’s criminal database. Almost one in three U.S. workers need an occupational license to do their job. And a criminal record can disqualify job seekers from thousands of licensed positions nationwide.

On average, each state has 56 occupational licensing and 43 business licensing laws that ban applicants with felony convictions, according to the Alliance for a Just Society, a left-leaning network of nonprofits.

In some cases, felons are instantly disqualified. In other cases, licensing agencies and boards have leeway to consider felons under certain circumstances, such as if five years have passed since that person’s conviction, if he has good references, or if he has obtained a certificate from the state that declares him rehabilitated and ready for employment.

Nonprofits and legal service organizations that work with ex-offenders in Chicago say they don’t often work with clients who have applied for an occupational license and been rejected. Many people don’t apply because they fear being turned down, they say.

Regardless of how big the problem is, Williams says lifting licensing barriers is still an important piece of criminal justice reform because licensing can mean economic mobility. “It gives you the power to start your own company.”

Some ex-offenders who can’t get a license may end up working illegally. “We have spoken with people who wanted a certain type of job without a license, and have been paid under the table,” said Kim Buddin-Crawford of the American Civil Liberties Union of Michigan, which is also pushing for changes to licensing.

Illinois state Rep. Marcus Evans Jr. sponsored a law last year that forbade the state licensing department from disqualifying aspiring funeral directors, roofers, barbers, cosmetologists, hair braiders and nail technicians solely because of a criminal conviction — unless the conviction directly related to the job. The bill also requires licensing entities to consider mitigating factors, such as the time that’s passed since the conviction, before denying or revoking a license.

“The whole point was to open up opportunities,” said Evans, a Democrat who represents mostly black, working-class neighborhoods south of Chicago. A separate law allows people with violent felony convictions to become health care workers in some circumstances.

In Kentucky, a criminal justice bill sponsored by Republican Sen. Whitney Westerfield would prevent state licensing entities from rejecting applicants for a conviction that is not relevant to the license being sought. Ex-offenders would also get a hearing before they’re denied a license.

Westerfield said that some of Kentucky’s 60-odd licensing boards want to get rid of blanket bans on applicants with a criminal history. “You’ve got people who’ve applied for licenses, and the board wishes they could give one but they can’t,” he said.

And in Nebraska, a bill from Libertarian Sen. Laura Ebke that would let the state eliminate unnecessary licenses also mentions ex-offenders. “The goal is to really take a global look at how we’re licensing, how we’re regulating occupations, and see if there’s a way for us to rethink that,” Ebke said.

As well as giving the state the power to periodically review licensing rules, her bill would make it harder for licensing boards to reject felons — even those with relevant convictions. Before issuing a rejection, boards would have to determine that licensure would make the applicant more likely to commit another crime.

Ebke said she recently attended a Chamber of Commerce event where business leaders told her they supported her bill. “You have some people in business who say, ‘It’s way too hard for me to find employees because they have to be licensed,’ ” she said.

But professional associations aren’t always comfortable with proposals that go easy on felons. Illinois’ Evans initially included accountants and real estate agents in his bill, but took those occupations out after industry groups objected.

The Illinois Realtors Association argued that giving felons — including violent criminals and sex offenders — a license and thus the keys to private homes would endanger public safety and create legal problems for the industry. “The risk to our members and our clients was simply too high,” said Jon Broadbooks, director of communications for the association, in an email.

Cleaning Up the Loopholes

This year, Evans is among the Illinois lawmakers seeking to build on last year’s licensing changes by creating a set of standards more licensing agencies have to follow when they consider applicants with a criminal record.

He’s put forward a bill, for instance, that would require agencies to tell applicants they don’t need to disclose convictions that courts have “sealed,” or hidden from the public record.

Sealing records doesn’t end ex-offenders’ problems. Lewis has a sealed record, but he says it’s shown up on company background checks. Licensing agencies can look at sealed convictions. Although the records aren’t supposed to be a factor in their decisions, the Safer Foundation says agencies often reject applicants that fail to disclose a sealed record.

Evans’ bill also would require more licensing agencies to consider mitigating factors before they deny a license to a felon and to send a more detailed letter of explanation to applicants who are denied.

He has also filed a separate bill that specifically targets the Department of Insurance. It itemizes the types of records the agency can consider when reviewing an application from an ex-offender and requires it to consider evidence of the applicant’s rehabilitation.

Lewis, who is trying to re-enter the workforce after years of health problems, has been surprised to find that his arrest record can bar him from all kinds of jobs. He just applied for a job as a school crossing guard, a task he performed as a kid when school “patrol boys” were common, and is waiting to hear if he passed the background check.

“Is this new in America, or what?” he said. “It’s ridiculous. Judge me for my character as an individual.”