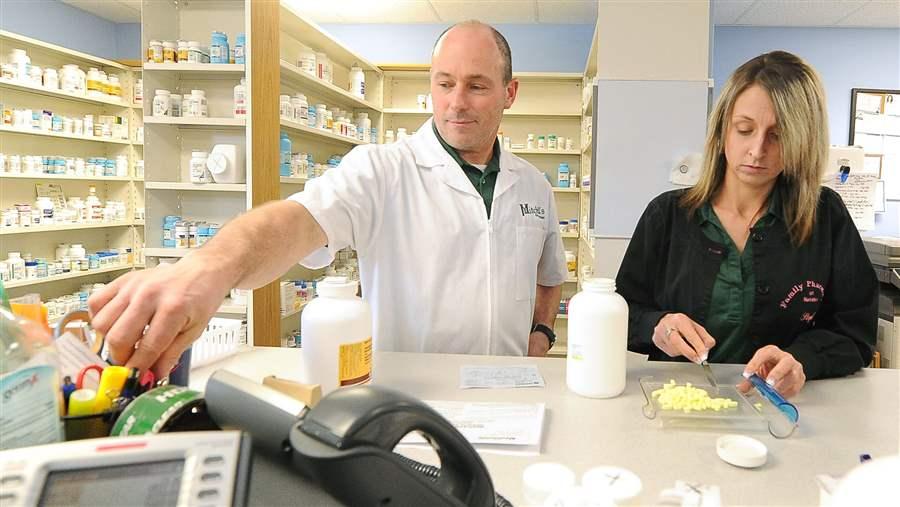 Pharmacy tech Stephanie Vanderpool works with pharmacist Tim Mitchell at his pharmacy in Neosho, Missouri. Mitchell supports the creation of a prescription drug monitoring program in his state, the only one in the nation without one.

Frustrated by the state’s inability to enact legislation to create an online prescription drug tracking system, St. Louis County, the city of St. Louis, Jackson County, St. Charles County and a handful of other Missouri counties have formed a consortium to create their own.

Every state except Missouri has a tracking system to try to prevent people seeking opioid painkillers from multiple doctors. Under the systems, pharmacists are required to check a database to make sure a patient isn’t already receiving the same painkiller from another prescriber before they fill a prescription.

Set to go online next month, the new Missouri database will cover nearly 2.5 million of the state’s 6 million residents.

More than 33,000 people, including 1,066 in Missouri, died of opioid and heroin overdoses in 2015, according to the Centers for Disease Control and Prevention.

Prescription drug databases have proven successful at curbing the kind of excessive opioid prescribing that led to the epidemic. In addition to preventing patients from “doctor shopping” for pills, the databases have been used to detect doctors who overprescribe the dangerous medications.

The monitoring program will cost St. Louis County about $78,000 annually. Other jurisdictions will pay based on the number of pharmacies and prescribers in their jurisdiction, with an annual price ranging from a few hundred dollars for smaller counties to $41,000 annually for the city of St. Louis.

Despite the successes of monitoring programs elsewhere, efforts to establish a statewide program in Missouri have repeatedly failed, largely a result of opposition from Republican state Sen. Rob Schaaf, a physician who has argued the systems are an invasion of privacy.