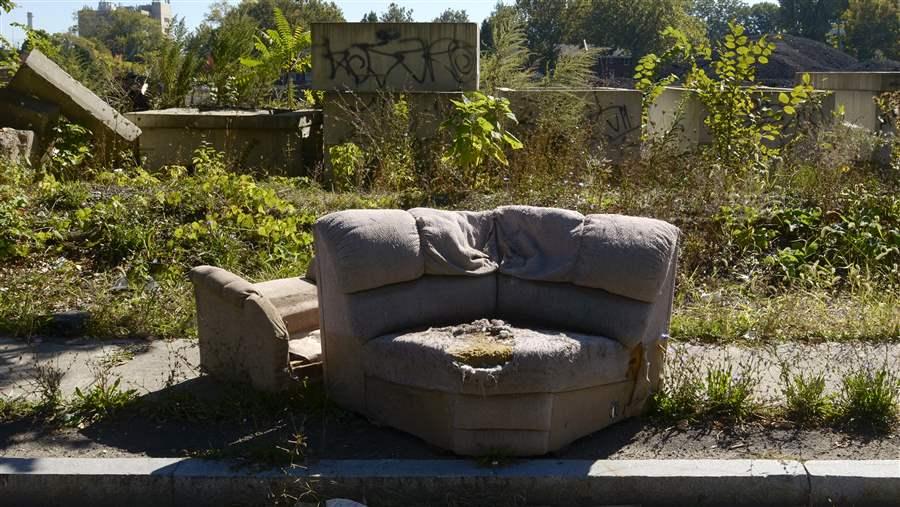 One of several couches that have been illegally dumped on a curb of a parking lot in Hartford, Connecticut. The City Council is trying to assess a higher property tax on blighted lots to spur development.

Downtown Hartford, Connecticut, has some lovely green space, Bushnell Park, at its center. But within a block or two are more than a dozen undeveloped lots, some of which are used for parking, while others sit empty. The City Council would like to levy higher property taxes on the lots as a way to encourage development.

It passed a resolution calling for a “land value tax” late last year. But Democratic Mayor Luke Bronin is still weighing whether to sign off on the tax, which is aimed at sprucing up Hartford’s city center and making it more inviting to visitors, businesses and shoppers.

The question in his mind is whether the tax would work as advertised in every instance. “In some cases you might spur development by making it [the land] more costly,” Bronin said. But in others, making improvements may not be cost-effective for landowners.

Other cities, notably Washington, D.C., and Pittsburgh, have experimented with “land value tax” assessments on property as a way to improve downtrodden areas and in some cases raise revenue. The taxes — higher levies on vacant property, which increases a landowner’s costs of holding on to unused, distressed property — are heralded as a way to eliminate blight and drive redevelopment. As added incentive, some land value tax mechanisms would lower property taxes on any new building on the property.

But the taxes are controversial, and not just because they only boost taxes for owners of distressed property. Critics argue that the taxes are helpful in a city where land values are increasing, such as Washington, but not so much in cities where values are stagnant, such as Pittsburgh. And they can be difficult to implement.

“The idea is if the land is taxed at a higher rate than the improvements, it gives a strong incentive not to sit on idle land,” said George McCarthy, president and CEO of the Lincoln Institute of Land Policy, a research group.

There are several variations on the tax, but Hartford’s would work like this: The city would put a high property tax assessment on undeveloped land, while at the same time lowering the rate for new buildings.

John Q. Gale, the city councilman who sponsored the tax resolution, said the taxing mechanism not only would make development easier, it would put the tax assessment for new buildings in Hartford at about the same rate as surrounding counties. Currently Hartford’s property taxes are higher than in the suburbs.

The goal, he said, is to make downtown more vibrant and inviting. “We can’t have these empty spaces all over town,” he said.

Joe Brennan, president and CEO of the Connecticut Business and Industry Association, a trade group, said a two-tiered tax system “raises a lot of concerns,” including whether it would actually work. “It creates more uncertainty and nobody convinced us it was going to be a good thing,” he said.

The trade group, in a blog post, noted that in 2009, the Connecticut Legislature authorized New London to undertake a two-tiered tax system. But the city decided against it, mostly because of arguments that it was unfair to certain types of businesses such as automobile dealers with large car lots.

While the development boom in Washington has resulted in some of the property being redeveloped and put on the market, some property owners have chosen to simply pay the tax, according to David Umansky, spokesman for the office of the chief financial officer. The District collected nearly $9.4 million in new taxes on the vacant property in fiscal 2016, he said. He did not have a figure for how much property has been upgraded.

One of the reasons that the tax works is that Washington is “a pretty hot market” right now, McCarthy said. Speculators are willing to pay up in order to keep the properties a little longer, figuring prices will continue to rise.

But it also appears that some owners of vacant property have tried to skirt the law by filing for exemptions, or asking for building permits and then never making improvements. Last month, the District Council approved a bill that increases penalties for not paying the tax and tightens regulations regarding how long a property owner can keep filing for exemptions.

“Property owners may keep their properties vacant or fail to maintain them because they expect property values to rise over time,” the bill said. But “these properties can become a burden to the surrounding community.”

Pennsylvania was one of the first states to allow municipalities to institute a two-tiered property tax system with one tax on the land and the other on improvements.

About 20 jurisdictions in Pennsylvania employ the two-tiered system. But others, including Pittsburgh, have mostly abandoned it.

Pittsburgh used the system from 1913 to 1981 throughout the city. Now, a form of the land value tax applies only to Pittsburgh’s “improvement district,” which encompasses the downtown and assesses businesses for services such as litter pickup and extra safety patrols.

Pittsburgh Finance Director Paul Leger said the city abandoned the comprehensive two-tier tax in 1981 because it had achieved its purpose of driving downtown building development and because it could be challenged in court as possibly violating a state constitutional requirement that taxation should be uniform.

Chris Sandvig, director of policy at the Pittsburgh Community Reinvestment Group, a nonprofit that focuses on affordable housing, said a vacant property tax is not necessarily the best way to solve housing problems in his city, where there are about 10,000 vacant or abandoned parcels. Many owners simply don’t pay their taxes and the city seizes the property.

A better solution to blight, he said, is a “land bank,” which could acquire vacant property and put it to use either as a renovated home or even a green space in a neighborhood. The city is seeking to launch and finance a land bank.

Dean Baker, co-director of the Center for Economic and Policy Research, a left-leaning think tank, said land value taxes push property owners “to do something.”

“You want it to be used,” he said of the vacant property. “The more property that is out there being used puts downward pressure on prices, which is good for affordable housing.”

Nowhere in North America is that more clear than in Vancouver, British Columbia.

It’s not blight that has prompted Vancouver to tax vacant property, but a shortage of rental housing.

Vancouver has a rental vacancy rate of 0.8 percent in a city where half the residents rent, said Kathleen Llewellyn-Thomas, manager of housing policy. But many condos or apartments are sitting empty because foreign investors have seized on Vancouver real estate as a good place to put their money.

“In a certain part of town,” Llewellyn-Thomas said, “there are skyscrapers filled with condos and nobody’s home.”

The city this year imposed an “empty homes tax” that assesses a 1 percent surtax on any residence that is not considered the owner or a renter’s “primary residence.” For a $750,000 residence, for example, the surtax would add about $7,500 in U.S. dollars to what otherwise is about a $2,400 property tax bill.

“Our goal is to encourage property owners to rent out their vacant homes and raise the vacancy rate, and thereby lower rental prices,” she said.