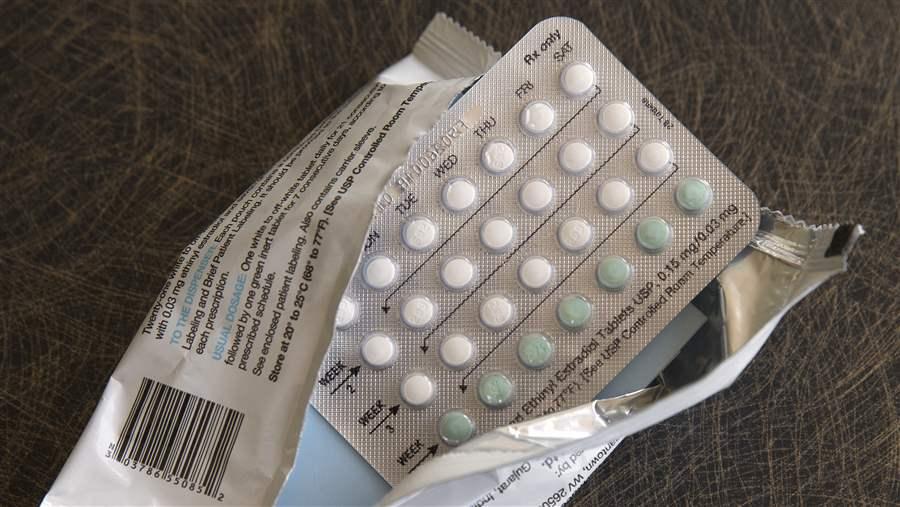 Mary Bonheimer wants to wait a few years before having another child. Uninsured and working part-time as a waitress so she and her fiancé can split time caring for their 18-month-old daughter, she plans to stay on birth control pills for now.

But Bonheimer, 22, and her friends in Warsaw, Indiana, are worried that the local family planning clinic might shut down under new policies put forward by President Donald Trump’s administration. Her sister had a hormonal implant inserted into her arm that will provide birth control for three years, Bonheimer said. Other women she knows are switching to intrauterine devices (IUDs) and other long-acting contraceptives to ensure they are protected against an unwanted pregnancy for as long as possible.

In Indiana, appointments for long-acting birth control methods have jumped by more than 50 percent compared to last year, said Kristin Adams, CEO of the Indiana Family Health Council, which oversees federal and state funding for family planning clinics in the state, including at the Warsaw center.

“We’re hearing some patients who have a long-acting device that’s good for only three years tell us to rip it out and put in the 10-year plan,” Adams said. “It’s a sad state of affairs that women have to put off childbearing for 10 years because they’re afraid of losing their insurance.”

In state capitols, lawmakers are responding.

As a hedge against the Trump administration’s promise to rewrite the Affordable Care Act (ACA) and a House resolution that would allow federal funds to be withheld from family planning groups that provide abortions, legislators in several states are proposing laws that would require all insurers, including Medicaid, to pay for contraceptive services without copays and without delays.

Other proposals, although not a direct response to Trump administration policies, would give women greater access to contraception.

New bills in more than a dozen states would allow women to stockpile a year’s worth of birth control pills with one visit to a pharmacy, making it less likely that their supply will run out and they stop taking them because they can’t pay for them.

Other bills in a handful of states would allow pharmacists to prescribe pills and other forms of hormonal birth control without requiring the delay and cost of a doctor’s visit.

Advocates for greater access to contraception attribute the nation’s 26 percent drop in the rate of abortions between 2008 and 2014 to greater use of highly effective contraception methods. The rate of unplanned pregnancies declined during the same period, as well. Abortion opponents, however, argue that reduced abortion rates are due to stricter state abortion laws. 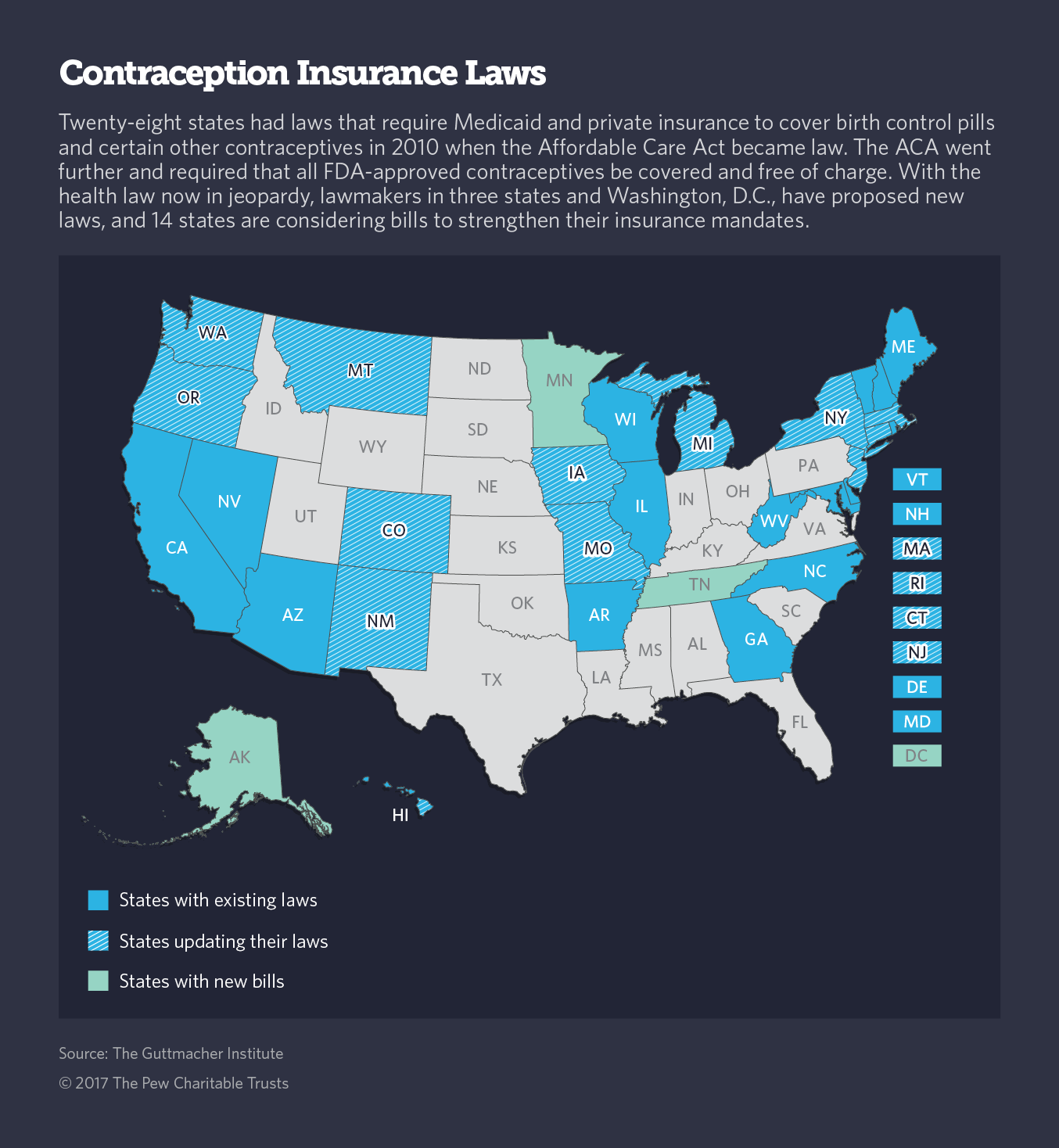 Like roughly 8 million women nationwide, Bonheimer receives publicly funded birth control services. But the local clinic that provides her the services, the Warsaw Family Health Center, and nearly 7,700 others across the nation may soon start to disappear, cautioned Bill Albert, chief program officer for the National Campaign to Prevent Teen and Unplanned Pregnancy, which advocates for greater access to contraception.

If federal funding for family planning services is cut, and if Medicaid reimbursements decline under an ACA replacement law, Albert and other advocates for women’s health say many thinly financed clinics may have to close their doors. That’s already happening in Indiana, Adams said.

The Jan. 21 Women’s March on Washington and other grassroots women’s movements that have sprung up since the November election have raised awareness of the potential for funding cuts to Planned Parenthood and other family planning centers under the new administration and Republican-led Congress.

“We’ve been hearing from doctors and other providers over the past several months that many women are concerned that the contraceptive coverage now available to them will vanish,” Albert said.

Low-income women who rely on Medicaid or federally subsidized family planning services are most concerned, he said. Like everyone else, they’re hearing that funding for reproductive health centers could dry up. “But the monster in the room is repeal of the ACA.”

Albert said increased demand for contraception is usually welcomed because it can lead to a reduction in unplanned pregnancies. But family planning clinics have been underfunded for so long that they aren’t able to take advantage of the recent surge, he said. Federal funding for contraceptive services have remained flat or declined since 2005, despite increases in drug and device costs.

In Indiana, an estimated 446,000 low-income women in their childbearing years are unable to pay for birth control. But clinics in the state are only able to serve about 30,000 of them, according to Adams of the Indiana Family Health Council.

“Flat funding means we can’t maintain quality staff and we can’t keep up with inflation of drug and labor costs. So we’ve had to close clinics,” she said. Three of the state’s 35 family planning centers have closed since 2014, she said.

Currently, contraception is considered preventive care under the ACA, which means Medicaid and commercial insurers must pay for it at no charge to the patient. The federal health law calls for coverage of all forms of contraception approved by the U.S. Food and Drug Administration, including female sterilization, without requiring women to try the cheapest birth control method first, as is often required by insurers for other medical services.

But the U.S. Department of Health and Human Services has the discretion to remove contraception from the list of preventive services covered by the ACA. The National Campaign and other advocates for women’s health worry that Trump’s HHS secretary, Tom Price, who has said federal funding for birth control is unnecessary and that providing it violates religious freedoms, could delete it from the ACA’s preventive care list.

In addition, proposed GOP changes to Medicaid that would limit the amount of federal money sent to each state could mean states would lower reimbursement rates for contraception and many women would lose Medicaid coverage altogether.

Republicans in Congress also have repeatedly called for elimination of the roughly $300 million grant program known as Title X that funds Planned Parenthood and other local family planning clinics like the one in Warsaw.

Birth control pills, developed in the early 1960s, remain the predominant form of contraception in the U.S., particularly for young women. The daily pills are also the cheapest method, other than condoms. But more expensive longer-lasting methods, including IUDs, hormonal implants, injections, patches and vaginal rings are growing in popularity.

Research shows that longer-lasting methods, which can provide protection for three to 12 years, are the most effective form of birth control, resulting in fewer than one pregnancy per 100 women in a year compared to nine pregnancies per 100 women who take the pill.

At least 38 million women of reproductive age (13 to 44) need contraceptive services because they are sexually active and do not want to become pregnant, according to the Guttmacher Institute, which collects and analyzes data on women’s reproductive health. In 2014, more than half of them, an estimated 20 million, needed subsidized services because they were unable to purchase contraception on their own. Thirty-nine percent of those received care at federally funded clinics or from private practice doctors serving Medicaid enrollees.

For state Medicaid programs, which pay for 75 percent of all subsidized family planning services and nearly half of all births, preventing unintended pregnancies makes financial sense.

Nationally, for every dollar spent on publicly funded family services, $4.02 in Medicaid expenses are saved because unintended births are avoided, according to the National Partnership for Women and Families. Total public expenditures on unintended pregnancies in the U.S. were estimated to be $21 billion in 2010 — $14.6 billion from the federal government and $6.4 billion from states.

In the late 1990s, states began enacting laws that required insurers to cover contraception. Until then, most women had to pay for the pill on their own.

As of 2010, when the ACA made contraception coverage a federal mandate, 28 states had enacted similar, but weaker, requirements. Many of the laws allowed insurers to opt out for religious reasons and most did not require coverage of all methods of contraception without a copay.

This year, facing the likelihood that Republicans in Congress will repeal the ACA and replace it with a new health law, 14 of the 28 states with insurance mandates are considering legislative proposals to align their laws more closely with the broad coverage requirements of the ACA.

In addition, three states — Alaska, Minnesota and Tennessee — and the District of Columbia are considering new insurance mandates for contraception.

Elizabeth Nash, who tracks state reproductive health laws at Guttmacher, said state legislative activity this year and last has intensified. States have sought to make contraception more available, particularly to low-income women and teens, for decades. But many states have stepped up the efforts.

Since 2015, California, the District of Columbia, Hawaii, Illinois, Maryland and Vermont have enacted 12-month prescription requirements to make it easier and cheaper for women to stay on the pill continuously, which substantially enhances its effectiveness at preventing pregnancy. (In all states but Maryland the laws have taken effect. Maryland’s law takes effect in 2018.)